“Now this is a story all about how my life got flipped turn upside down.”

So I was stone cold chilling this week, as I am prone to do, and it occurred to me that a lot more peeps were wearing red and PDA came to mean more than Pam Anderson’s initials to me. I saw couples everywhere giving each other those little cute nose rubs, the kind that makes you say “Aww” if you’re in a relationship, or conversely the kind that makes you wonder why they ever created five-day waiting periods for handguns if you’re like most of us.

Amidst all this turbulence, my brain was a wreck. I had no idea whether I was coming or going. Georgetown Basketball, after a promising start against such dynamite squads as Morgan State and Lousville (who is proving nightly that Denny Crum should have walked away after Nervous Pervis), was reeling. The Dallas Mavericks are exciting. The NBA All Star game was close and actually fun to watch. Desmond Mason was the Slam Dunk Champion?

I staggered around campus. My world was in a tizzy. And then it all became sickeningly clear as I crossed Copley Lawn one fine early afternoon.

Approaching in the other direction was a young male clad in a black fleece, marked by his trademark gait and wide, beaming smile. This young man happens to reside in the same apartment as the editor of this section, and as he passed me en route to the Henle Village, he extended five fingers for the pound and as flesh hit flesh, he dropped it, simply: “Happy V-Day, bro”

Then there was a laugh and like the phantom that he is, the young man was gone. At this moment it all became crystal clear. It was Valentine’s Day, long associated with lovey-dovey couples, fancy dinners, Hallmark and much bloodshed. And long associated with a crying 12-year old on the steps of a church, a sportjacket discarded next to him.

The year was 1992, and the day was February 14th. The scene was St. Ignatius Church in New York City, and the boy was a striking young chap named Ted Bauer. Now, to be fair, that last sentence would have made more sense if you removed the word “striking.” At this point, I was a tiny yet fat kid who always wore clothes that didn’t match and didn’t know how to discuss anything of interest to my peers. Sure, I used to go to Alex’s Cards and Comics with some kids after school on Fridays, but as I thumbed through Archie and wondered if he would choose Betty, or recited random facts about Captain America and Wolverine, Eddie Simmons always knew who Grant Hill was, or why Troy Aikman was so good.

Eddie Simmons was cool. For me, in 1992, he was the essence of cool. Although when I look back today, he was just a gangly nerd who acted pretty knowledgeable about sports and girls and knew how to command a bunch of kids who he called his posse (read: drooling idiots who followed him around). Nevertheless, I had spent the better part of sixth grade attempting to be Eddie Simmons’ best friend. Of course it never worked, but here was my chance.

It was a Valentine’s Day dance with the all-girls schools in the area and a few other all-boys schools (yah, I went to an all-boys school until 8th grade, which explains a lot about me). So there I was, rolling in like a whirlwind, hands waving, pretending I knew people all over the room as my off-kilter tie and belt (which was probably around my nipples) gave me away as a fraud.

I followed Eddie Simmons for most of the night as he winked at a few cute girls who laughed coyly and then whispered something to their friends, which was followed by a trip to the bathroom. They were always in a group, of course, even at age 12. Then magic happened, and to this day I’m not sure what caused it or where it came from: I was asked to dance.

Yes, me. Ted Bauer, awkward, poorly dressed, gangly fat kid, got asked to dance. Kathleen Moore was her name, gangly too, but a tall girl, fairly attractive, at least relative to me at the time. And we danced. Oh, if you’ve ever seen me dance at college, let me just tell you the horrible truth that I was even worse circa 1992. So there I was, the essence of burgeoning manhood at 12, bouncing around the room like a pinball with many eyes gazed upon me in sheer terror.

After that workout, I needed some water. So I strolled over to the water table, my head probably bigger than the entire church at this point, filled up my paper cup, chugged it and turned around.

I was elated when my eyes fell upon Kathleen. She was talking to Eddie Simmons. Here it was. Here was my shining moment. For seven months, I had tried to be his best friend, and now he was over there telling her how cool I was, how she should dance with me again. I was gonna go over there and throw an arm around him as if we were teammates, maybe even drop an inside joke or two that I had heard him use with some other kids.

Only when I got over there, all I heard was a laugh as Eddie slinked away and then Kathleen told me I wasn’t cool enough for her according to Eddie, and moments later I was sobbing on the stoop outside the church with the sportjacket beside me.

So you might ask yourself, all this and what does this have to do with sports? It’s quite simple. I went back in the dance and decided to do a little survey about why I wasn’t cool. The answer I got the most?

“Well, it’s like, you can’t, ya know, really talk about sports.”

That was funny, I thought. Because I clearly had been watching sports for as long as I could remember. I just had to be able to BS about them, eh? So as Bryan Adams came on full blast and the six kids willing to slow dance tripped the light fantastic, I returned the six blocks to my home and busted out the NBA Encyclopedia. If I needed to know more, so be it. I was going to be cool.

So now it’s 2000. I’m not really cool, I still dress badly, girls still don’t dance with me and I don’t think anyone’s confusing me with Brad Pitt, but I can tell you who Eduardo Najera is, and that’s all that matters.

“And I’d like to take a minute, just sit right there, I’ll tell you how I became the Fresh Prince of a town called Voice Sports.” 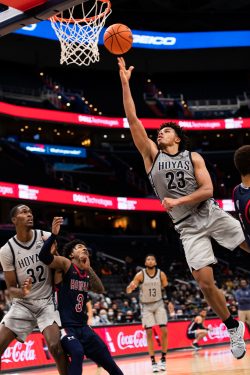