In a country where people are denied the right to travel without even being accused of a crime and government agents can secretly monitor your reading habits, it’s not surprising that an Islamic scholar like Tariq Ramadan was denied entry to the U.S. The draconian “ideological exclusion” clause of the Patriot Act bars him from entering the U.S. for his controversial opinion and associations. But thank God for satellite video-conferencing and thank Georgetown for using it to circumvent the Patriot Act.

Ramadan is an Islamic scholar who has often criticized U.S. policy in the Middle East, but he is more well-known for his work trying to integrate Muslim and Western identity. He was offered a professorship at Notre Dame in 2003. Because of a donation to a charity that later gave money to Hamas, Ramadan was denied a visa to enter the U.S. and had to forfeit the position. The charity was not black-listed by the U.S. at the time he made the donation. Whether or not Ramadan is sympathetic to terrorists, it is obvious that any known connections between Ramadan and terrorism are tenuous at best. They certainly are not sufficient cause for denying him entry on the basis of security.

The “ideological exclusion” clause denies entry to the U.S. to those that “persuade others to support terrorist activity or a terrorist organization, in a way that the Secretary of State has determined undermines United States efforts to reduce or eliminate terrorist activities.” That this decision lies with the Secretary of State is another example of the executive branch having too much power. The idea that someone can be banned for persuading others is a basis for keeping people out of the U.S. for the simple reason that they have a different opinion than the government.

Though the Patriot Act was a stroke of brilliant expediency by the Bush Administration to boost executive power, Congress passed the law, and equal blame falls on every member of Congress who did not carefully read the entire Patriot Act before voting on it. Though the 700+ page legislation was intimidating, we are all paying for their blind faith that the executive branch would not attempt to abuse its power. They should be ashamed at their negligence. The next time a mammoth-sized, vaguely titled bill comes down the pipes, they should examine it more closely.

Fortunately, Georgetown found a way to bring Ramadan’s views to campus, even when the government has tried to suppress them. Notre Dame ought to borrow a play from SFS-Qatar by inviting Ramadan to teach by telecommuting via satellite to students. Now if we could only get President Bush to telecommunicate to the Muslim World, we would reach true inter-religious understanding. 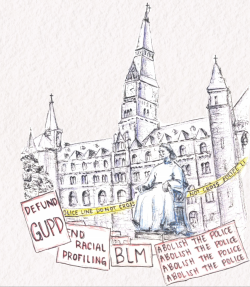