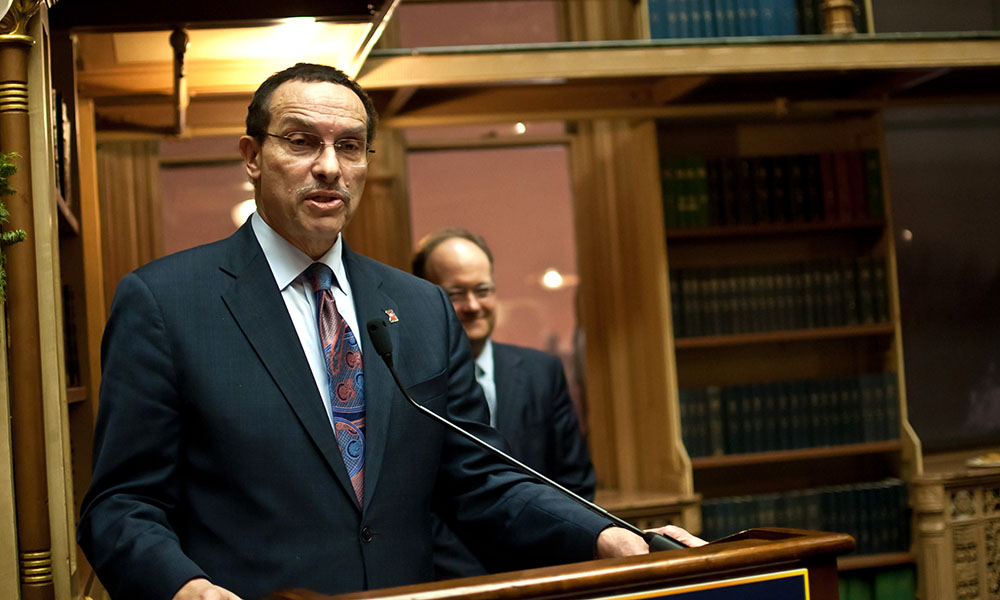 On April 23, D.C. residents may finally fulfill that age-old American revolutionary demand,  “no taxation without representation.” During a special election, residents of the District of Columbia will have the chance to vote on Home Rule Charter Amendment 8, a ballot measure that would sever all ties between the District’s budgeting process and Congressional control. Last Thursday,  D.C. Votes, an organization advocating for budget autonomy for D.C., initiated its “Yes on 8” campaign to encourage people to come out and vote on Referendum 8.

“We have established a campaign committee called The Committee for D.C. Budget Freedom to run a campaign throughout the city and contact people who are going to be doing the usual campaign activities,” said James Jones, the communications director for D.C. Votes.

Referendum 8, if passed, would amend language in the 1973 Home Rule Charter to give the District government autonomous control over the $4 billion it collects each year in local tax revenue. The change would go into effect unless Congress and the president block it, which is considered unlikely given President Barack Obama’s stated support for D.C. budget rights. Under the new process, Congress would continue to have a 35-day review period for the D.C. budget, but it would have to vote retroactively to amend the funding proposal, rather than voting to pass it outright.

This referendum is not the first time that D.C. has tried to win autonomy over its budget. The D.C. Council advocated aggressively for a bill in the Senate that would have given D.C. budget autonomy, but last minute amendments added by Sen. Rand Paul (R-Ky.) concerning abortion, guns, and labor unions killed support for the bill.

Referendum 8 shows a paradigm shift in the battle for D.C. budget autonomy because this would be the first time that D.C. residents would be voting on it.

“This is the first time that D.C. residents are able to take the issue of self-determination for D.C. into their hands,” Jones said. “Special elections like this are traditionally low turn-out elections, but we see this as an opportunity to engage people who may not normally vote in special elections.”

D.C. Votes envisions the referendum as the next step in the fight for budget autonomy now that the bill in Congress has failed to pass. “We looked at this as a second track in a two track strategy. D.C. Votes and all of the organizations who support this approach, as well as the members of the council who unanimously supported it are continuing to press for legislation in Congress,” Jones said. “If we can’t get it done in Congress, then we have another way of achieving it. We also believe that this could encourage movement in Congress.”

However, some prominent D.C. figures, such as Mayor Vincent Gray, have doubts about the referendum. They contend the Home Rule Charter specifically prevents changes like those the D.C. Council is trying to enact, citing section 603(a), which states, “Nothing in this Act shall be construed as making any change in existing law, regulation, or basic procedure and practice’ regarding ‘the preparation, review, submission, examination, authorization and appropriation of the total budget of the District of Columbia government.’”

In December, Gray sent D.C. Councilman Phil Mendelson (D-At-Large) a letter outlining his objections. “I am doubtful,” he wrote, “that Congress has delegated the power to the District to convert unilaterally the role played by Congress and the President in the District’s budget from active participation to passive review.”

Even so, Gray’s office says he is supportive of the idea behind the referendum. “Though he has expressed reservations about the legality of the referendum and whether it would stand up to a challenge by Congress or in court, he urges District residents to support it,” wrote Doxie A. McCoy, the Senior Communications Manager for the mayor in an email to the Voice.

Jones acknowledges the contributions Gray has made for the movement to bring budget autonomy to D.C., but he believes that the repeated failures to pass a bill through Congress have forced D.C. to switch plans.

Gray has not been the only prominent member of the D.C. government who has shown concerns for Referendum 8. As The Washington Post has reported, Irving B. Nathan, D.C.’s own attorney general, believes the referendum may be illegal.

D.C. Vote remains confident that this referendum will overwhelmingly pass, and Jones even welcomes a fight on the legal grounds of budget autonomy. “Based on our legal advice from some of the top law firms in town with some of the top constitutional lawyers, we believe that we can defend this and that anyone who wants to come at us from a legal standpoint has to understand that they are going to have a fight on their hands.”