Women’s soccer to face No. 1 UVA

The Georgetown Women’s Soccer team (16-2-2, 7-1-1 Big East) used Shaw Field to their advantage on Saturday, beating LaSalle (15-5-3, 5-2-1 Atlantic-10) by a score of 2-0 in the first round of the NCAA Tournament.  The game was a milestone for the program, as it marks the first NCAA Tournament game the Hoyas have played at home.

“Well, you know, it’s one of those games when you lose and your season’s over. And for seniors, you lose and your career is over,” said Georgetown Head Coach Dave Nolan. “So there’s far more to it and there’s far more nerves for both teams because there is far more at stake. So that’s why it’s really important to try and have home field advantage where you’re familiar with things and there is less distractions.  Now it’s just do or die.”

The Hoyas started off the game with the more dangerous part of the possession, which eventually resulted in a goal by junior forward Vanessa Skrumbis with 18’ remaining in the first half. Senior forward Colleen Dinn made a run to the end line before hitting a low cross in Skrumbis’ direction. LaSalle goalie Jessica Wiggins got a piece of the cross, but Skrumbis took the rebound and managed to just get the ball across the goal line to give the Hoyas the 1-0 lead.

LaSalle’s desperation grew after the Hoyas doubled their lead early in the second half on a beautiful half-volley from sophomore midfielder Marina Paul. The goal came as Paul headed down the ball off of a cross. It then bounced around the penalty area before falling for her to strike from 10 yards out.

“I do think ultimately it probably took the wind out of their sails. I mean, Paul’s (Paul Royal, LaSalle Head Coach) a great coach and he’s a master motivator so I’m sure his halftime speech was about, ‘These first 10 or 15 minutes, let’s just go for it.’ And then after we got that goal I think the players are like, ‘Well how much do we have to go for it now?’  So it was key,” said Coach Nolan, discussing the second goal.

From there the focus turned to defending, and the Hoyas managed to preserve sophomore goalie Emma Newins’ shutout by controlling their half of the field for the remainder of the game.

“For them it’s more helter-skelter, it’s more taking chances, it’s more about being a little bit reckless. And that always puts us on the back foot. But I felt for all the kinds of balls that they had I didn’t really ever feel like they ever really looked like they were going to score,” Nolan said.

The Hoyas face a difficult battle ahead of them, as they travel on Friday to face Virginia (21-1, 13-0 ACC).

“Obviously they’re the No. 1 seed.  They’re having a great season. But the good thing is that they play good soccer.  And we always do well against teams that play soccer because we play soccer too. It’s not going to be easy, but we’ve played them down there enough times where we’re comfortable and we’re familiar with the field,” Nolan said. 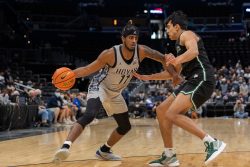