After a tepid fifth place finish in the Puerto Rico Tip-Off, the Georgetown men’s basketball team (4-2, 0-0 Big East) returned to Stateside ready to tackle a slate of non-conference matchups, with the first one last Saturday against the Lipscomb Bisons (3-4, 0-0 A-Sun), a relative unknown in the college basketball world with no NCAA tournament appearances to their name. By comparison, the Hoyas boast seven NCAA tournament appearances under current Head Coach John Thompson III alone, a talent gap that should have indicated an easy win for the Hoyas entering the matchup.

Early on, however, the Blue and Gray struggled to build any lead against the Bisons, who ended the first half on a 7-0 run, cutting Georgetown’s lead to just one point entering the break. Slow starts, which have been apparent in numerous games this season, are something Thompson is striving to correct sooner rather than later.

“I think we know what we need to do to win games. We have to continue to get better,” said Thompson. “We have to get to the point where the other team can’t score. It is just as simple as that. Every shot that the other team gets is a tough, contested shot and then we get the rebound. If we do that, then everything else will fall into place.”

In a remarkably faster-paced second half, Georgetown jumped out on a 14-0 run, holding Lipscomb scoreless for the half’s first six minutes, en route to a 70-49 victory. Saturday’s win marked the Hoyas’ third straight win as well as their 45th consecutive non-conference win at Verizon Center.

The Hoyas were aided by another dominant performance by sophomore guard D’Vauntes Smith Rivera, who poured in 17 points along with eight rebounds and seven assists. Rivera, who is averaging 21.4 points per game since scoring only five in the season opener against Oregon, has emerged as the Hoyas’ most reliable scorer.

“It was good to see him finally throw some passes and get some rebounds. He has a knack for that,” said Thompson after the win. “He is a very good rebounder. … The seven assists and eight rebounds is something we need more of.”

Next up for the Hoyas is a game with the Panthers of High Point (3-3, 0-0 Big South) this Thursday at the Verizon Center at 9 p.m. High Point is led by 6-foot-8, 215-pound sophomore forward John Brown, who averages an impressive 21.7 points per game along with 9.8 rebounds a game. Brown will be a true test for junior big men Josh Smith and Mikael Hopkins, who have been able to dominate smaller opponents thus far.

“They can play with anybody in the country,” Thompson said. “They do a good job with their spacing, I think. It’s another team that we could have a challenge with. They spread you out and so we are going to have to chase. Our bigs, especially Josh, are going to have to be out on the perimeter guarding.”

After their matchup with High Point, the Hoyas will welcome Colgate (4-2, 0-0) to the Verizon Center on Saturday, followed by a ten-day respite due to final exams. 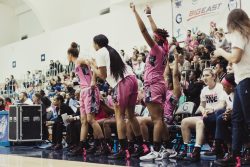