While the visitors were certainly capable of competing with the Hoyas, some bad luck early in the game put them behind 1-0. After only 11 minutes, an errant Georgetown shot in the box ricocheted off an unfortunate Wolfpack defender for an own goal.

“We got a fortuitous bounce that put us up 1-0 and allowed us to settle and got them thinking it was going to be a long day,” said Georgetown Head Coach Dave Nolan.

The game then fell into a stalemate in which neither side seemed inclined to score. That is, until junior midfielder Marina Paul added a second goal off a beautiful corner kick from senior midfielder Daphne Corboz.

“We got a goal five minutes before the break, and I knew the third goal was going to be the decider,” said Nolan.

The Hoyas added a crucial third goal only minutes into the second half. Following a beautiful through ball from Corboz to senior forward Vanessa Skrumbis, the Hoyas added the crucial goal to go up 3-0. And that is when the floodgates opened.

Skrumbis then turned provider for Corboz, as she set up the fourth goal by feeding her teammate, cutting the ball to her left and rocketing it into the top left corner of the net. Skrumbis and graduate forward Kaitlin Bast added another two goals to the scoreline before the 90 minutes were up, completing what became another routine Hoya thrashing of lesser opposition.

In a game defined by unfortunate turns and tough breaks for N.C. State, Corboz’s lone goal was by far the most definitive of the contest. In her four years on the Hilltop, Corboz has become an indispensable piece of the Georgetown lineup.

What some Hoya fans might not realize is that Daphne’s younger sister, Rachel Corboz, is now also on Coach Nolan’s roster. Both sisters saw game time this weekend, and Nolan is hoping that Rachel can fill her sibling’s shoes once she graduates.

With spirits obviously running high for Georgetown after such an impressive victory, the Hoyas were back at it against regional rival Towson (1-2-1, 0-0 CAA) last Sunday. Georgetown was victorious once again by an impressive margin, disposing of the Tigers 5-0 on the road.

“We talked before the game about coming out fast and getting on top of them. And to our credit, the kids came out with a tempo and played at a pace [Towson] hadn’t seen this season,” said Nolan.

After a mere ten minutes of action, the Hoyas had blitzed Towson to a scoreline of 3-0, effectively ending the match only minutes after it started. Once again, Skrumbis and Daphne Corboz were the main contributors to the day’s success. Amazingly, Skrumbis managed to put her name on the scoresheet twice in the ninth minute. She scored her first from a defensive lapse that allowed Rachel Corboz to put her through on net and then nailed her second off of a long ball that the Tigers failed to defend. All in all, she would put the game almost to rest in the span of 36 seconds.

After 25 minutes of respite for Towson, Daphne Corboz added to the scoreline with an impressive left-footed goal of her own. Not to be outdone, Rachel Corboz took the opportunity to score her first collegiate goal. Receiving the ball from well outside the box, she launched a long-range shot that clipped off the bottom of the crossbar and in, capping an impressive Georgetown victory with an important milestone for one of its most promising player.

“I was really happy to see Rachel get that goal, I think that’s going to do a world of good for her confidence” said Nolan.

Skrumbis was named Big East player of the week for her stunning performances over the weekend. She’s the second Hoya to earn conference honors after senior goalkeeper Emma Newins was named Big East Defensive Player of the Week. Her two goals against Towson marked the third time this season that she has scored two goals in a game. If both Skrumbis and Corboz can maintain their performance, the Hoyas could be looking at a run deep into the postseason.

Rachel Corboz’s continued contributions certainly wouldn’t hurt their chances. She could take up her sister’s mantle as team talisman upon Daphne’s graduation. For the time being, fans should be thankful the sisters are combining to devestating effect. 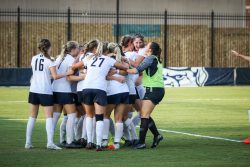