At the helm with Nevin Snow

This past summer, four members of the Georgetown sailing team represented America at the World University Championships in Italy, defeating defending champions Australia in the finals to take home first place. The Voice sat down with one of those four, Nevin Snow (COL ‘16), to learn a little about the dedication required to become a world champion.

Voice: Can you take me through what an average day of training looks like for you?

Voice: What exactly does a sailing practice involve?

Snow: We’ll do a warm-up, just like any other sport would. We’ll do some tacks and jibes in the boats. And kind of just get familiar with whatever person we’re sailing with in the boats … And each practice is different, like Tuesdays, we’ll work on boat handling. Wednesdays are boat speed day, so everyone lines up. We’ll sail for an extended period of time to see which boat is going faster, and the coach will ask that boat ‘what are you doing?’ as compared to a boat that’s going slower. Thursdays we have a mock race day. And Fridays could be any one of those three.

Voice: How long does your season go? 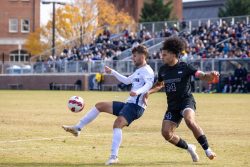