Kobe Bryant is having the worst year of his career.  He recently broke John Havlicek’s record for the most missed field goals of all-time.  Supporters of the Black Mamba insist that Kobe’s spot on top the all-time miss list is simply a side effect of a nineteen-year career, and that his number four spot on the scoring list is well worth the misses.

But I look at it a different way.  Kobe is quickly approaching Michael Jordan’s number three spot.  Kobe has already taken more shots than Jordan did in his entire career.  And yet Jordan is still in front, for now.  Kobe’s newest achievement is not so much the product of a long career, but the result of a mediocre field-goal percentage.  With the exception of Elvin Hayes, every other player on the top-ten scoring list has a better field-goal percentage than Kobe Bryant.  Kobe is a career .453 shooter, and .334 from long-range.  He has never shot over 50% in his life.   This year he’s shooting .391, and .281 from behind the arc.  I’m not saying Kobe isn’t talented.  But I am saying he’s a stat-crazed ball-hog that hurts his team by chucking up forced shot after forced shot.  So while many are comparing Kobe to the all-time greats, I will conduct a slightly different comparison.

Kobe resigned with the Lakers last year at the age 35 for $48.5 million. Lakers general manager Mitch Kupchak made a terrible mistake.  Right now, Kobe could not start on many teams in the league.  After another year of wear and tear, a 37-year old Kobe could be even less productive.  Instead, Kupchak should have pursued a wiser, more creative signing—a grilled cheese sandwich.  Let’s see how Kobe and the sandwich stack up.

Wrists, ankles, back, fingers, knees…you name it, Kobe’s hurt it.  And it’s cost him playing time.  Over the past nineteen years, the Lakers have spent a lot of money on someone who’s had to take a lot of time off.  A grilled cheese sandwich does not share our fragile human anatomy.  But the irresistible aroma of a grilled cheese may cause an opposing player to sneak a bite during a time-out.  This is a very real potential for a career-ending injury for the grilled cheese.  I’ll give this one to Kobe.  Kobe-1 GC-1

Kobe Bryant is making $23.5 million this year for his disappointing play.  Kobe’s performance is nowhere near that kind of dough.  On the other hand, the ingredients for one grilled cheese sandwich cost about two bucks.  Talk about cap space.  Without the highest-paid player in the league, the Lakers would have plenty of room to add more top-tier talent to the roster.  It’s simple math.  Kobe-1 GC-3

Kobe has the obvious edge here.  He’ll get his 25 points per game, even if it takes him 22 shots to do it.  Though much can be said for selfless play, a grilled cheese sandwich doesn’t do much scoring.  Kobe-2 GC-3

A grilled cheese sandwich is high in calcium, protein, fat, and fiber, all of which humans need to survive.  The nutritional studies on Kobe Bryant have yet to publish their results.  Point grilled cheese.  Kobe-2 GC-4

There is a clear winner here.  Kupchak should not have resigned Kobe.  He will continue to overpay Kobe to reach more personal milestones and fail to make the playoffs until 2016.  He should have closed the file on the Kobe era years ago.  Yes, Kobe has won five championships with the Lakers.  But right now, he’s the biggest thing standing in their way. 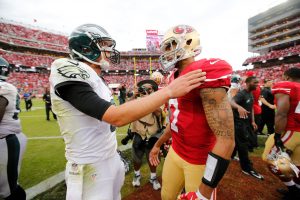 All in for Kaep!

Turd Turgenson is a Turd

This is the kind of ground breaking research I come to halftime for. Bravo!