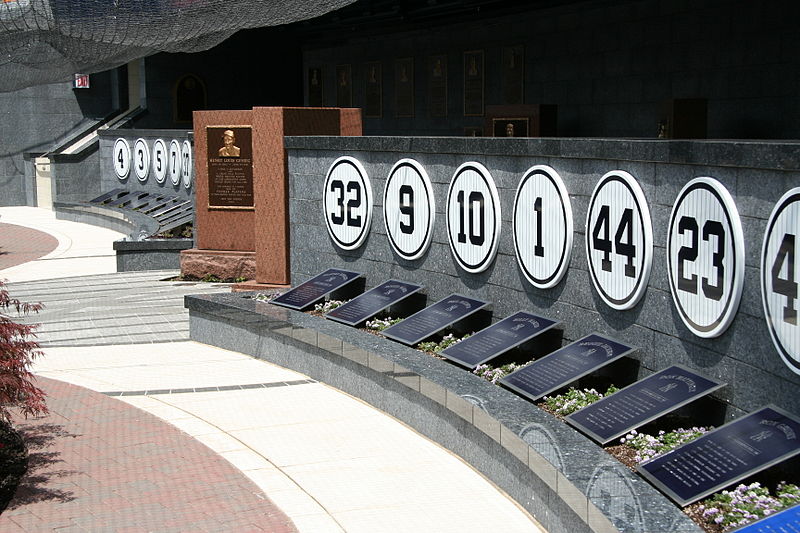 This summer, the New York Yankees held ceremonies to retire the jersey numbers of Bernie Williams, Jorge Posada, and Andy Pettitte. Their 21 retirements are, by far, the most in the Major Leagues. All single digits are retired with the exception of #2 (not for long; see below), which, if retired this season, would be the fifth number put to rest over the past two years.

The Yankees retire numbers with almost as much gusto as they throw money at washed up free-agents, which makes it difficult to pinpoint what other Bronx Bombers will be retired over the next few years. I’ll attempt to predict how many other current/former Yankees will end up in Monument Park. Then, we can only wonder how long it will take for the Yankees to resort to… gasp… triple digits!

No explanation really needed here; Jeter won five World Series with the team and served as captain for 12 years. The dude is a Yankees legend, end of story. It’s only a matter of time before the Yankees officially retire his number in another over the top ceremony (which, he honestly probably deserves).

Current skipper Joe Girardi was the Yankees’ catcher from 1996 to 1999 and was crowned a World Series champion for three of those four years. In 2008, the Yankees hired Girardi on a lucrative contract to become the team’s manager. He promptly won the 2009 World Series, the Yankees’ most recent. The question of his getting a number in Monument Park is probably less relevant than the question of which number he’ll retire; Girardi wore 25 during his playing days, 27 as a manager in 2009, and 28 from 2010 until now.

As much as people hate on A-Rod, he has been a core member of the Bronx Bombers ever since he came over in a 2003 trade from the Texas Rangers. He won two MVP awards for the Yankees and was pivotal in their 2009 World Series championship. With almost 700 career home-runs and 14 All-Star Game appearances, Rodriguez’s stats are those of a future Hall of Famer. The only potential pitfall on A-Rod’s resume is his history of Performance Enhancing Drug use. However, the Yankees’ retirement of Andy Pettitte, another admitted PED user, is a good sign for A-Rod. I believe he’ll get in.

Too Early to Tell, But Possible:

The Yankees signed Tanaka from the Japanese league last year, and he has impressed in his one and a half seasons in pinstripes. At 26 years old, Tanaka will be the team’s ace for the future if he can avoid injury. Whether or not he’ll be good enough to retire #19 remains to be seen.

A former starter in the Yankees’ farm system, Betances moved to the bullpen two years ago and has been overpowering. He has an ERA under 2.00 in over 170 career innings pitched, and seems to be the team’s future closer. If he can keep up this level of production, Betances could turn out to be a modern Mariano Rivera.

Gregorius was traded to the Yanks this summer and looks like the heir to Derek Jeter at shortstop for at least the near future. Only 25 years old, Gregorius is young, promising, and has the opportunity to spend the next decade as the Yankees’ starting shortstop. If he can be productive in the field and continue to improve at the plate, don’t rule it out.

Severino has only made six MLB starts so far, but he already looks like a stud. He was the top prospect in the team’s farm system and is only 22 years old, leaving tons of time to improve on his already dominant arsenal of pitches.

Now… how long until triple digits make an appearance on pinstripes? In 1939, Lou Gehrig’s #4 was the first Yankee number officially put out of commission. They have retired 21 numbers in 76 years since, which is equivalent to approximately one number every 3.6 years. They are not able to field a full active roster of 25 players after 55 more number retirements (I am including 0 and 00 as number options; MLB players are indeed allowed to wear them). If the Yankees administration continues retiring numbers at the same rate they have for the last 76 years…in 199 years, the New York Yankees will have retired so many numbers that they won’t be able to field a full roster of 25 players without resorting to triple digits. Whether or not baseball will even exist in year 2214 is probably the more relevant argument; but I anxiously await the day triple digits come to sports.