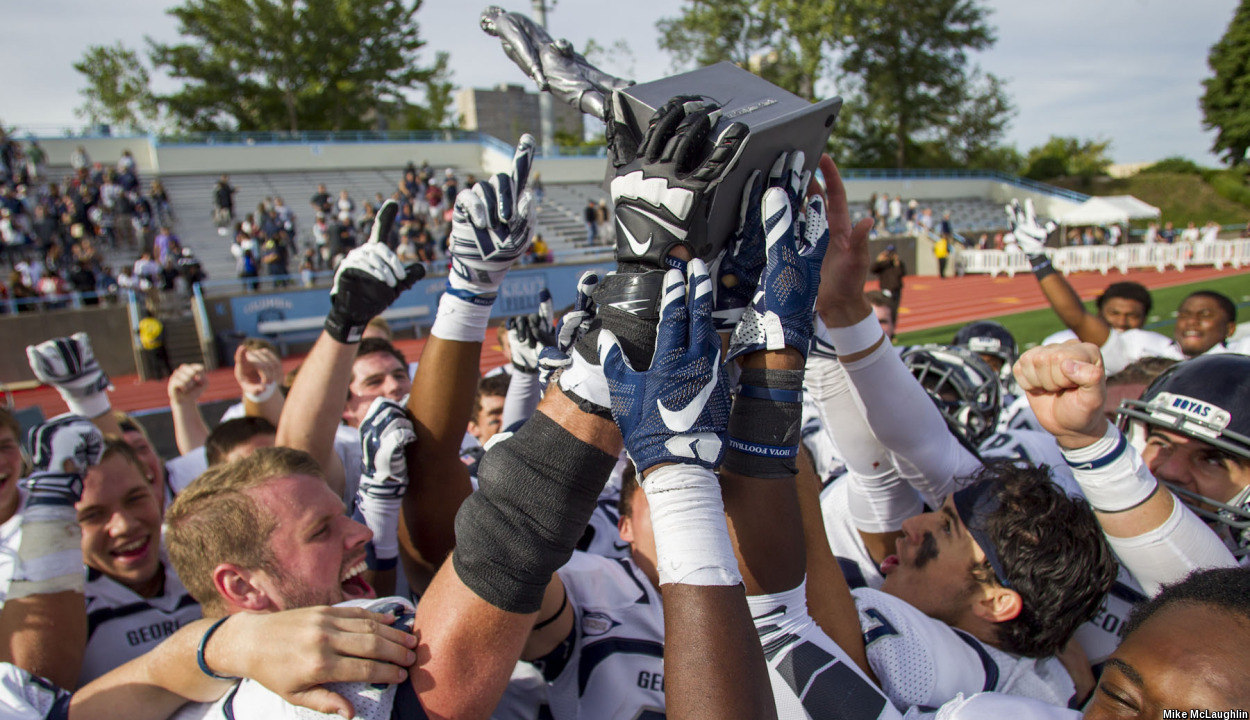 The Georgetown football team (2-2, Patriot League) returned to .500 this past Saturday in New York,  as they defeated Columbia (0-2, Ivy League) 24-16. Led by the strong play of senior quarterback Kyle Nolan, the Hoyas scored 17 second quarter points en route to the victory.

The Hoyas were able to stay away from the turnover issues that had plagued them in their game against Dartmouth last week. After throwing two interceptions last week and fumbling just before running for a touchdown, Nolan threw for two touchdowns and rushed for a score as well. Nolan was also the leading rusher on the day with 41 yards gained on the ground. For his terrific display, Nolan earned the honor of Patriot League Offensive Player of the Week.

“We executed well on offense,” said Nolan of his success this week. “I got the ball in the playmaker’s hands and guys like Justin Hill and Jake DiCicco made the plays.”

Junior wide receiver Justin Hill was the preferred target this week, as he starred in the game with two touchdowns and a career high 118 yards on the day. Most of the yardage came on a single play in the third quarter when he broke for an 80-yard touchdown. Senior wide receiver Jake DeCicco lead the team in targets with nine for 59 yards.

Coach Rob Sglarta was also impressed by the play of his receivers, especially Hill.

“Justin has the ability to take the ball up to the house on any play,” said Sgarlata. “A lot of people don’t know he missed the majority of the preseason with an injury and he’s just starting to his his stride now.”

Sglarta had high praise for Columbia as well.

“They’re a good football team,” said Sgarlata. “Some people think they will not win a lot of football games. But they’ll win games this year…It didn’t surprise me we were in a dogfight during the game.”

Saturday’s win also marked the first in the 10-year series between Georgetown and Columbia. The two teams will battle every year for the next decade in hope of holding on to the Lou Little trophy, named in honor of a former Columbia and Georgetown football coach. Little coached the Hoyas from 1924-1929 and is a member of the College Football Hall of Fame.

“It means a lot. Historically here football has been really a big part of the Hilltop,” said Sgarlata. “Before our home games we go up to Copley Lawn and do our basically our run through, we call it Hoya Walk on the lawn, just to pay tribute to the fact that we started all the way back in 1883…It’s really a connection between our kids and our alums.”

The team is already looking forward to their game this Friday at Harvard (2-0 Ivy League). The Hoyas are looking to translate some of the success from last week to this upcoming game. Sgarlata knows his team has the talent, they just have to not make crucial mistakes.

“Being able to finish the game and put some of those opportunities together, I think that is a big deal for the development of this football team this year.”

The Hoyas and Crimson will face off this Friday night at 7:00 p.m. The game will be televised on ESPN3.