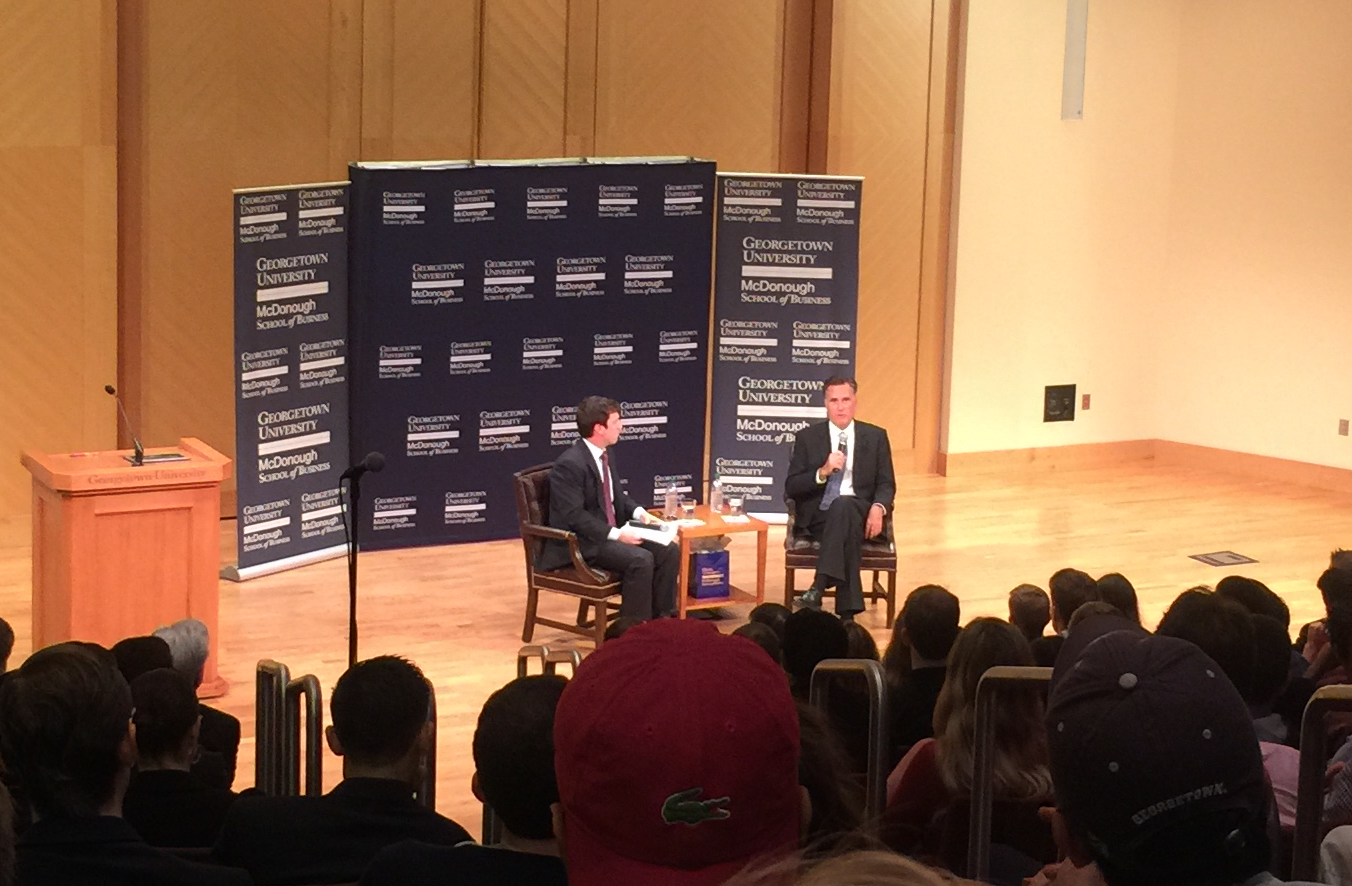 On Sept. 30, former governor of Massachusetts Mitt Romney opened a dialogue in Lohrfink Auditorium with Georgetown students in the form of question and answer, addressing student-led issues such as business leadership, current foreign policies, and the 2016 presidential campaign.

A Georgetown MBA student initiated the conversation by citing MSNBC’s recent poll, which stated that 62 percent of the American people still believe that the country is on the wrong track. In response, Romney raised several concerns regarding our nation’s foreign policies, education, economy, and income inequality.

“From a foreign policy standpoint, this has been a very bad seven years. You may love him or hate him, but our president has been a disaster,” said Romney. “Whether you look at Ukraine or the South China Sea or North Korea or Libya or Israel or Syria, just look around the world, there’s almost no theatre in the world where our interests and human rights and democratic ideals have been elevated by the policies of the president.”

Romney characterized Syria as an opportunity as well as a risk. According to Romney, Syria would be a great resource as Iran’s ally and pathway to the Mediterranean with Assad removed. He also agreed to Democratic presidential candidate Hillary Clinton’s stance that the future administration needs to coalesce the insurgent forces in Syria and remove Assad who terrorizes his own people, as shown by the migration crisis in Europe.

Moreover, the former governor commented on Russia’s supplying arms to Syria leading to an airstrike on Wednesday. “They say they’re going after ISIS. My guess is they’re also going after the insurgents,” said Romney. He suggested that the U.S. administration set aside Assad for the moment and focus on eliminating ISIS, then later address the Syrian leader.

One student directed the conversation to the 2016 presidential campaign and leading Republican candidate, Donald Trump. Romney categorized Trump with Ted Cruz as an insurgent type of Republican leader.

“Frankly if you light your head on fire, you make the evening news,” said Romney, which was followed by an applause. “I think what you’re going to find as the process goes on is that Donald Trump won’t be the nominee. Ultimately our nominee will come from the mainstream conservative bracket. I don’t know who that will be.”

While Romney praised Trump’s intentions in bringing light to certain issues such as immigration, he found Trump’s insensitive comments about other candidates unfortunate.

“Our nominee will be successful if we go not only go the majority population but also to the minority populations and point out that what we believe is designed to increase real wages, real take-home pay, and get people out of poverty.”

“There are a number of priorities: Make sure America is a land of opportunities … eliminate generational poverty … and make the world safer, return America as a leader of the world.”