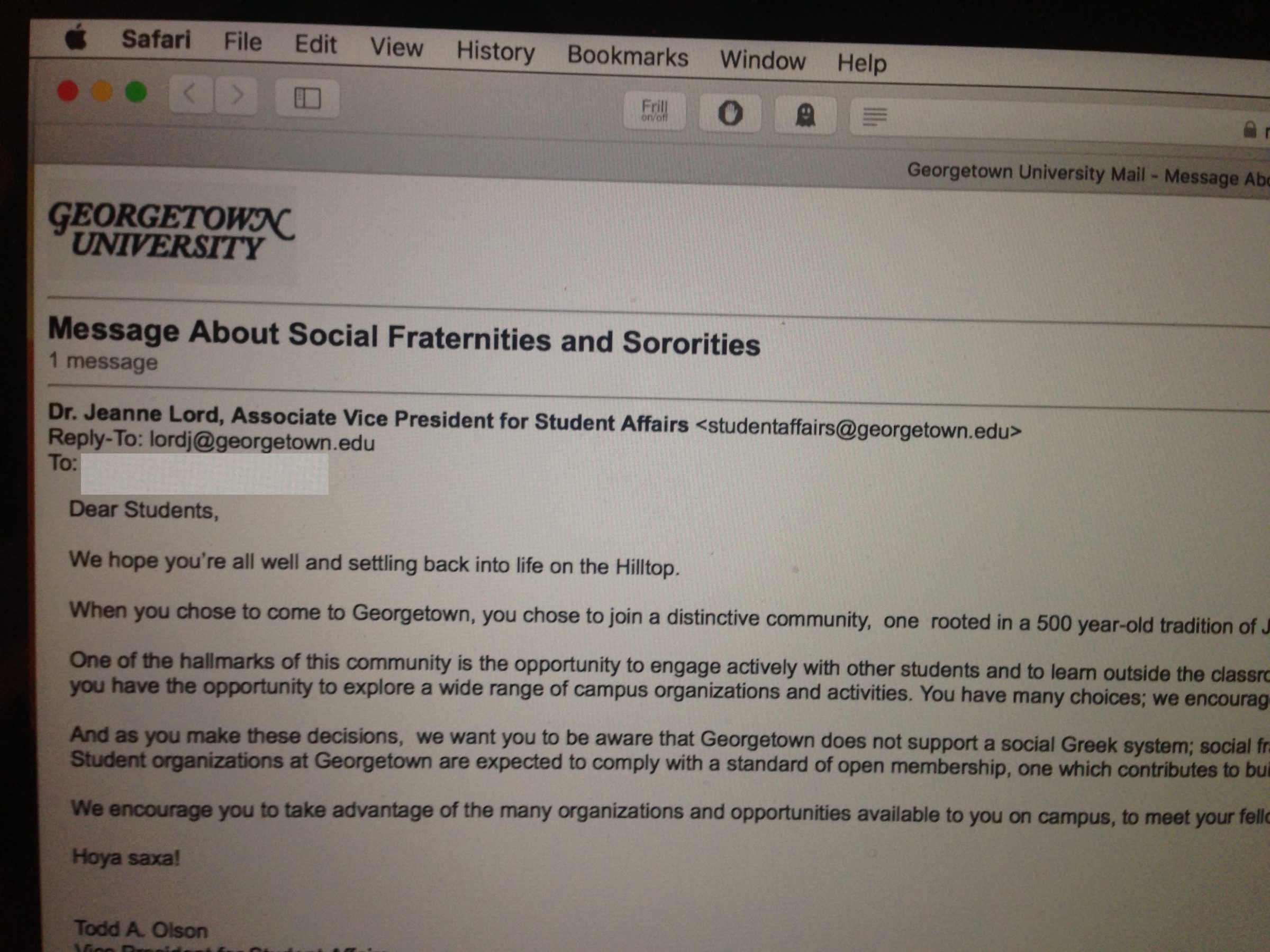 Additionally, President of Delta Phi Epsilon (DPE) Molly Wartenberg (SFS ‘16) said that she and other Orientation Advisers (OA) received an email “saying not to advocate for Greek life as an OA” during New Student Orientation (NSO) this year.

In this email sent on Aug. 5, the 2015 NSO Coordinators wrote that Greek organizations may not take part in university sanctioned activities or programs. This includes OAs using their roles as mentors “to influence students to participate in rush or recruitment.” It also indicates that any violation of the listed policies is a violation of the Student Code of Conduct.

In the campus wide email, Olson and Lord encouraged students to participate in and explore the diverse mix of co-curricular activities offered but steered students away from unrecognized fraternities and sororities.

“As you make these decisions, we want you to be aware that Georgetown does not support a social Greek system; social fraternities and sororities are not eligible for access to University benefits and do not have University oversight,” Olson and Lord wrote.

[pullquote]I really like social fraternities because, in reality, they are a lot more open-minded and inclusive than a lot of the Georgetown recognized clubs on campus.
—Daniel Bergelson (MSB ‘19), a pledge for AEPi[/pullquote]

Olson and Lord continued, “Student organizations at Georgetown are expected to comply with a standard of open membership, one which contributes to building the inclusive and welcoming student community at the heart of the Georgetown experience.”

In an email to the Voice, Olson noted that the email this year was the first time that the Division of Student Affairs sent such a strong message. “We were motivated to insure that our students are aware of the university’s views and position,” he wrote.

Some members of Greek organizations, however, expressed discontent about the email.

“It’s frustrating to [DPE] because … freshmen were getting this [Sept. 18] email and possibly thinking that we are this horrible organization because this is what the school is portraying,” Wartenberg said.

According to Chris Tiede (COL ’16), President of Sigma Phi Epsilon (SigEp), SigEp’s executive board members received an email explaining the fraternity’s functions and abilities as an unrecognized group on campus. Tiede described this email sent during NSO as “a little bit threatening” compared to the campus wide email from Olson and Lord.

Georgetown’s concerns about social sororities and fraternities, according to the comments Olson wrote to the Voice, “center on their exclusive membership practices, the prevalence of hazing in these groups nationally, and a concern that the growth of these groups will erode the very distinctive student culture that has long been a hallmark of Georgetown.”

In the recent year, hazing has become a major concern for Greek life. The week of Sept. 21 was National Hazing Prevention Week, during which a Hoyas Against Hazing table was stationed in Red Square. There, students could find stickers, buttons, and fliers for Thursday night’s documentary screening of “Haze.” This coincided with both the rush process and many other student organizations’ initiation processes throughout the week.

In regards to Hazing Prevention Week, Olson wrote in an email to the Voice, “We are committed to educating students actively about the risks and dangers of hazing, and this week’s programming is an example of that work.” 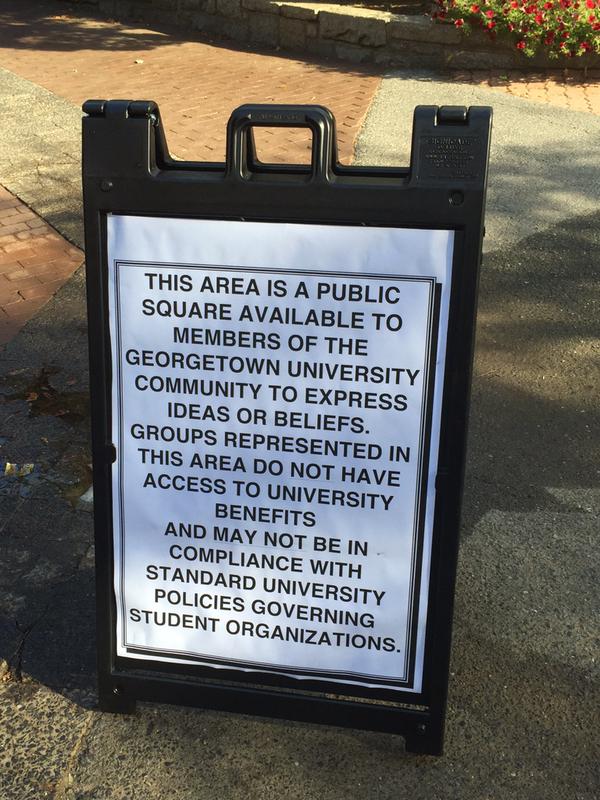 Greek organizations and other unregistered clubs have been allowed to table at Red Square during the Council of Advisory Boards fair in the past. This year, the university put the above sign delineating their unofficial and unsupported existence. File photo: Georgetown Voice

“Hazing is not only an individual issue, but a cultural concern that subverts the University’s mission and threatens permanent damage to the educational experience, careers, and well-being of students,” reads a statement on the Hoyas Against Hazing website.

However, according to Alpha Epsilon Pi (AEPi) President Jacob Bercow (COL ‘16) and DPE Public Relations Representative Jenna Galper (COL ‘17), SAE, SigEp, and DPE have eliminated hazing from their pledging process, or in DPE’s case, “Delta” process. Wartenberg, Galper, Tiede, and Bercow all mentioned that they do not believe that hazing is limited to Greek organizations. “It’s kind of ludicrous to think that Greek organizations are an exception,” said Bercow.

The Student Organizations Standards provides guidelines for student organizations on campus. Organizations “conducted secretly or as a fraternity or sorority (e.g. groups with discriminatory, secret or ritualized membership practices)” are not in compliance with university policy.

Some students associated with Greek organizations, though, suggest that fraternities and sororities are quite inclusive. Tyler Welsh (COL ’18), a member of Zeta Psi, said that he “[finds] it ridiculous that [the university] addresses Greek organizations as the ones who don’t abide by Jesuit values of inclusiveness, and you have things like the Corp and Blue and Gray, which reject way more kids.”

According to Tiede, this semester, SigEp accepted 18 of its 74 applicants. “The idea that fraternities and sororities are exclusive incredibly misunderstands the Georgetown community,” Bercow said.

Daniel Bergelson (MSB ‘19), a pledge for AEPi, said, “I really like social fraternities because, in reality, they are a lot more open-minded and inclusive than a lot of the Georgetown recognized clubs on campus.”

“We understand that social fraternities and sororities provide benefits to their members, and we know that there are students interested in joining these groups,” Olson wrote in an email to the Voice. “We respect our students’ freedom to associate with fraternities and sororities, and just wanted to be clear that we will not be officially recognizing or supporting these groups.”

In terms of Greek life’s future at Georgetown, Tiede said, “It’s not about upsetting the current Georgetown social structure; it’s about finding our niche in it and existing there. I think that’s something the university, maybe, doesn’t understand.” 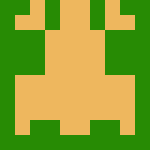