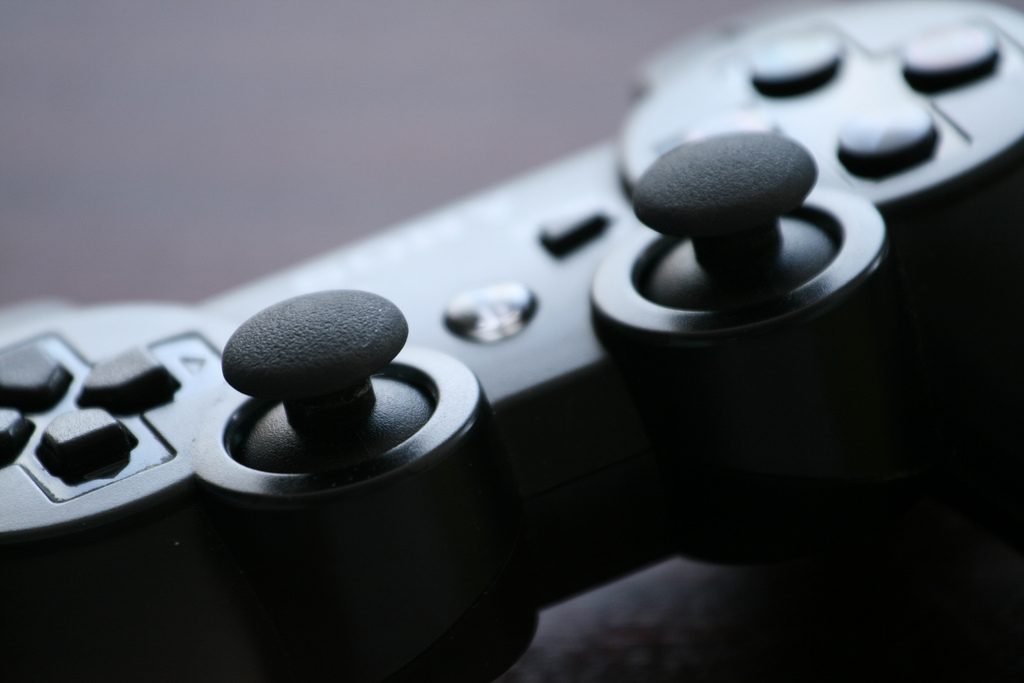 Structuring Creativity: an examination of the simulation game

On October 7th, Fortune.com released a report explaining why virtual reality is about to majorly hit mainstream markets. Future plans for virtual reality headsets range from users playing around in 3D videogame spaces, to—yes, this sounds crazy—streaming the democratic presidential debates. The virtual reality craze has been on the upswing in the past year, most notably when Facebook bought the VR company Oculus in 2014. The concept of virtual reality, though, is a longstanding evolution out of the video game genre, specifically the genre of simulation games.

But why bring this up in leisure blogging? Video games are an evolved form of leisure; we can think of videogames as the natural evolution of an entertainment and artistic activity, one that began with literature, moved to radio, movies, and television, and ended up in the tech world where we are now: the world of computers, iPhone apps, and video-game consoles. Simulation games in particular give us agency and allow us to be the creators of our own works of art—ranging from malls, to zoos, to theme-parks, to households of pizza-craving Sims—within a given framework. While technology moves into the newest form of immersion, the virtual reality machine, it is important to reflect on the nature of gaming as an experience, to see what we can see what benefits arise from the relationship between player and playspace.

A genre of game that occupied much of my childhood was the third-person sim game. Roller Coaster Tycoon 2, The Sims (1, 2, and 3), SimCity 2000, and my dad’s favorite, Age of Empires (which could be simultaneously categorized as a strategy game), all fall under this category, and they took up hours of my time with their immense depth and player-influenced storylines. The sim game creates a perfect balance of structure and liberty; it operates on a player’s  initially-imposed boundaries that the player then can surpass, all within the game’s intended structure. While some sim games may come across as open-worlds, they are in many ways contained creative spaces, spaces where designated rules are meant to be broken within a safe, player-driven arena.

The genre of the sim game (sim standing for simulation) is largely attributed to Will Wright, the creator of the gamer-world-famous SimCity. Wright began his career as a simulation game builder in the 80s, when he developed a level editor for his first game, Raid on Bungeling Bay. This level editor served as the basis for the simulation game that would become SimCity, the classic—and perhaps most famous—simulation game, released in 1989-1990. Wright is perhaps most well-known for the games out of his company, Maxis, which was bought by EA in the late 90s. EA is behind countless games, including the quintessential simulation game, The Sims. Other famous games include, of course, SimCity, and Spore. Either way, Wright pioneered the simulation game genre, one that is still alive and kicking to this day, in part due to the massive amount of creativity the game design allows.

A screenshot from the original 1989 SimCity game. Source: oldfreegames.net

Simulation games, by their name and nature, are meant to look and behave like real-life situations; while the playing space of SimCity mimics the ins-and-outs of city planning and function (even to the level of taxing city residents), that of Zoo Tycoon mimics the construction of a real-world space. Other sim games, like Age of Empires, draw upon concrete historical contexts for their structure and systems.

When the player engages with a simulation game, she inadvertently recognizes the context of the game, and aligns it to her own lived experiences. She finds what is familiar and impresses it on the gaming space. This can explain why, as a child, I would make Sims versions of my family and friends, or make a Zoo Tycoon zoo with a food court much like the ones I saw in San Francisco. I used my preconceived schemas from the real life I had lived to construct a virtual one, given the tools of the game. These schemas determine an implied set of rules with which a gamer enters the simulation space; these rules can be supplemented with explicit objectives and motives provided by the game, in the form of either game manuals, in-game tutorials, or built in, observational learning.

In looking at video games, it can be helpful to define a few terms, courtesy of gaming scholar Alexander R. Galloway and his collection of essays, Gaming: Essays on Algorithmic Culture, published in 2006. Two of Galloway’s terms are most important when talking about game structure: diegetic and nondiegetic. A diegetic act is one that occurs in the time of the game— for example, a Sim walking to the kitchen in normal time. A nondiegetic act, then, is one that takes place outside of the game time. An example of this in a simulation game is inputting a cheat code (Control+Shift+4 to make boatloads of cash on pause in Zoo Tycoon) or switching from build to buy mode in The Sims (which freezes the game time, but allows the player to place furniture or build walls). 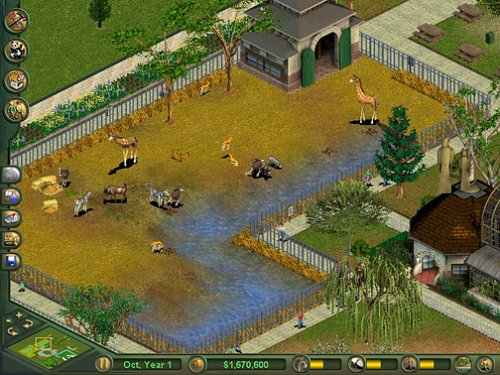 A screenshot from the zoo-building sim Zoo Tycoon. Source: Amazon.com

What makes simulation games so creative is the break allowed to the gamer from gamer-perceived limitations observed upon entering a mimicked space. While the game may voice certain objectives (in Zoo Tycoon, for instance, you are told to generate revenue from a successful zoo with a given income) to the player upon arrival, it simultaneously allows for deviant behavior as a kind of in-game entertainment. So, when the player performs a nondiegetic act by entering a cheat code (rosebud, anyone?) to give their Sim more money than the in-game (diegetic) act of getting their sim a job, they feel a creative agency for stepping outside of the perceived boundaries of a situation. But the developers structure the game as such, so that players can experience this agency as part of the game. By discovering acts outside of the regular boundaries of experience that simulation games mimic, the games open up new, imaginative spaces for the player.

These “imaginative breaks” can happen in both diegetic and nondiegetic forms, both of which are contained within the game’s boundaries: a circumscribed, player-driven space. The reason that simulation games are best suited to this form of creativity is that they allow for so many deviations in a perceived “open world” environment. Imaginative breaks include prescribed ways of playing that are redefined by the gamer, nondiegetic methods of playing, and anomalies built into the diegetic space of the game.

[pullquote]By discovering acts outside of the regular boundaries of experience that simulation games mimic, the games open up new, imaginative spaces for the player.[/pullquote]

A great example of a player using a prescribed feature in a rule-breaking manner is the use of fences and bulldozing in Zoo Tycoon. Some of my fondest memories from Zoo Tycoon—I wonder what this says about me as a person—were bulldozing the fences of my bengal tiger exhibit, to watch my densely-populated zoo slowly turn into a wildcat-dominated wasteland. This imagining of a post-apocalyptic tiger world was creative and fun in my middle-school eyes. It happened due to the use of a built-in game feature (the bulldozer) in a way that is not intended in the explicit designing of a zoo, but was implicitly allowed by the game’s structure.

Cheat codes are the most widespread example of a nondiegetic system of creativity in simulation games. Cheat codes are “behind-the-scenes” programs built in by software programmers that allow for augmentation of the gaming experience. A few have already been mentioned here: the “rosebud” cheat in The Sims that adds 1,000 Simoleons (Sim monies) to your household worth, and holding down the control, shift, and 4 keys in Zoo Tycoon to increase your zoo’s funds in a heartbeat.

The “rosebud” cheat in The Sims gives your sim household an additional 1,000 simoleons. Source: amplab.ca

Here is where the divide in how to play simulation games comes in: some “simulation purists” argue against the use of cheat codes because it ruins or diminishes the gaming experience. Others see cheat codes as ways of opening up new possibilities of play, and I would agree with this view. Cheat codes expand players’ creative reaches, allowing them to build bigger and better than before. While in some cases this may simplify the game, in others it opens up new possibilities. The argument becomes whether the most creativity can be found in the challenge of limited resources or in the freedom of abundant choice; perhaps both are equally creative approaches.

Selecting a cheat can be thought of as choosing a critical lens through which to read a story, or picking up a certain utensil when creating a work of art; they serve as ways for players to further alter their experiences.

Anachronistic or anomalistic features allow the simulation to deviate from real-life mimicry to bolster the gamer’s creative space. In Zoo Tycoon, for instance, the gamer can buy an expansion pack that features dinosaurs (a-la Jurassic World) and marine mammals. When the gamer places a mermaid statue inside a tank, the statue turns into a mermaid that the player can treat as a feature of the exhibit. These additions add a whole new imaginative dimension to the game that surpasses real-life expectations. In SimCity 4, the gamer can make a massive robot attack the city, and in the original The Sims, a sim can create a potion that turns him into Frankenstein’s Monster. In these instances, the simulation game moves to a sort of magical realism realm, expanding the player’s gaming possibilities. 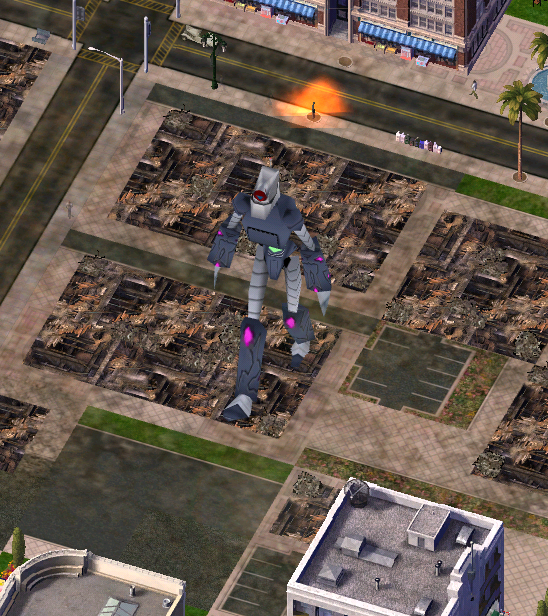 SimCity 4 has built-in anomalies, like this giant robot that will destroy cities. Source: simcity.wikia.com

The unique perspective of the player in simulation games blends together with the above-mentioned mechanisms to create the most unique creative sandbox of all the gaming genres. Because of a third-person omniscient point of view that the gamer experiences, he or she attains a “god-like” status, with full control over all elements in the simulation space. SimCity 4 acknowledges this player-deity entity in part, calling one of its building modes “God Mode” in which a player can terraform the landscape and perform other world-altering actions. I would argue that God Mode extends to all modes of play where the player has external control of the characters, objects, and other elements in a simulation.

Simulation games give players the perfect amount of structure to both work within and break out of completely. Simulation games are the “virtual sandbox” of our modern world. When you slip out of structure—whether it’s intended or not— you give yourself space for a more creative, and perhaps more immersive, gaming experience. Boundaries, even virtual ones, are meant to be broken.