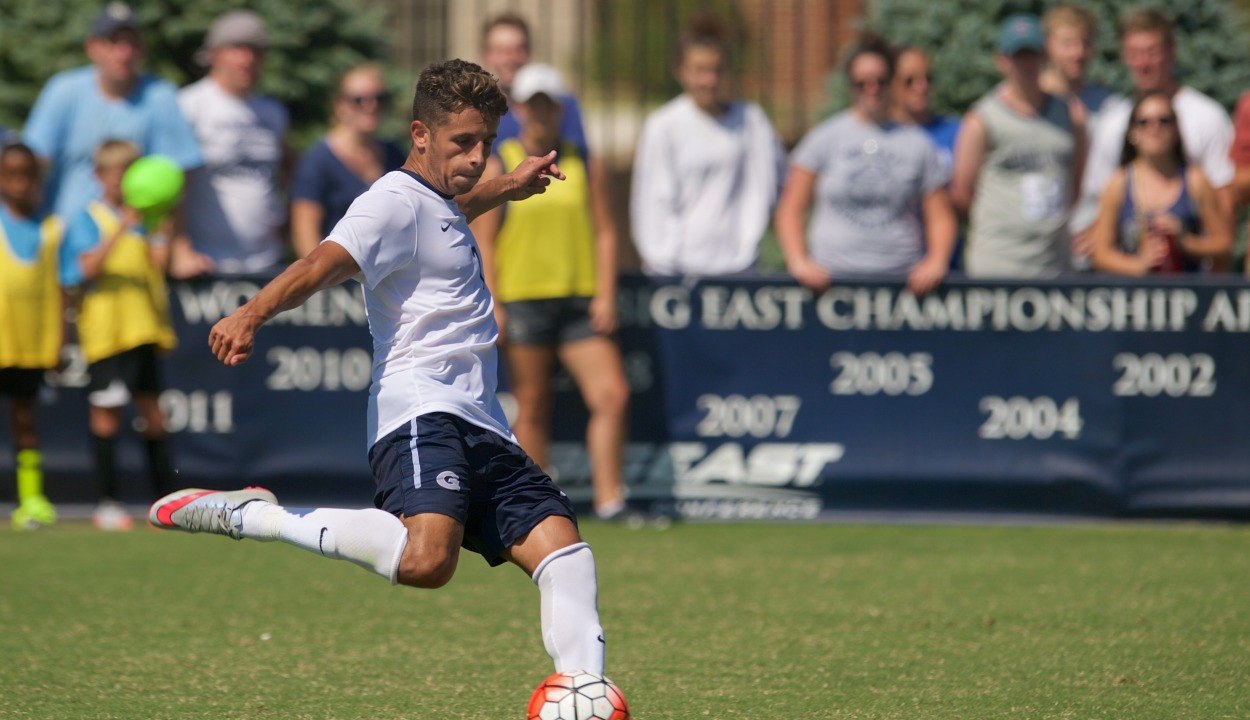 The Georgetown men’s soccer team (8-2-2, 4-0-0 Big East) stayed perfect in conference play by shutting out the Marquette Golden Eagles (5-5-2, 1-2-1 Big East) 3-0 on Wednesday afternoon at Shaw Field. The win was the fourth straight shutout for the No. 10/7 Hoyas, who are undefeated in their last nine games, going an impressive 8-0-1 in that stretch.

For the first half of play, the two teams were even, with the Hoyas staying patient against a Marquette team that seemed content to play deep. By the end of the first half, the Hoysa began seeing more chances, including a great shot off of a corner kick in the 39th minute. In spite of this, the Hoyas and the Golden Eagles went into halftime tied 0-0. This would quickly turn around when sophomore midfielder Arun Basuljevic scored in the 47th minute off of a corner kick.

“The first goal is all you need. If you can get that first goal, the whole game changes,” said head coach Brian Wiese. The Hoyas certainly seemed to use the momentum from this goal by tacking on two more throughout the half.

Senior forward Brandon Allen scored from close range in the 60th minute and senior forward Melvin Snoh finished off the scoring with the last goal in the 70th minute. The offensive performance for the Hoyas was impressive with three different scorers, 21 total shots, and nine corner kicks. Coach Wiese stressed the team nature of the win.

“There were a lot of good performances,” said Wiese. “I thought Brandon Allen was good… I thought Josh Turnley maybe had one of his best games… I don’t think you can single out anybody, I just thought it was a really good team performance.”

“The back four has been good… but, to the credit of the whole team, everyone has been working really hard to keep the shutouts.

The defense certainly did play well, holding the Golden Eagles to only 5 shots, and leaving a pretty easy game for freshman goalkeeper JT Marcinkowski who had 2 saves.

“I think [Marcinkowski] is settling in,” said Wiese. “I think the relationship between him and the back four is really, really good right now.”

The Hoyas, undefeated in the conference, still have five regular season Big East games to play, including a tough match against DePaul (3-10-0, 2-2-0 Big East) on the road and their final match against  No. 1 and undefeated Creighton (13-0-0, 4-0-0 Big East). The Hoyas will need to stay focused in the weeks ahead, as every game is crucial. Yaro and his teammates are confident.

“Yeah. We are. Our conference is a pretty tricky one. You can pick up points against really good teams and lose ones you think you should win,” said Yaro. “This year we’re going to enter every game with the same attitude, the same mentality, because every team we play is going to be different and good in its own way.”

Wiese also seemed confident for the rest of the year.

“I think the guys are in good form. We talked about perfection. can we be perfect in the league, and… you’re four games in and you haven’t conceded a goal and you’re 4-0, and you can maybe make the most out of that if they keep rolling up their sleeves and working.”

He also made a point not to minimize the Hoyas’ next opponent: DePaul, who they

“Tough one at DePaul, on the road,” Wiese said. “I think their record’s really deceiving for how good they are.”

The Hoyas and Blue Demons meet this Saturday afternoon. Kickoff is slated for 2:00 p.m.