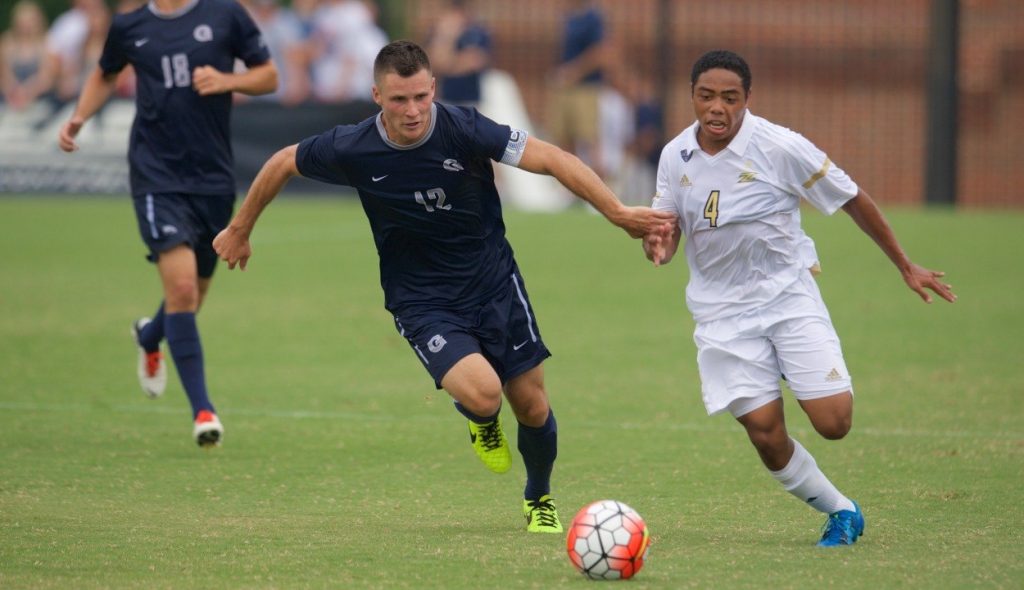 The No. 10/7 Georgetown men’s soccer team (9-2-2, 5-0-0 Big East) defeated the DePaul Blue Demons (3-11-0, 2-3-0 Big East) on the road in Chicago on Saturday afternoon.  The game sealing goal came from Georgetown sophomore midfielder Arun Basuljevic in the 75th minute of play, coming off of an assists from Georgetown junior forward Alex Muyl.

The Hoyas were dominant throughout the game, especially on the offensive end.  In the first half, Muyl was particularly dangerous, forcing DePaul goalkeeper Mack Robinson to save two critical shots in the 18th and 25th minutes, respectively.

Shortly after, Muyl and Georgetown senior forward Brandon Allen both fired shots that were blocked by the Blue Demon defense. But despite generating ten first half shots, the score was locked at 0-0 at the intermission.

Even though his team hadn’t found the net, Georgetown Head Coach Brian Wiese remained confident.  “We played pretty well and at halftime we didn’t have a lot to tell the guys except to continue doing what they were doing and not get frustrated.”

The offense remained in attack mode during the second period, earning eight corner kicks and 13 shots.  In the 58th minute, Georgetown junior midfielder Bakie Goodman sent a header towards the goal, but it was saved by Robinson.

Finally, in the 75th minute, the breakthrough occurred.  Georgetown senior defender Josh Turnley sent a ball into the box, where it bounced around in front of the net.  Following a touch by Muyl, Arun Basuljevic was able to score from the right side.

“It was great for Arun to score because he generated a lot of good chances and just hadn’t finished so it was good to see him stay with it,” remarked Wiese.

The Blue Demons desperately searched for a goal to tie the game, but the Georgetown attack continued to mount pressure, making it difficult for DePaul to generate any real scoring opportunities.  Georgetown freshman goalkeeper JT Marcinkowski was forced to make just two saves during the game.

The win extends the Georgetown unbeaten streak to ten, including seven straight victories.  The Hoyas have also yet to allow a goal in Big East play, shutting out their last five opponents.