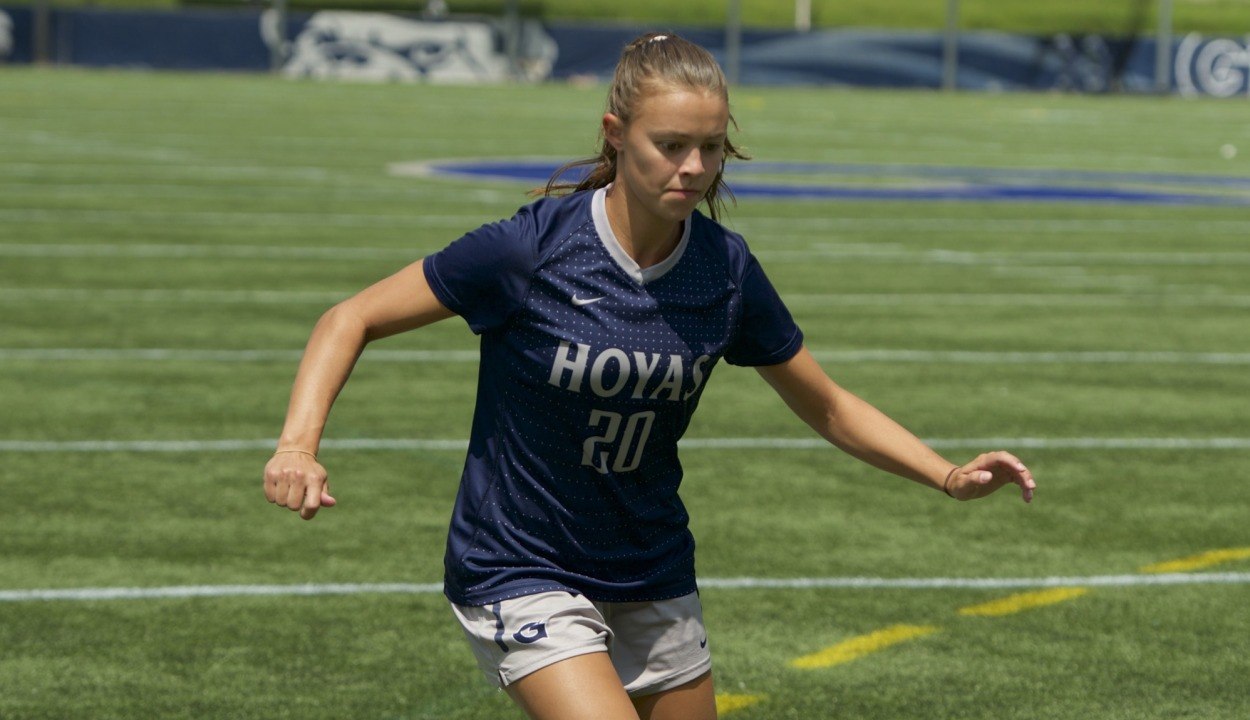 The Georgetown women’s soccer team (10-5-1, 5-1-1 Big East) clinched an appearance at the Big East tournament Thursday, when they dominated the Seton Hall Pirates (2-12-2, 1-6-0 Big East) 4-0. Led by a hat trick from graduate student forward Melissa Downey, the Hoyas now sit at second in Big East standings, in a tournament where the top two seeded teams get a bye.

Georgetown went on to dominate the Pirates in the second half, with Downey scoring again in the 59th and 66th minutes. Junior forward Grace Damaska netted the fourth and final goal for the Hoyas in the 68th minute. Sophomore midfielder Rachel Corboz had the assist, her team-leading eight of the season. The dominant midfielder also leads the team in goals and points, and was named Big East Offensive Player of the Week on Monday.

The standout star of the game, however, was Downey, whose hat trick accounts for all three of her goals this season. The forward got her first start of the year, and certainly did not disappoint.

“They were real goal scorer’s goals,” noted coach Dave Nolan, “She was the first to pounce on to the loose ball in all three occasions.”

Downey, who played at Princeton before coming to Georgetown, had her 2014 season cut short due to injury. Georgetown Head Coach Nolan said that after watching her play in practice this week, he felt this game was a good time to give her the start, a decision that obviously proved to be a good one.

Downey was quick to point out how well her teammates have been playing, especially from Corboz.

“In the last couple games, we’ve been really fortunate to have such consistent delivery from Rachel [Corboz]. She puts it in a dangerous spot, and I was just right there… to tap a couple in.”

With this win, the Hoyas clinched a spot in the Big East tournament and sit at the number two spot in the conference. On Saturday, they face first-place No. 20 Depaul (12-2-3, 6-0-1 Big East) on the road in what is arguably the biggest game of the year thus far for the Hoyas. With a win, the Hoyas would be tied for first place in the conference, which awards first round byes to the top two teams.

“The great thing is, we have our destiny in our own hands, so if we beat DePaul and we beat Creighton, we can be regular season champions, which is what no Georgetown team has ever done outright” said Nolan.

Nolan acknowledged the challenge of playing the defending champions on the road, but reiterated the fact that the Hoyas held their own destiny. Wins against DePaul and Creighton would allow the Hoyas to have sole possession of first place in the event of a tie, since they would have the head- to- head advantage against both viable first-place teams, DePaul and St. John’s.

The Hoyas will travel to Chicago to face DePaul this Sunday at 1:00 p.m. Downey is looking forward to it.

“It’s gonna be an exciting game.”