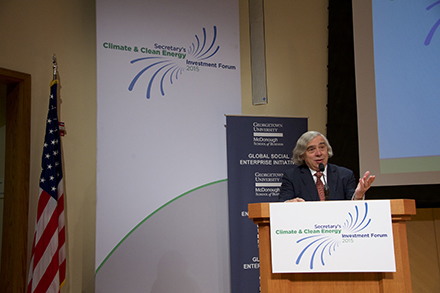 Moniz detailed the Department of Energy’s efforts to spur clean energy and low-carbon investment with the goal of powering the United States’s future following the United Nations climate negotiations in Paris in December.

The administration holds high hopes for a strong outcome at the negotiations, Moniz said. “I think it’s fair to say that the optimism of our accomplishing something substantial is significantly greater than it was a year ago.”

“The challenges do not get easier,” Moniz said. “We will have to keep squeezing down on carbon emissions and greenhouse gas emissions in general, and that’s the time period where in particular—a word that I will try to use a lot today—innovation is going to be absolutely central for meeting not just near term goals … but also the continuing progress that people need to make beyond that.”

Moniz focused his speech on various methods of spurring innovation in the energy field through new business, utility, finance, and technology models. Moniz highlighted the need for patient, high risk investment capital and “the need to open up the innovation pipeline.”

“The timescale involved in the energy business is not the same as in other areas, IT for example,” said Moniz. More innovation at early stages combined with an increase in that patient capital would spur advances.

Moniz also highlighted various Department of Energy projects, such as loan programs and research centers, that seek to further innovation. One of the world’s largest wind farms and some of the first utility scale solar projects arose from such programs, Moniz said.

Furthermore, Moniz made clear that the Department of Energy will take advantage of various low carbon sources and innovations in order to meet the future emissions reduction goals, including nuclear power.

The nuclear business, specifically, will be in an interesting place in the coming decades, according to Moniz. While 2030 is a benchmark year for emissions reductions internationally, that is also the year that many nuclear facilities, which are low-carbon, will have to be retired. These plants, however, are also extremely costly to build. A combination of financing and technological innovation is therefore needed to address this issue.

The example of issues with the future market for nuclear energy highlights the overall theme of the two-day forum: to convene various sectors in order to address issues with clean energy investment.

Moniz spoke during the second day of the event, following President John DeGioia’s discussion with Secretary of State John Kerry the previous day, where he highlighted Georgetown’s role in this discourse on clean energy.

“The great strength of universities is disciplinary knowledge but the great challenges that we face, like climate change, require the integration of those disciplines,” DeGioia said. “What we’ve tried to do with the Georgetown Environment Initiative … was harness the power of the whole institution to look at the integration of policy, law, business, and science and try to make the kinds of contributions that universities can make to this dialogue.”

This forum is the second event the MSB’s Global Social Enterprise Initiative has convened in partnership with the State Department, following the Global Impact Economy Forum in 2012, according to Ladan Manteghi, executive director of GSEI.