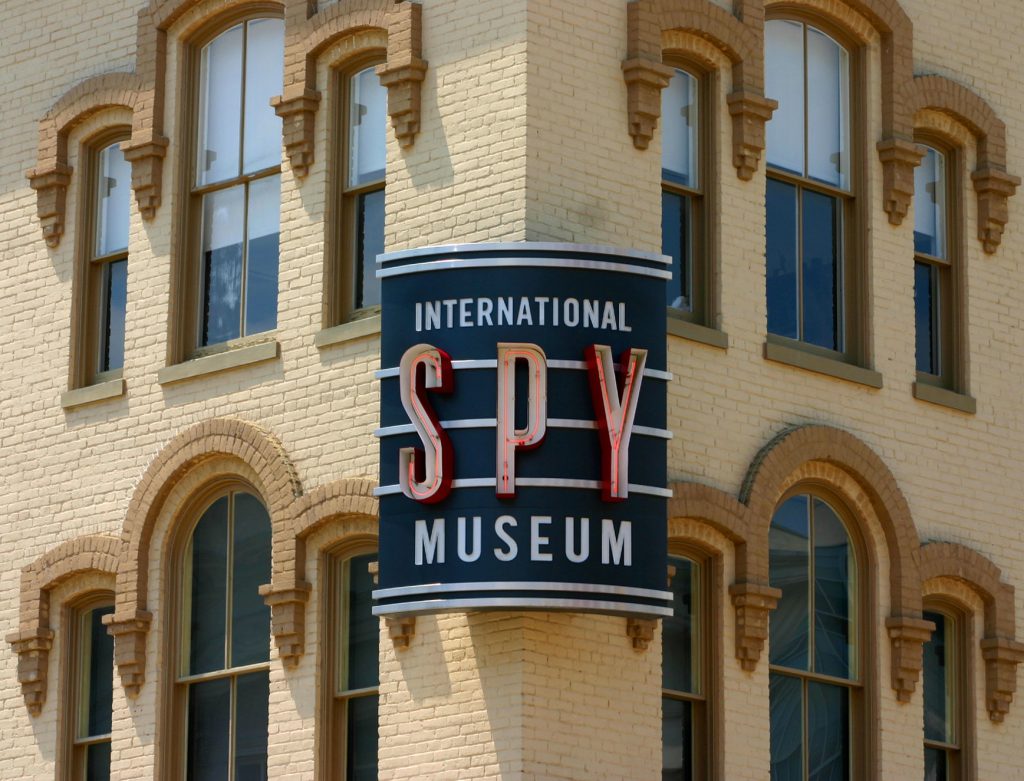 A Day at the International Spy Museum

I have always wanted to be a spy. At the ripe old age of eight, to build my own résumé in the field, I decided to start keeping “spy notes” on my family by detailing their comings and goings: an investigation that held my attention for roughly half an hour. Fast-forward to today, and an attraction right here in DC offers the chance to undertake a more real spy mission. At the International Spy Museum, participants can assume new identities, train for various scenarios, and learn about the history of covert operations.

My companion and I purchased our general admission tickets (for $21.95) and were queued to enter the elevator and begin our mission. Despite having spent the better part of our commute to the museum coming up with spy names and identities, we soon learned the Spy Museum actually chooses for you. The elevator takes you to the third floor, where you have about three minutes to memorize the details of one of several pre-fabricated aliases. At various points in the museum, border control agents on touch screens test you on information such as your name, age, occupation, destination, and reason for visit. I was an enthusiastic participant in this activity, though this part of the experience is totally skippable if the spy life is not for you.

The first part of the museum is a “School for Spies,” acting as a training camp for all aspiring operatives. Various interactive displays teach you how to survey your surroundings, identify compromising scenarios, and wear disguises. It quickly becomes obvious why the museum must queue everyone in the beginning and stagger people’s entrance into the museum: there are relatively few interactive stations that all have very long lines. The rest of the exhibit, which displays various spy artifacts, makes it seem like the curators were mainly concerned with how to fill the space.

The line between scenarios and artifacts related to “real-life” spying versus entertaining displays that played off our romanticized conception of spying seem blurred. There were some real items on loan from the CIA and the KGB, such as umbrellas with canisters in the handle and shoes with a transmitter in the heel, but other items such as a cutaway view of a getaway car seemed fabricated or over-the-top. There were few stories from “real-life” spies, and though I’m sure many missions and experiences are highly classified, I was hoping to learn whether real spying is actually like what we were “training” for. The Trojan Horse was one of the earliest examples of spying and deception. Photo: mrgarethm on Flickr

The remainder of the third floor showcased the history of spying. Starting with ninjas and ancient codes, the exhibit winds its way through the Civil War, World War II, and other historical instances of spying that I had never learned about in textbooks. I found this part of the museum to be the most interesting, as the exhibits took a storytelling approach that made me want to read every display panel.

A James Bond display comprises the entire first floor. From the get-go, we were surrounded by Bond movie paraphernalia, and another guest behind us at the beginning of our visit echoed our thoughts by asking, “is this only a James Bond museum?” The exhibit on the first floor, titled “Exquisitely Evil” and highlighting the Bond villains, further casts the museum  as a showcase of Hollywood stereotypes. Bond superfans would almost definitely find this part of the museum unique, though I walked through it pretty quickly having only recently watched my first Bond movie ever. After making our way through the enormous gift shop selling books, “spy gear,” and disguises, our time in the Spy Museum came to an end.

For the price of the admission ticket, I was a bit disappointed in the museum overall. They have a cool collection of artifacts, history, and of course, James Bond items, but I expected a more interactive experience and more about the realities of spying than what I got on this museum trip.

The 250: The Imitation Game
Activist questions relationship between Nike and Georgetown, discusses labor practices of company