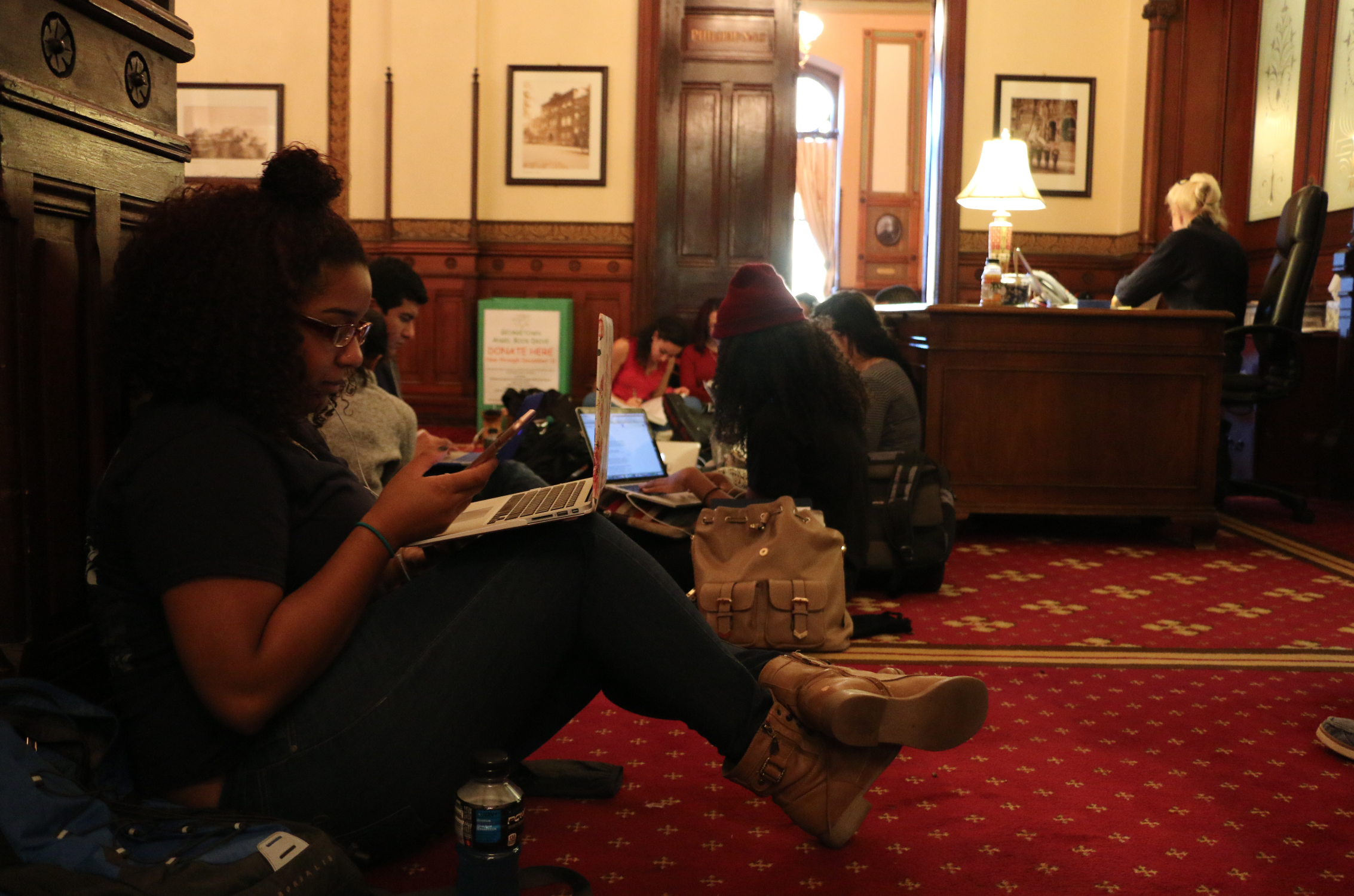 Student organizers of the sit-in at University President John DeGioia’s office, who are calling their movement #BuiltOn272, have released a statement further explaining the impetus for fighting for the name change and their goals for the protest.

“Black individuals have historically been an integral part of the foundation and advancement of Georgetown’s academic Institution with little to no recognition. We are imploring that the University recognize and acknowledge the role that Black people have had and continue to have on this campus,” the group wrote in its statement. “Mulledy Hall should be renamed in deplore, of slavery. Furthermore we are calling for the University to honor these roles, and make these narratives a permanent part of the overall Georgetown narrative.”

Around 3 p.m., Dr. Colman McCarthy, founder and director of the Center for Teaching Peace and an adjunct professor at Georgetown University Law Center spoke to students, urging those at the sit-in to continue their protest and reminding them of the university’s legacy of student activism.

“I fully support the students as I did in 2005 in the hunger strike [for the Just Employment Policy]. This is a different case, but it’s the same issue, and it’s legitimate,” he said in an interview with the Voice.

He also offered the demonstrators several suggestions for renaming the building, including Fathers Berrigan, McSorley, and McKenna S.J., all of whom he cited as examples of Jesuits who worked for social justice. The students, however, have suggested Building 272 as a replacement name for Mulledy Hall, to honor the slaves sold in 1838.

The organizers’ statement also noted that conversations about the building’s name began in August, with an email from President DeGioia’s office that was sent just before the hall’s opening. “When the re-opening of Mulledy was announced in August, minutes before the email was sent out, a list of Black student leaders were invited to speak with the President’s Chief of Staff about the name,” they wrote in the statement. “During that [meeting], Black student leaders discussed the importance of changing the name.”

Just before 9 p.m., Imam Yahya Hendi, Georgetown’s Muslim chaplain, and Tahera Ahmad, the director of Interfaith Engagement at Northwestern University, also spoke with protesters to share their experiences and support. They are the first male and female Muslim chaplains at American universities, respectively.

“We are all in this together- today they get you, tomorrow they get me,” said Hendi.

Ahmad, who made national headlines this fall when American Airlines denied her an unopened can of soda for fear of it being used as a weapon, also voiced her support, after sharing the discrimination and violence she has faced as a Muslim woman, and encouraged the students to maintain their sit-in.

The sit-in comes less than a day after security was heightened at Howard University, an Historically Black College or University (HBCU), due to online threats against students. As reported by NBC Washington, “the threat was posted on the website 4Chan, which allows users to post anonymously. The post spewed racial slurs and threatened to harm anyone still on campus after 10 on Thursday.” Classes continued as scheduled Thursday and Friday, despite the threats.

Throughout Friday, alumni and supporters have donated food for the protesters, who plan to remain in place until midnight. As one administrative staff members left her desk for the day and called out to the students “have a good night,” several responded with “we’ll see you on Monday,” when they plan to continue the sit-in if the name has not been changed.

You are taking it to easy on the university. Give them an ultimatum, either they give in to your demand or you are taking your tuition dollars elsewhere.

“Mulledy Hall should be renamed in deplore, of slavery”?

Someone is badly in need of an editor. I hope proper English doesn’t hurt your feelings or make you feel unsafe.

And you wonder why you have such a pathetic endowment. The once great university will almost certainly slip out of the top 25, and then it will become just another Catholic school.