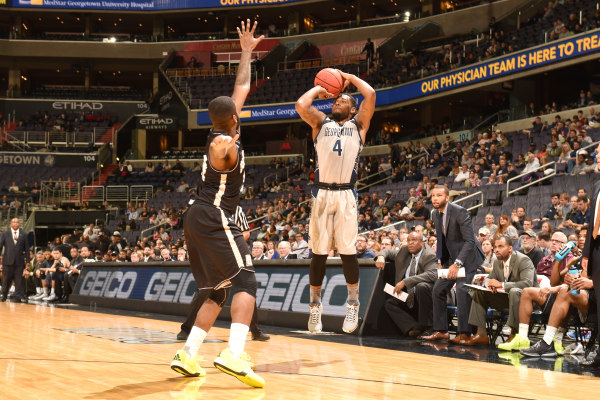 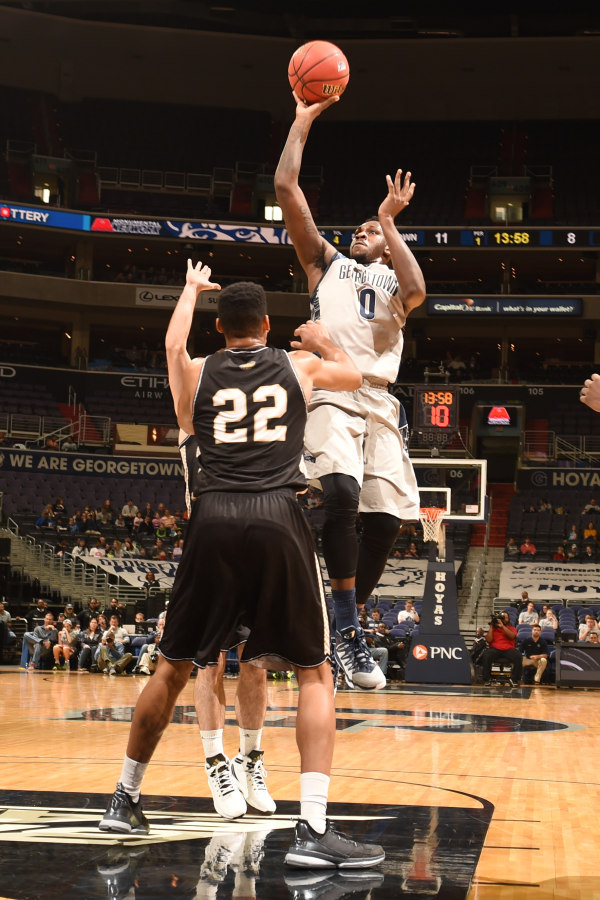 The Georgetown men’s basketball team (2-3, Big East) notched their first home win of the season Saturday afternoon, as they defeated Bryant (2-4, NEC) 77-47 in front of 7,876 fans at Verizon Center.  Sophomore guard L.J. Peak scored a game-high 20 points and freshman forward Marcus Derrickson recorded a double-double (12 points, 12 rebounds) to lead the way for the Hoyas and kickstart their seven-game homestand.

“I think we did a good job of helping each other out there,” said Georgetown Head Coach John Thompson III.  “We made a conscious effort to get the ball in the middle and attack from there. Our guys did a good job of that today.”

Despite leading for much of the first half, the Blue and Gray struggled to pull away from a Bryant team whose quick ball movement and zone defense caused trouble for Georgetown.  After the Hoyas  failed to convert on the offensive end in the opening minutes of the game, Peak stepped up and delivered 13 crucial first half points, including a breakaway dunk which gave the Hoyas a 4-2 lead at the 17:09 mark.

“I just had to pick my teammates up,” said Peak.  “We started out slow and I figured I had to do something to help us out.”

Following the dunk, Georgetown maintained an uneasy single-digit lead, exchanging blows with the visiting Bulldogs for a large portion of the first-half.  The Hoyas eventually found their groove though, as Smith-Rivera and Copeland sparked a 17-5 run to end the period, combining for 10 points in the final 4:38 of the half.  Copeland’s buzzer-beating floater extended the Hoya lead to 14, 40-26, as both teams entered the locker room.

“I think towards the end of the first half, we decided to lock down and really focus on defense and running in transition,” said Copeland.  “That really worked in our favor.” 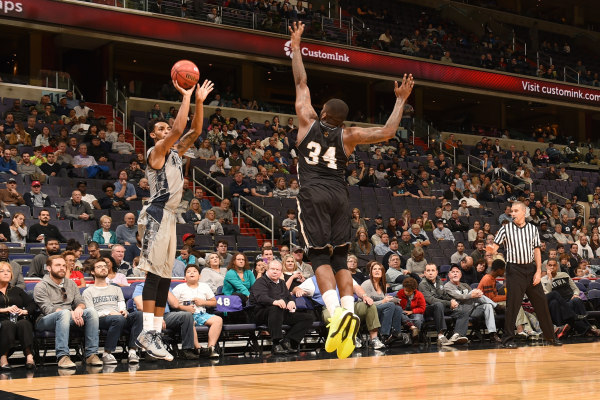 In the second half, Copeland opened the scoring with a quick three-pointer before Georgetown fell into an offensive lull, scoring just four points in the following five minutes.  The Hoyas were able to maintain a double-digit lead due to their defensive play, which shut Bryant down after switching to a 2-3 zone. The closest the Bulldogs got it to was 45-33 with 15:26 to play. The Hoyas led by as many as 31 late in the second half.

Even though the Hoyas held Bryant to 32 percent shooting from the field overall, Thompson was not pleased with his team’s man-to-man defensive effort throughout the game.

“I thought our man to man defense was not good at all,” he said.  “Our zone was fairly effective.”

The play of Marcus Derrickson, who played arguably his best game of the season, was certainly a bright spot in the Hoyas victory.

“He decided to go get the ball today. We need everyone to take that mentality. But I thought he was very good,” said Thompson. “The way he pursued the ball today is something he can do and something we need him to do.”

Georgetown sophomore forward Paul White made his season debut in today’s game after sitting out the team’s first four games with a hip injury.  He recorded two rebounds and one block in ten minutes of action. Thompson was pleased to get him back on the court.

“It’s going to take time, but I thought he was moving pretty well,” noted Thompson.

Georgetown returns to action at Verizon Center this Tuesday night, when they face Maryland-Eastern Shore (1-4, MEAC). Tip-off is set for 7:00 p.m.

For additional news and notes from today’s game, click here. 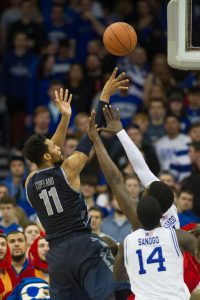 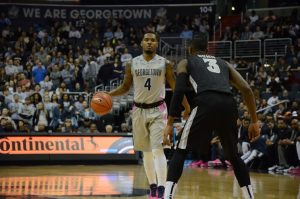 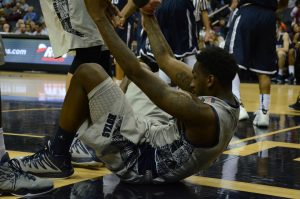