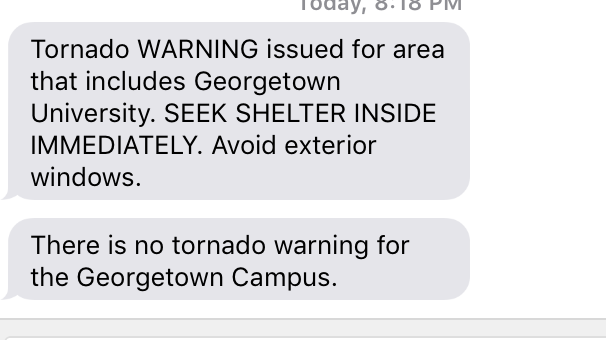 Georgetown’s emergency notification system, HOYAlert, mistakenly announced that a tornado warning was in place “for [an] area that includes Georgetown University,” according to GUPD Chief Jay Gruber. The texts and emails, which were sent at 8:18 p.m., should instead have notified students that Safe Rides have been cancelled for the rest of the night, as phone calls from the system correctly indicated. The mistake was due to “an operator error in a very bad way,” Gruber wrote in an email to the Voice.

At 9:06 p.m., a HOYAlert message announced that “there is no tornado warning for the Georgetown Campus.”

Editor’s Note: This post has been updated to reflect the second alert from the system.