Back to Reality: Hoyas fall to UConn in old Big East reunion 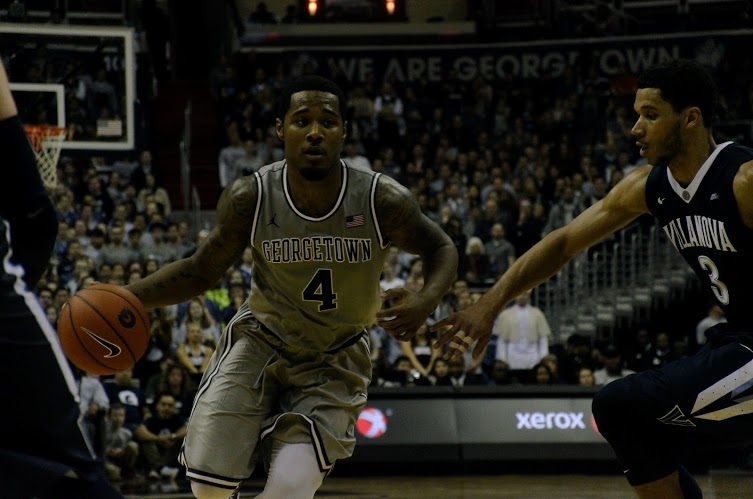 Just when it seemed as though the season was starting to take off, things came to a screeching halt.

The Georgetown men’s basketball team (12-8, 5-2 Big East) fell to the Connecticut Huskies (14-5, 4-2 American) on the road, 68-62, in Saturday’s renewal of a classic college basketball rivalry.  The Hoyas were led by 13 points from junior forward Reggie Cameron, while senior guard D’Vauntes Smith-Rivera and sophomore guard LJ Peak each added 12 points of their own.  Connecticut was paced by a game-high 17 points from redshirt junior guard Rodney Purvis and 16 points from graduate student guard Sterling Gibbs.

In a game that featured four ties and seven lead changes, it was ultimately the final four minutes that decided the outcome.  Georgetown took a 62-60 lead with 4:32 remaining following a jump shot from Smith-Rivera, but it was the last time the Blue and Gray would score in the contest.  Connecticut took advantage of this scoring drought, which spurred a decisive 7-0 Huskie run to close the game.

The Hoyas took the lead early after making a concerted effort to get the ball inside against the much smaller Connecticut frontcourt.  Senior center Bradley Hayes scored four quick points to help give the Hoyas an early 9-4 advantage.  Despite the early success, the Blue and Gray seemingly abandoned this predominantly inside strategy in favor of a more perimeter-oriented attack.  Connecticut gained the upper hand with 13:31 to play in the first period and would not relinquish their lead for the remainder of the half.  At the intermission, the Huskies led 40-33 on 50 percent shooting from both the field and from behind the arc.  In comparison, Georgetown shot 40 percent from the floor, including an abysmal 4-15 from deep.

The Blue and Gray opened the second half on a 9-3 run, which was capped off by a three-pointer from Smith-Rivera.  But each time Georgetown made a run, Connecticut was able to respond with key free-throws.  With 14:22 in the frame, the Hoyas committed their seventh team foul, effectively putting Connecticut in the bonus for the rest of the game.  The Huskies used this to their advantage, as they shot 20-25 from the charity stripe in the second half while Georgetown shot just 2-3.

Midway through the second half, Hayes converted a left-handed hook shot from the block while being fouled.  After he made the ensuing free throw, the Hoyas enjoyed their largest lead of the second half, 54-51.  But the joy was short-lived, as Peak fouled Connecticut sophomore guard Daniel Hamilton on a three-point attempt.  Hamilton converted on all three attempts to tie the game for the sixth time.  From there, Connecticut continued to draw fouls and make their free throws, while Georgetown struggled to hit jump shots.

With 35 seconds to go, Georgetown trailed by just three points and had possession of the ball.  After the Blue and Gray struggled to set up the offense, an untimely turnover from freshman center Jessie Govan ended any legitimate chance for a Hoya victory.

The Hoyas will return to Big East action on Tuesday when they will take on Creighton (13-6, 4-2 Big East) at Verizon Center.  The game will be broadcast on Fox Sports One.  Tip-off is set for 6:30 p.m. 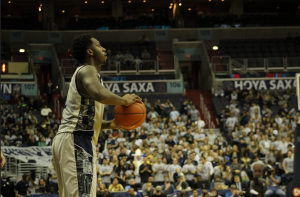 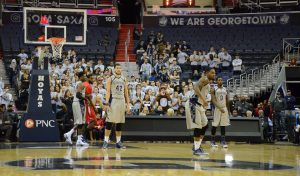 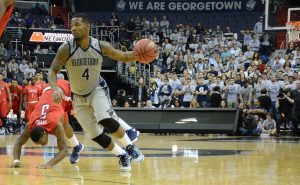 We Are Georgetown and You’re Not: Hoyas and Blue Devils Battle in NY