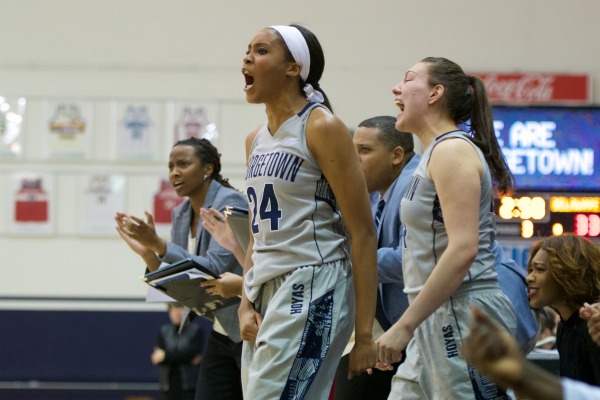 Villanova opened the scoring and jumped to an early 13-6 lead, but Georgetown stepped up their defense, and found their groove offensively to come back to lead by 1 to close the first quarter. The second quarter was tightly contested, with no team holding an advantage for long. A Wildcat layup at the buzzer gave Villanova a 28-26 lead at the half. In the third quarter, Woodard, Adomako, and Battle took over, and the Hoyas jumped out to a lead as large as nine points. Villanova cut it to a seven-point deficit at the end of the quarter.

The Hoyas lead 44-37 after 30 minutes of play, but a drought by Georgetown allowed a 10-0 Wildcats run, and Villanova took the lead. Adomako sparked the Georgetown offense with a two point jumper to bring the score to 47-46 Villanova with 3:32 left in the fourth quarter. White made a pair of free throws, and the Hoyas went on an 11-2 run to hang on for the win.

Shooting was the biggest disparity between the teams, with Georgetown shooting 40 percent (23-57), and 50 percent (3-6) from behind the arc. Villanova shot only 28 percent (18-64) and 30 percent (8-27) from three-point range. Poor shooting by the Wildcats was in part due to the Hoyas’ defense, which blocked 6 shots and forced 10 turnovers– five of which were steals. The Wildcats also played tight on-ball defense, forcing 13 turnovers– nine of which were steals– but lacked the ability to contest shots, blocking only one, and allowing the high Hoya shooting percentage.

The win snaps a four-game losing streak in conference play, and brings Georgetown to eighth in the Big East, 5 games behind the leader, no. 24 DePaul Blue Demons (16-6, 8-1 Big East).

The Hoyas will look to build a winning streak next weekend, with a set of away games. Tipoff against the Providence Friars is set for Friday at 7 p. m., and against the Creighton Bluejays at 2 p. m. on Sunday. Games will be broadcast on the Big East Digital Network.