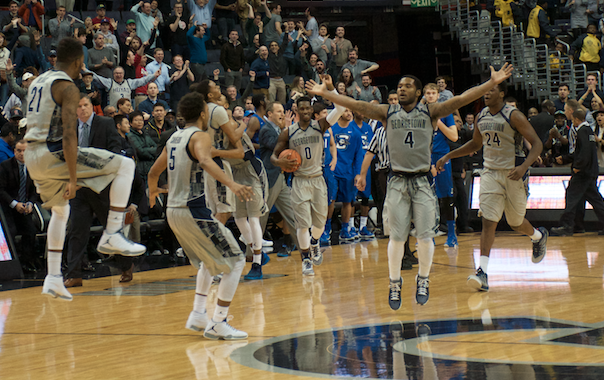 They were left for dead. 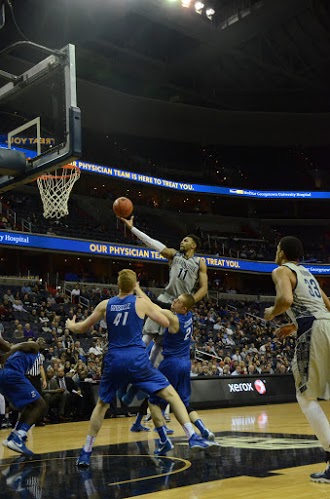 But senior guard D’Vauntes Smith-Rivera had other ideas.

His two game-winning free throws with 6.2 seconds left capped a thrilling 15-3 Georgetown run to close the game, as the Hoyas eked by Creighton 74-73 in front of a sparse, but loud, crowd of 6,897 fans at Verizon Center.

“It was a big game. I like the way our guys kept fighting,” said Georgetown Head Coach John Thompson III. “There was a lot of adversity coming from a lot of different angles throughout the game and I liked the way we kept fighting and kept plugging.”

Sophomore forward Isaac Copeland had career-highs in both rebounds, 10, and assists, seven, to accompany his seven points, while sophomore guard L.J. Peak added 11 points off the bench and freshman forward Marcus Derrickson had 10.

“Georgetown made some plays down the stretch. It felt like we dominated the game for the most part, for 37 minutes, and we didn’t execute very well late,” said Creighton Head Coach Greg McDermott. “As their coach I have to find a way to bring my team home in that situation and I didn’t do my job today.”

After Watson’s layup tied the Bluejays’ largest lead of the game, 70-59, with 2:32 left, the Hoyas closing run began with a quick three-pointer by Derrickson on the next possession followed by a free throw from senior guard Riyan Williams to make it 70-63 with 1:40 left.

Creighton senior center Geoffrey Grosselle proceeded to make one of two free throws before the Hoyas scored seven consecutive points off two Creighton turnovers, with freshman guard Kaleb Johnson’s emphatic breakaway dunk off his own steal cutting the deficit to one point, 71-70, with 50 seconds remaining.

Senior guard James Milliken proceeded to make two free throws for the Bluejays to extend the lead back to 73-70 only to have junior forward Reggie Cameron’s putback off a Peak miss cut it back to one point, 73-72, with 30 seconds left. 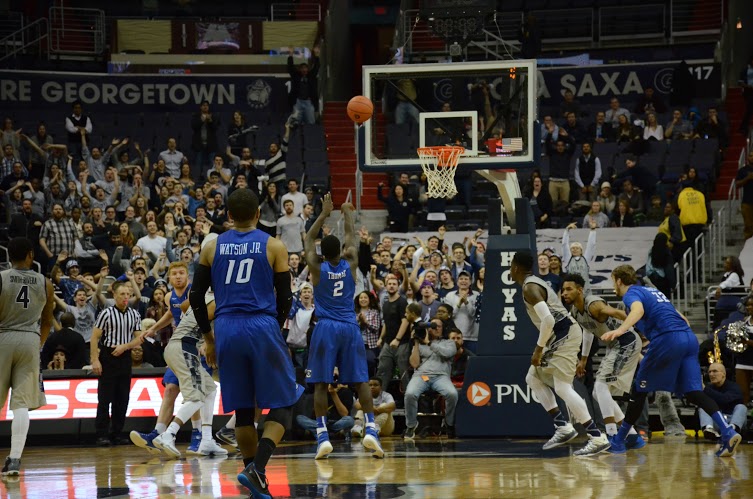 Creighton freshman guard Khryi Thomas missed both of his free throw attempts with 23 seconds remaining to give Smith-Rivera the opportunity to win the game for the Hoyas, who had no timeouts remaining. Smith-Rivera instructed his teammates to clear out before the senior co-captain drove to the basket and was fouled by Watson.

“I just knew we needed plays to be made,” said Smith-Rivera of the final play. “[Coach] trusted me and I wanted to come through.”

Making the two game-winning free throws was a foregone conclusion to him.

“I didn’t really think about it too much,” said Smith-Rivera. “I shoot every day. My teammates instill the confidence in me to know down the stretch you’ve got to make the plays and that’s what I wanted to do.”

All in all during the closing run, five different Hoyas scored and others, such as Peak, contributed timely steals and rebounds.

The first half was a back-and-forth affair between both teams, with 11 lead changes. Creighton used an initial 9-2 run to jump out to a 14-9 lead after a dunk from junior center Zach Hanson at the 12:55 mark. The Hoyas responded with an 8-2 run to retake the lead, 17-16, after a Smith-Rivera three-pointer with 8:14 left.

With the Hoyas up 24-21 after another Smith-Rivera basket with 6:29 left in the half, the Bluejays embarked on a 10-0 run over the next 2:27 to take a 31-24 lead, their largest lead up to that point. But fueled by six points in the final 2:33 by seldom-used sophomore forward Trey Mourning, the Hoyas closed the half on an 8-0 run to lead 32-31 at halftime.

After a Derrickson four-point play to open the Hoyas’ second half scoring, the Bluejays went on a 15-5 run to open the half and stretch out a 48-41 lead at the 13:07 mark. The Hoyas never cut the deficit to less than three points until the final minute after an and-one dunk from Peak made it 54-51 Bluejays with 9:20 left.

The Hoyas will return to action at Verizon Center this Saturday night when they host No. 10 Providence (17-4, 5-3 Big East) for an 8:00p.m tip. The game will be televised on Fox Sports 1. 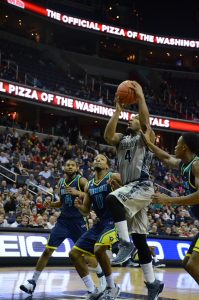