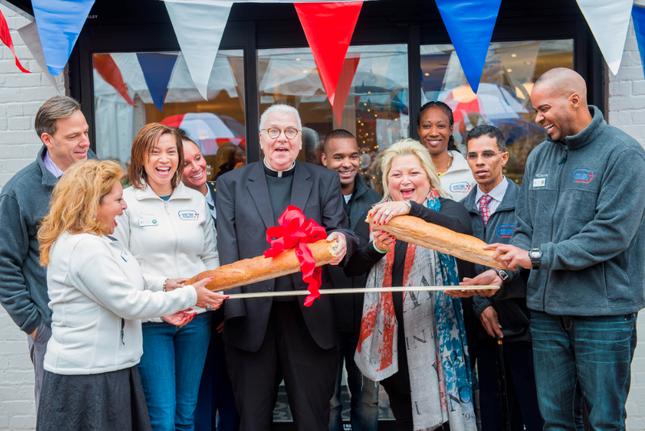 The University held a memorial mass in Dahlgren Chapel of the Sacred Heart on Jan. 27 in honor of Father Richard Curry, S.J., who passed away on Dec. 19. A professor of Catholic Studies and theater, the co-founder of Dog Tag Bakery and founder of the National Theater Workshop of the Handicapped, Curry’s life and memory were celebrated by members of Georgetown’s Jesuit community and his former students and colleagues during the service.

“This afternoon we have gathered to remember and to acknowledge that Father Curry’s life was a beautiful thing, and each one of our lives is better, richer and more full because of his life,” said Father Joseph Lingan, S.J. in his homily. “We gather to remember and celebrate a remarkable man of compassion and ideals, a man of courage and intelligence, a man of depth and generosity, a man of faith, a man of humor.”

Lingan spoke of Curry’s many passions in his sermon, saying that “In our first reading [Isaiah 25: 6-8], Isaiah speaks of a divine banquet, a feast of rich food for all peoples, with the best of meats and finest wines. And since Isaiah’s menu does not mention them, I’m confident that Fr. Curry has suggested the addition of good soups, fine breads and other baked goods … and I suspect he’s even trying to coordinate a flash mob to entertain those who are present. And let’s be honest: with Father Curry present, that banquet would never be the same.”

Curry was the author of two cookbooks, “The Secrets of Jesuit Breadmaking” and “The Secrets of Jesuit Soupmaking: A Year of Our Soups.” In 2014, he founded Dog Tag Bakery, which aims to help military veterans transition to civilian life. Veterans are hired as ‘fellows’ and take courses in business and entrepreneurship at Georgetown’s School of Continuing Studies while also rotating through roles and projects at the storefront to build skills and experience. On campus, he was also particularly well-known by students for his “Theater and the Catholic Imagination” class, which included a flash mob dance performed across campus each semester.

Professor Barbara Mujica, advisor to the Georgetown University Student Veteran Association, offered the first of three reflections on his life at the mass. “The friendship Rick Curry and I shared was cemented by four great loves, not necessarily presented in order: student veterans, theater, cooking, and God,” she said. “They’re all interconnected.”

“When I think back over the time I enjoyed Rick’s friendship, one of my happiest thoughts is that in spite of all the struggles, he lived to see Dog Tag Bakery open and turn into a thriving business,” she said. “He said he wanted it to be a happy place, and it is.”

Mujica was followed by Chris Yedibalian (COL ‘13), Business Manager at Dog Tag, Inc. and Curry’s former Teaching Assistant, who shared his memories of learning from and working with Father Curry and his fierce dedication to his many passions.

“He had a drive unlike anyone I’ve ever met,” Yedibalian said. “He loved the bakery, he loved our staff, and he loved his classes at Georgetown. He loved his class so much that he refused to miss it. Barely able to walk this past semester, he showed up to class week after week in a wheelchair, with an oxygen canister by his side, knowing full well that this level of exertion would put him back in the hospital the next day. … It simply was not an option that he was ever going to miss being there with his students,” he recalled.

Yedibalian also described Curry’s unorthodox teaching methods, and his commitment to not only teaching a class but building relationships between students.

“His task was to create a community of friends amongst a group of students from all different walks of life. His success was determined by how well students responded to the course’s capstone assignment, a dramatic monologue performance, where each student spoke to the class about what it was he or she truly believed in,” Yedibalian said.”Father Curry’s goal with the monologues and the class was never to give out a grade but to hone in on what truly made each person happy. He wanted everyone to be happy.”

William Wrotniak (SFS ‘18), was a student in Curry’s last class this fall, and likewise recalled the unique experience of the course. “He created an environment which allowed all his students to bond with each other, step outside our comfort zones and experience new things in order to find and share our beliefs and ways in the world. When I think about Father Curry, I see the ultimate man for others. I also see a man whose faith in God was without limit,” Wrotniak said.

He also reflected on the way Curry’s approach to challenges he faced shaped not only his life but that of his students who learned from him. “It is clear to me that Father [Curry] did not see his missing right arm as a disability, but as God’s challenge to him to lead others in similar circumstances,” Wrotniak said. “This is why he thought of his disability as a gift from God, a gift he was given not only for his benefit but a gift he had to benefit others. This quality of Father Curry, the ability to turn any situation, no matter how bad it could be, into a positive situation, is something I will forever hold in my heart.”

Curry was buried at the Jesuit Center in Wernersville, Penn. in December, following a funeral mass at Holy Trinity Catholic Church.

“Go in peace, he would always say at the end of each class,” Yedibalian said. “So in peace, we go, and in peace, Father Curry, we hope you rest.”