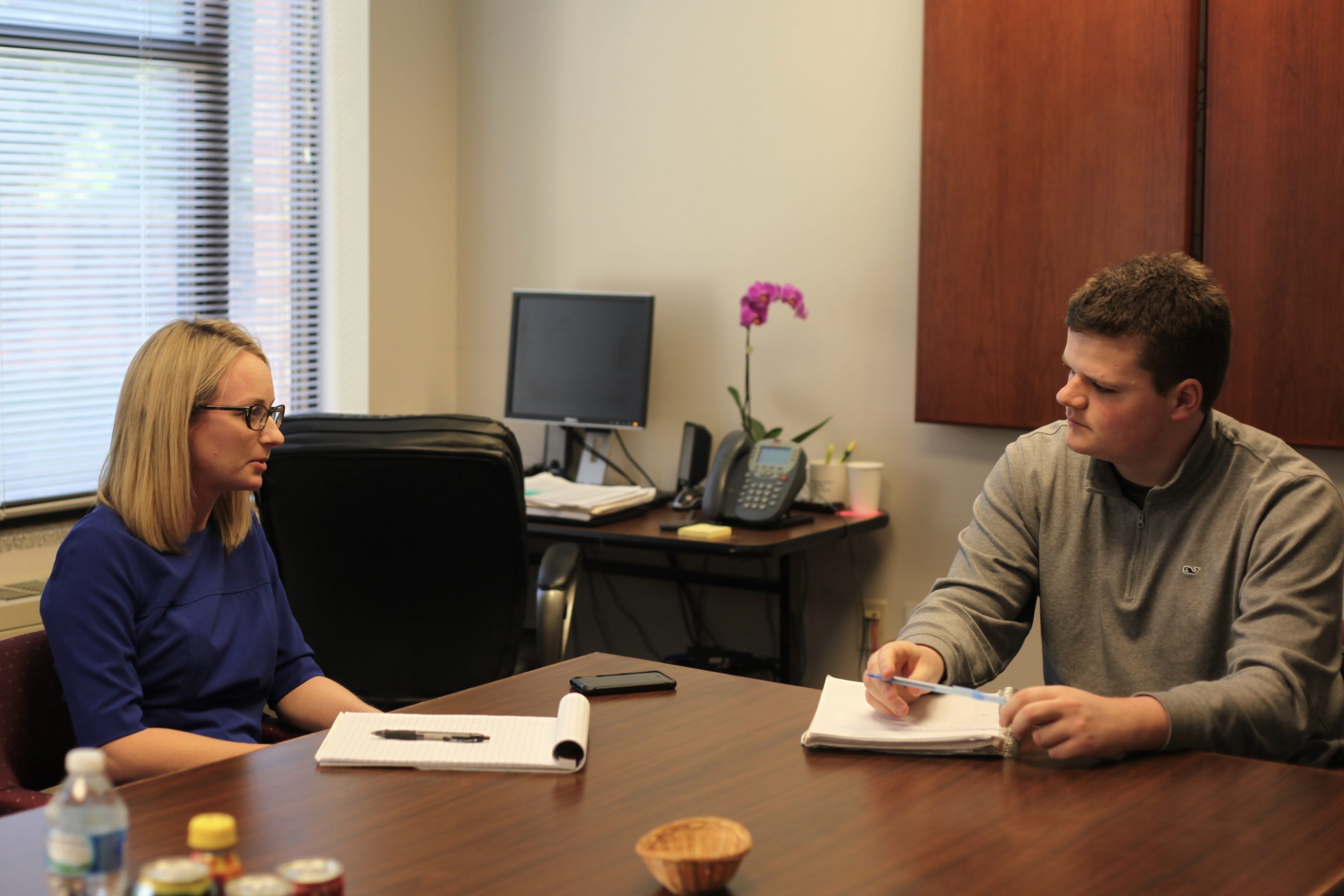 On January 11th, Georgetown hired its first full-time Title IX Coordinator, Laura Cutway. Previously, according to the university website, Georgetown employed several deputy coordinators for the main campus, law center, and other Georgetown campuses. Cutway’s position includes overseeing Title IX compliance on all campuses, a role that is still under construction, much like her office. However, she is jumping right into her role. The Voice had an opportunity to sit down with Ms. Cutway to discuss her new position. 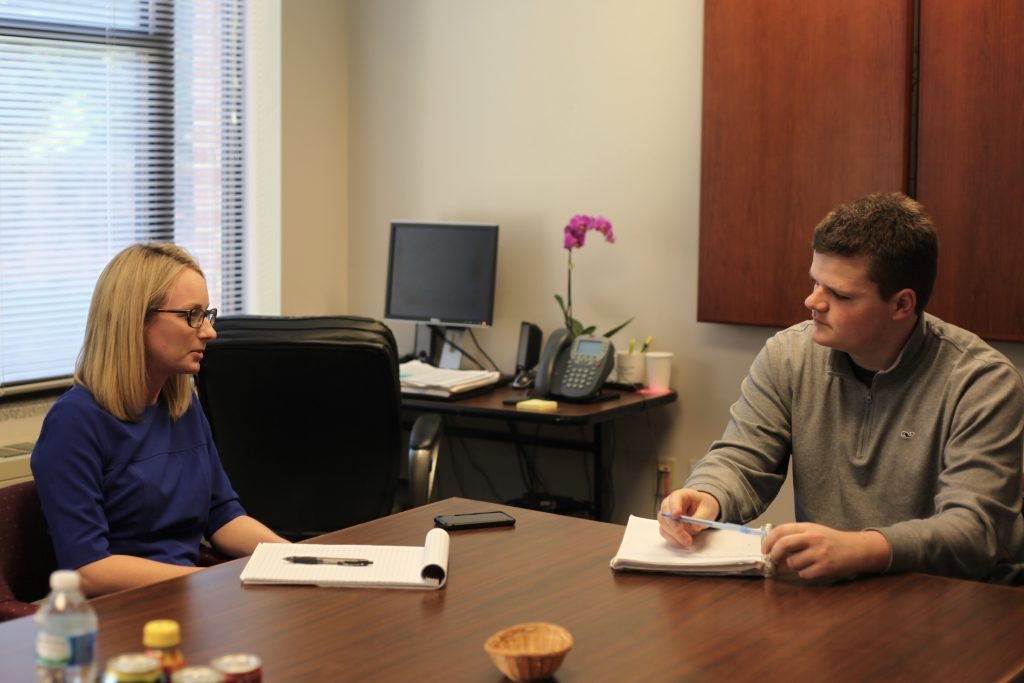 The Voice: What brought you to Georgetown?

Laura Cutway: I did my undergrad and my master’s at Villanova University. My master’s is in counseling and in human relations, and then I moved down here shortly after and worked at Catholic University before switching over to Georgetown. I have been with Georgetown University at the Law Center for the past five and a half years working as the Director of Disability Services and then for the last four and a half years as the Sexual Assault and Relationship Violence Liaison. I’ve been involved with the main campus since we began talking about Title IX. I’ve definitely been involved in the sexual misconduct policy, when we revised the website, working with Health Education Services on the different resources, so I’ve been a part of main campus in that process.

LC: It was pretty seamless. I knew that they searched for a while for a candidate. I ended up talking with [Rosemary Kilkenny, Georgetown’s Vice President for Institutional Diversity and Equity] about it, and it’s something that I’d been interested in and was thinking about. Then I just applied and went through the interview process. Luckily it was really helpful that I know a lot of the different stakeholders here so I knew a little bit about what to expect coming into the position because I was so familiar with the people.

TV: Talk about what your role is and what the responsibilities of the Title IX coordinator are.

LC: It’s definitely an oversight role. I see there being three main initiatives under this position: education, prevention, and response. The university has been doing hugely important work for many years, but I think that it is very important that we have a full time person that can be completely dedicated to this role. There have already been a number of initiatives, but [we want to make] sure that students are aware of the resources on campus, that they know where to report, they know what our definitions are, they’re fully knowledgeable about what would constitute sexual misconduct. Also, our trainings that we’ve been doing, educating the student population, and this role oversees all campuses. We train undergraduates and are also launching training for graduate students as well. So there’s a huge component for education here.

The second initiative is preventing sexual misconduct. I’d love to get to a place where we don’t have any sexual assault on campus. One of the best practices that I know that’s been recommended would be a bystander intervention program, so I’d love to be part of that initiative to get that up and running in a robust program there. Then, lastly would be response, so responding to sexual misconduct on campus and making sure that the process is fair and equitable for all parties involved.

TV: Can you explain exactly what the bystander intervention program would be?

LC: Sure. It would be educating students on what to do and encouraging and empowering students to stand up and say something when they feel like something maybe isn’t quite right. That can often be an awkward conversation for students to have, so it’s giving them tools on how to actually engage in that process. That involves a little bit of a culture shift. I don’t think that people naturally want to get involved in other people’s business, so it’s giving them ways to naturally have those conversations so we can protect one another. I think that’s a responsibility of all of us on this campus, to respect one another and be there for one another, stand up for one another.

LC: I think that generally there’s some confusion over roles. I think that students know that there are a number of different resources. I’m very proud of Georgetown and how they’ve invested in the resources that they already have on campus. We’ll be streamlining some of those processes so that people know where to report and they know what to expect when they report. I think that would be very important in this position. I think that the greatest strength right now are the resources that are there. There’s a lot that’s offered for students, a lot of great people doing really thoughtful work, and I think that that’s hugely important.

TV: Can you talk specifically about some of those resources?

LC: When I was in my sexual assault counselor role, at the Law Center, I was part of Health Education Services, so I came to know what support they offer and they’re very talented counselors and really make a world of difference for students. I think our counseling system is very good. We also have a very streamlined conduct process, and I think that that’s been very helpful for students going through it. I also am really excited about the Campus Climate Survey. It was launched last week. I actually probably couldn’t have started at a better time because I’m going to inherit all of this data which is going to be wonderful. I’ll be able to take it and really be able to tailor my efforts and my priorities and be able to make changes moving forward.

TV: Can you talk about the mindset that went into the survey and the planning. How effective do you think it’s going to be, and what are you going to be able to draw from it?

LC: Sure. It’s been a very thoughtful process, there were many many stakeholders involved, students included, staff and faculty, so I think they used the best practices. We were able to see the results of the survey that AAU [American Association of Universities] did, and I think that helped us reform what we wanted to do … [There were] 27 different universities that took part in the climate survey last year, including Harvard and Yale, and all these big name universities, and they were able to publish their results. We were able to see that and then make some changes on our end. We need as many students to take it as possible and so we have a huge marketing campaign that was really wonderful in coming up with all the slogans that you see around campus, and really promoting the need to take the survey. If you see the thermometer in Red Square, it creates an environment of excitement around it, and also the importance of why we’re doing it. I’m hoping to see themes. Fifty percent [participation] would be wonderful, in that themes emerge that I can really work from to determine where I need to target my efforts. Is there a particular place on campus that needs some specific targeting or is it students that are confused about the process? It’ll really show, I’m hoping, what the climate feels like here for students.

TV: Can you talk a little bit about specific initiatives?

LC: I think it will really depend on what comes out of the survey … the results will be available in May and we’re really planning this summer to talk about specific programming that can happen.

TV: Can you talk a little bit about your past and what sort of experiences do you think will lend them to helping you do the best job here at Georgetown?

LC: My background is in disability services and sexual assault services. My role was focused on the ADA, the American with Disabilities Act, and it was a compliance based role. I’m overseeing the university’s response. I think that that background will really help me to understand what’s required of the law, what’s in the spirit of the law, and where we want to be as an institution. And my experience as a counselor, specifically crisis counselor, will be hugely helpful in working with and connecting with students and being approachable and not being this person that is just a person in an office. I want to be a face, I want people to feel comfortable coming and talking with me. There are restrictions … I’m not a confidential person anymore and so I’ll have to navigate that conversation upfront with the student, but I want students to be part of this process and to partner with me to make the changes that need to happen on campus. But I also think I have the four and half years of working with survivors and I know a lot of what can be difficult for them going through this process. I’ve worked closely with the survivors and then with our deputy title IX coordinator at the Law Center and so I’ve seen also what comes, what the respondents need and what would be helpful for them. So I think I have a good understanding of the students. Now, granted, it will be different [with undergraduates], so I do look forward to getting to know the needs of this particular campus.

TV: As Title IX coordinator, will you be working in conjunction with other services such as Counseling and Psychiatric Services (CAPS)?

LC: Absolutely. I see this role very much being connected to Health Education Services, CAPS, Student Conduct, all the deputy title IX coordinators, and Student Affairs. It’s really a connection between all of the different campus stakeholders that are working with students on these issues that come up.

TV: When we were talking about the reporting process, you already spoke about some of the flaws that you might see. What sort of steps do you think you’ll take to sort of improve on this?

LC: I think students in general are reluctant to come forward for a number of different reasons. It can be re-traumatizing, and it’s just not in their best interest or not worth it at this moment to go through the reporting process. And that’s a conversation a student would have to have with their counselor, and that’s why we’ve invested so heavily in our confidential counselors. But I think some students also won’t come forward because they don’t know what to expect, and I think that’s a problem. And I think it’s not specific necessarily to here, I think it’s in general. It’s a new process. Usually people don’t pay attention to the sexual misconduct process until you actually have to go through it. And so if I can make that process as clear as possible for students, so having a road map, having information online, updating different websites to have just a clear process, I think that would be helpful for students to know what it’s going to feel like and what to expect if they were to go through it.

More: on the record, Title IX