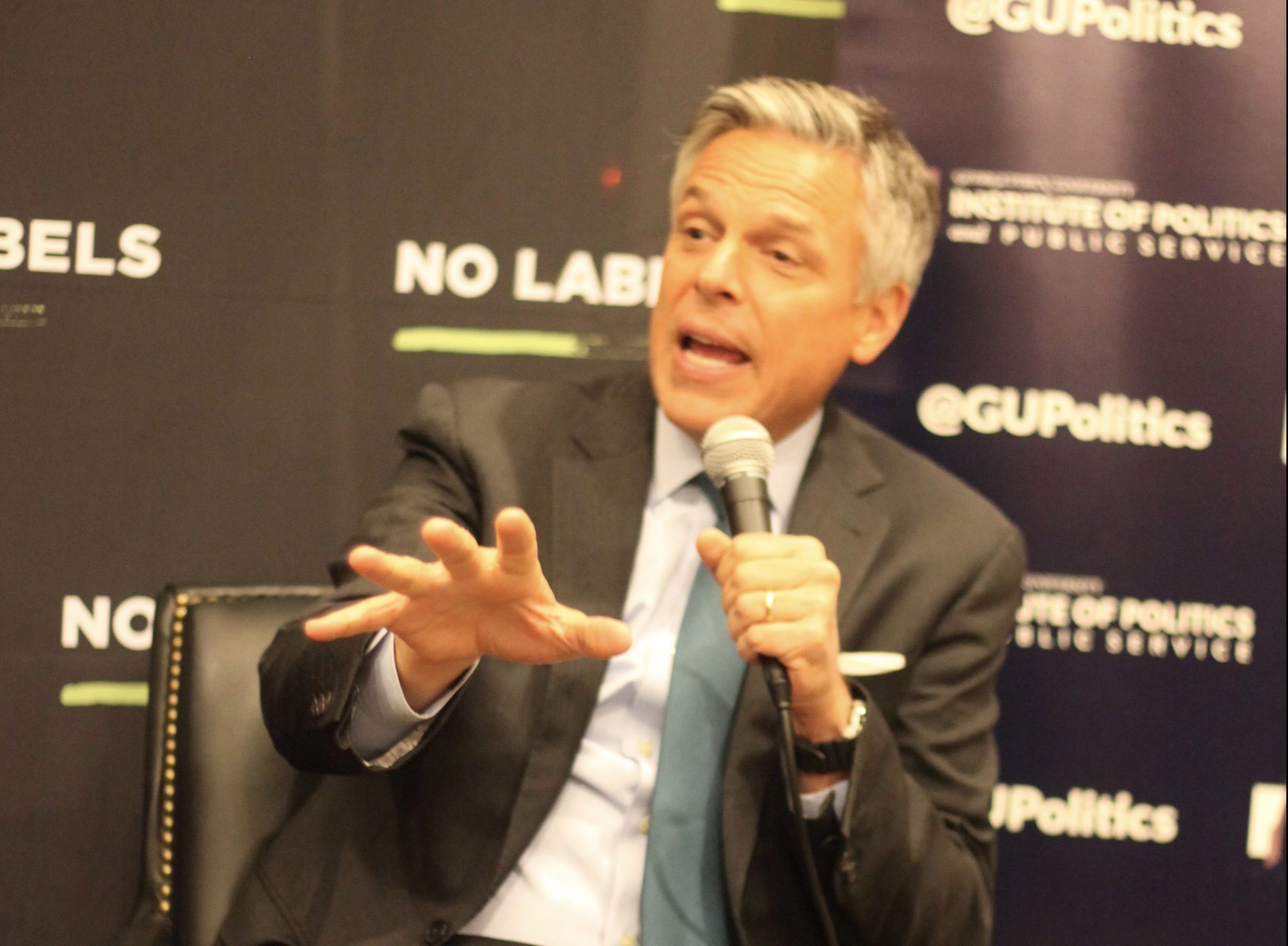 Jon Huntsman, former Utah Governor and presidential candidate and the co-chair of the organization No Labels spoke with students about bipartisanship on Thursday, Jan. 28. The event was hosted by No Labels Georgetown and co-sponsored by the International Relations Club, the College Republicans, and the Institute of Politics and Public Service. Huntsman addressed a crowd of roughly 50, which was a mix of undergraduate students and graduate students from the McCourt School of Public Policy.

Max Rosner (COL ‘18), the Mid-Atlantic Regional Director for the organization, led the discussion with Huntsman, who addressed several political issues facing the United States. He began by stressing the importance of service in the government. “Some call it politics, I call it public service,” Huntsman said, after making a couple of self-deprecating jokes about his failed presidential candidacy in 2012. Despite a period of gridlock that Huntsman blamed on his own generation, he expressed optimism in the future of the United States.

Rosner’s first question involved the rise of ISIS, one of the biggest issues in the 2016 presidential race. “How do you change the hearts and minds of people who’ve fallen into radicalism?” Huntsman asked, before continuing to say that the United States must contribute to the security of the Middle East and provide opportunity for the people living there.

Rosner also asked Huntsman about partisan gridlock in Congress, and the issues that he believed could make progress towards breaking this gridlock. He pointed to air pollution as a possible topic for Democrats and Republicans to unite on addressing. A major theme throughout the talk was the partisanship that he believes dominates American politics today. “It’s not the name on the jersey, but the color of the jersey,” he said, when explaining the tendencies of voters.

The talk then transitioned into the No Labels Movement, an initiative intended to push politicians past partisanship in Congress. Huntsman discussed the three main objectives of the program: to create a grassroots movement of one million people or more and an “army” of Republicans and Democrats on Capitol Hill that would work to break partisan gridlock, and to find substance on which the organization can base its problem solving. The governor also discussed a “National Strategic Agenda,” which involves creating jobs, balancing the budget, entitlement reform, and energy security.

Huntsman, who ran in the Republican primary in 2012, tackled was the future of the Republican party in light of the rise of Donald Trump. He criticized the party for losing its “can-do” attitude and for its lack of inclusiveness, and spoke of the potential for the creation of a third Populist party.

The forum then opened up for questions. The first question from the audience concerned campaign finance reform, which Huntsman stated was diminishing the trust people have in politics. He said that the financial influence of large corporations and super PACs (political action committees) are contributing to voter apathy and a low voter turnout. The second question came from a student who asked Huntsman about his beliefs concerning civic education, or the teaching of government and history courses in school. Huntsman stressed the importance of understanding democratic ideals and history in education. Other students asked about Huntsman’s past, such as his decision to transfer from the University of Utah to University of Pennsylvania, and other political issues such as the Trans-Pacific trade deal and the primary system in the United States.

After the talk was over, Huntsman stayed for about 20 minutes, talking and taking photos with students.

Andrew Kitchel (MPP ‘17) , a first year Master of Public Policy student, said he appreciated Huntsman’s openness. “It was really interesting to hear [Governor Huntsman] talk about a bunch of different issues that are facing the country and to be really candid,” he said.