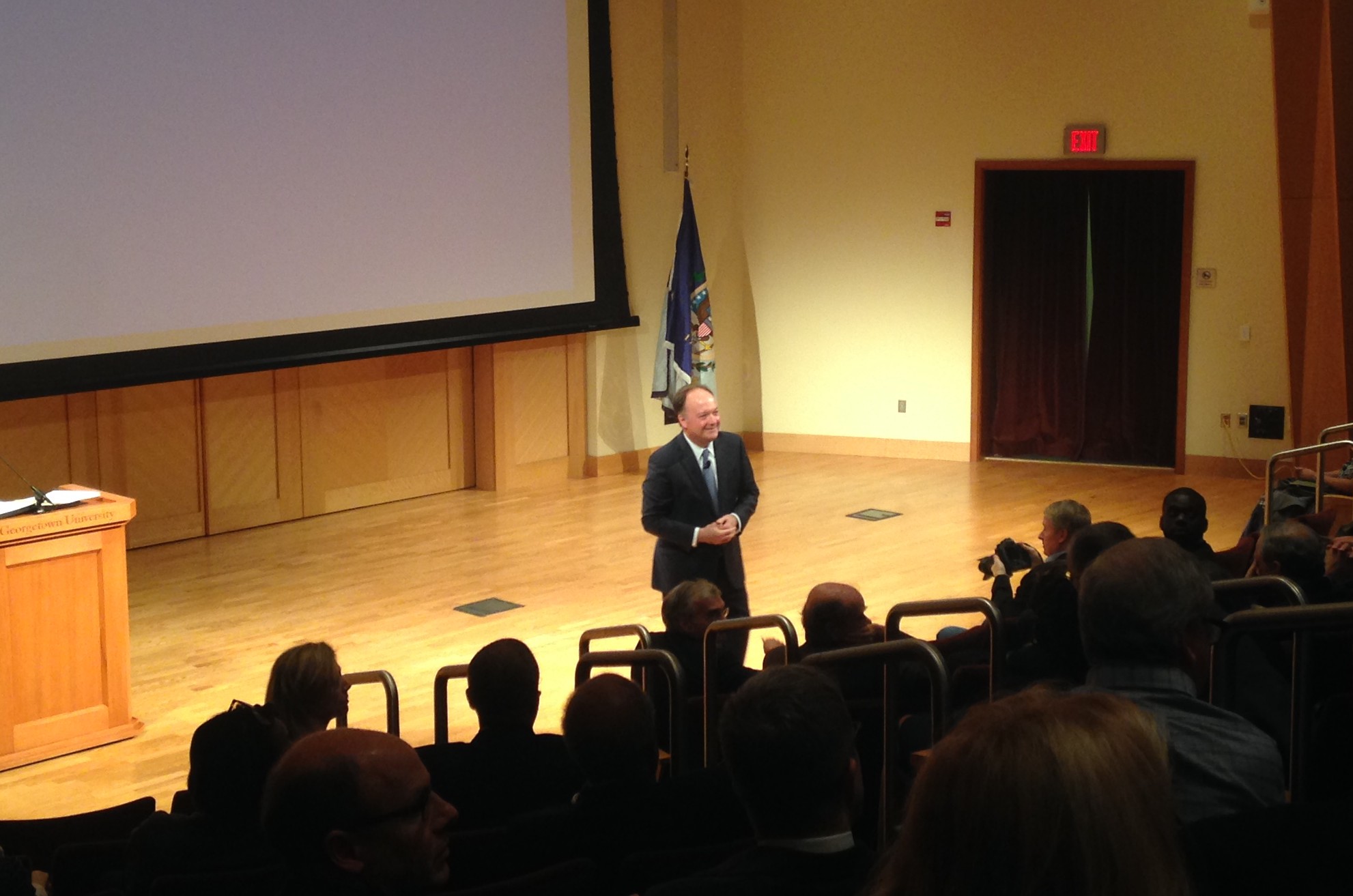 University President John DeGioia announced four new commitments to addressing structural racial inequality at a speech on Feb. 4: the establishment of an African American Studies department, a research center on racial injustice, a recruitment effort for faculty members and researchers, and the creation of a new senior officer position to lead these efforts. A “Working Group on Racial Injustice: A Georgetown Response” is also to be established to guide the implementation of these efforts, which DeGioia described as coming at an ‘important moment’ in the University’s history.

“It is this understanding that we can never be static, that our journey of engaging with primary issues of justice that characterizes the modern history of Georgetown, demands ever more of us, continually,” DeGioia said at the event, called a “Conversation on Racial Injustice in America: A Framework for Georgetown’s Future Engagement.” “What are the issues of justice that are salient to us now that demand further engagement for Georgetown, because they are so significant for our nation, for all of us?” he asked.

DeGioia began by highlighting the work that Georgetown community members, professors and administrators have done over the last forty years, ranging from former basketball coach John Thompson Jr. to Vice President for Institutional Diversity and Equity Rosemary Kilkenny to former GU Law Center Dean of Admissions David Wilmot, and emphasized that he sees this new announcement as a progression of that growth.

“We have pursued, given these varied constituencies, organic growth, anticipating change, emphasizing alignment among our multiple parts,” he said. “This approach, which defines our work as a university community, should guide our efforts to take the steps I suggest are needed to respond to the demands of this moment, where we are squarely facing unresolved issues of structural injustice in our nation.” He then laid out four key initiatives that he believes will improve Georgetown’s response to inequalities, as well as a fifth to guide their implementation.

“The second step is to amplify this center of gravity. We must establish a new research center that studies racial issues and the persistent and enduring legacy of racism,” he said. “We need to address the structural causes and the root of persistent inequalities, persistent racial injustice, in American society.”

“Understanding and solving these issues cannot be achieved with one body of knowledge, within one discipline,” he added. “We need teams of researchers, working to make progress. We need to tap all the relevant external funding institutions to make the research center sustainable.”

“Third, we can’t achieve either of these two goals without a critical mass of new colleagues, dedicated to this work,” DeGioia said. The university is to hire eight new faculty members to contribute to the academic department and the research center, with four to be hired for the next academic year, 2016-2017, and four more recruitments in the following year, in addition to existing recruitment efforts, he said.

Additionally, “we will need a new senior officer,” said DeGioia, “who will support the efforts of establishing the department, interdisciplinary program, research center, and supporting the recruitment of this cohort of faculty.”

A Working Group is to be formed and charged with evaluating the best structure for the academic department and considering comparable models at other institutions to shape Georgetown’s.

“I’m presenting this charge that we do our part as an important educational community,” DeGioia said, “to hasten the common good and the shared justice for those from whom it has been too long denied.”

During the question and answer session following DeGioia’s remarks, audience members pressed for more details on the initiatives, and asked about the way in which they are to be implemented.

Corey Stewart (SFS ‘15), a Program Coordinator at the Georgetown Scholarship Program, asked about the extent to which recruitment efforts are intended to apply to students. “My question for you is, you mentioned quite a bit what you’re trying to do to attract more faculty of color, I’m curious about what kind of commitments can be made to attract more students of color to this campus, and to apply?” he asked.

“The fundamental first step, always, is to ensure that we sustain our commitment to need-blind admissions,” DeGioia answered. “Meeting full need is the most significant way in which we are able to ensure that we have the kind of student body that we aspire to,” he said. Additionally, he named outreach as another key element in attracting diverse applicants, citing Georgetown’s partnership with Cristo Rey network of urban Catholic high schools as an example of effective outreach.

Queen Adesuyi (COL ‘16) also asked DeGioia about Georgetown’s treatment of its workers during the recent snow storm and how the university intends to approach that manifestation of injustice. DeGioia referred to the Just Employment Policy and Georgetown’s commitment to paying a living wage as examples of the university’s response to this, and added that the shortage of space during the blizzard needed to be looked into further.

Yerlyn Rojas (COL ‘16), a senior Women and Gender Studies major, asked about the future of the Latino Studies program, in light of the commitments to addressing issues of racial inequality. DeGioia did not answer the question directly, but said that he hopes the Working Group will engage with that issue. “This is work we will all do together,” he said.

The speech, which was announced by email on Tuesday, Feb. 2, had a low student turnout, but DeGioia said afterwards that he hopes students will “catch up” with the talk when it is posted on the university’s website, as well as that ‘the multiplier effect’ of students discussing the initiatives will help the information spread.

When asked after the event about student involvement in the implementation process going forward, DeGioia said that the exact structure of the Working Group is still under construction. “We’re in the process of putting it together. Students are invaluable contributors, and what we want to make sure is that we get the right framework to do this work,” he said. “And that’ll be a work in progress, we’ll be announcing more in the very near future, and my sense is that there will be a way to ensure we have an appropriate balance on that.”

Rojas hopes that this announcement is a sign of Georgetown prioritizing engaging with diversity and assigning resources to addressing it. “I just hope that with the creation of this [research] center, we can explore more intersectionality and that there is room for other voices and other programs to be created as well,” she said. “Because if we can create this athletic center [the John R. Thompson Jr. Intercollegiate Athletics Center], I think we can create other opportunities for academia.”

Editor’s Note: This article has been updated to include the name of the Working Group.