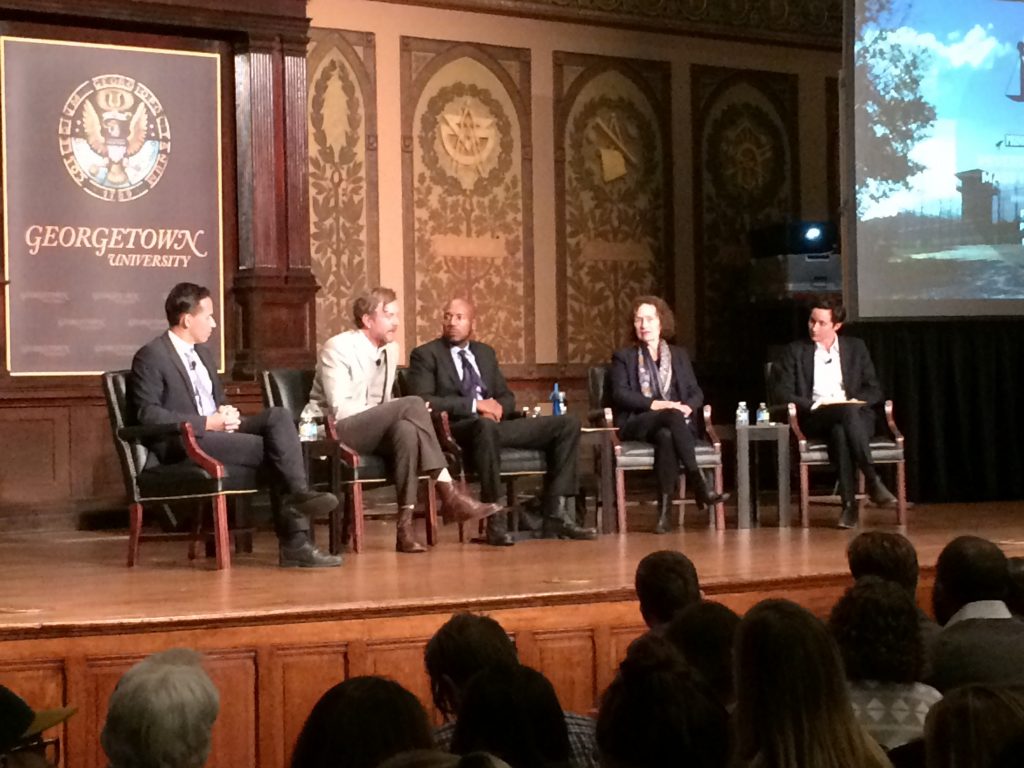 The Prisons and Justice Initiative held its launch event, “Reversing the Tide of Mass Incarceration: Prospects for Prison Reform” on Feb. 9. The Initiative was founded to “bring together leading scholars, practitioners, and students to examine the problem of mass incarceration,” according to their mission statement. To meet the high demands of attendance, the conversation was relocated from Copley Hall to Gaston Hall.

The director of the initiative, Professor Marc Howard, introduced the event and the project, and then invited various members of the program’s Faculty Advisory Board to share their own views and research in regards to mass incarceration. He started his address by saying people need to understand “the reality of mass incarceration in America: where 2.3 million Americans are behind bars at any given moment, or 4.5 million Americans are on parole or probation … that this system is an abomination and a disgrace to our country’s ideals and principles.”

He shared how his own realization of this “systemic failure” came to be, by helping a friend who was wrongfully convicted of murder to get out of jail, and understanding all the hardships of prison life and wrongful accusation. However, he noted that the issue “about the so-called guilty people” is just as precarious as that of those who are innocent, as he explained that “these are people who have made mistakes in their lives, but people who should not necessarily be defined by the worst thing they’ve done in their lives, forever. Add to that how people are treated in prison and how society chooses to treat people that have made mistakes.”

Howard shared his own experience working in the Jessup Correctional Institution, a maximum security prison in Maryland. “It’s the most inspiring teaching experience I’ve ever had,” he said. Howard also elaborated on different projects that he is developing with Jessup and the Initiative. “This semester … I’m teaching a class called Prison Reform Projects, where we go into Jessup and [are] working with another group of Jessup students, and we work collaboratively on a set of prison reform projects,” he said. Georgetown is obligated to get involved in solving issues of social and racial justice, Howard said, seeing as the university has “remarkable faculty that do fascinating work and teaching related to criminal justice and prisons, as well as engaged, committed and passionate students.”

After Howard’s remarks, Georgetown University Law Center (GULC) Professor and former federal prosecutor Paul Butler talked about the issues of racial discrimination within the criminal justice system, specifically towards African Americans. He focused on defining the problem, explaining that “that matters because when you determine what the problem is, that’s when you determine how you create change.” Butler highlighted some of the explanations offered by scholars: black male behavior, strained police-community relations and white supremacy, and solutions for how to deal with them. He said that “if black men are the problem, the solution is to fix black men,” suggesting a renewed approach to education and cultural interactions. He also offered the idea that the government needs to “improve police-community relations,” which have been severely damaged in certain communities. Therefore, he explained, there is a conflict of action and interest, as those people trying to improve police and community relations clash with those who believe the issue is only about white supremacy. The different definitions people find for the problem make fixing it harder, Butler said.

Allegra McLeod, associate professor at GULC, who took the floor after Butler, shared similar insights into systemic abuse and racism. She said that society is too reliant on law enforcement to regulate many day-to-day activities, and that she hoped the initiative could help find alternatives to law enforcement, so that it could be “replaced by other forms of collective, social peace” in areas such as traffic control and discipline in schools.

Music professor Benjamin Harbert shared his own personal research, studying music creation and development in Angola Prison in Louisiana. He spent two years working with the penitentiary to develop his research.  “When I listen to music made in prisons, I also hear the complexity and the irregularity of how we incarcerate,” he said. His work focuses on understanding how music is created to express the situation of those living in prison, and tries to engage with the world beyond the prison. He believes the music created in Angola is an “attempt to say that prison is more than we think.”

Philosophy professor Judith Lichtenberg was the last panelist to take the stage. She said that “there are some self evident truths… some main principles that I think are requirements for criminal justice system.” She highlighted the three minimum principles she believes are needed in any effective criminal system: proportionate punishment, treating like cases alike, and ensuring that prisons don’t do more harm than good. She emphasized that “prison conditions usually make those who live in them worse, not better,” which is a systematic failure. “The idea that justice requires we inflict pain in criminals just for the act of suffering can not be justified; and it seems that it doesn’t really cause any change,” she concluded.

The night ended with a question and answer session in which audience members asked questions about sexual abuse, oppression and stereotyping towards different minorities, and ties between prison gangs and prison guards. Four panelists along with Professor Howard took turns answering questions, after which they prompted attendees to join different projects and groups within the initiative in order to help it gain strength and raise awareness.