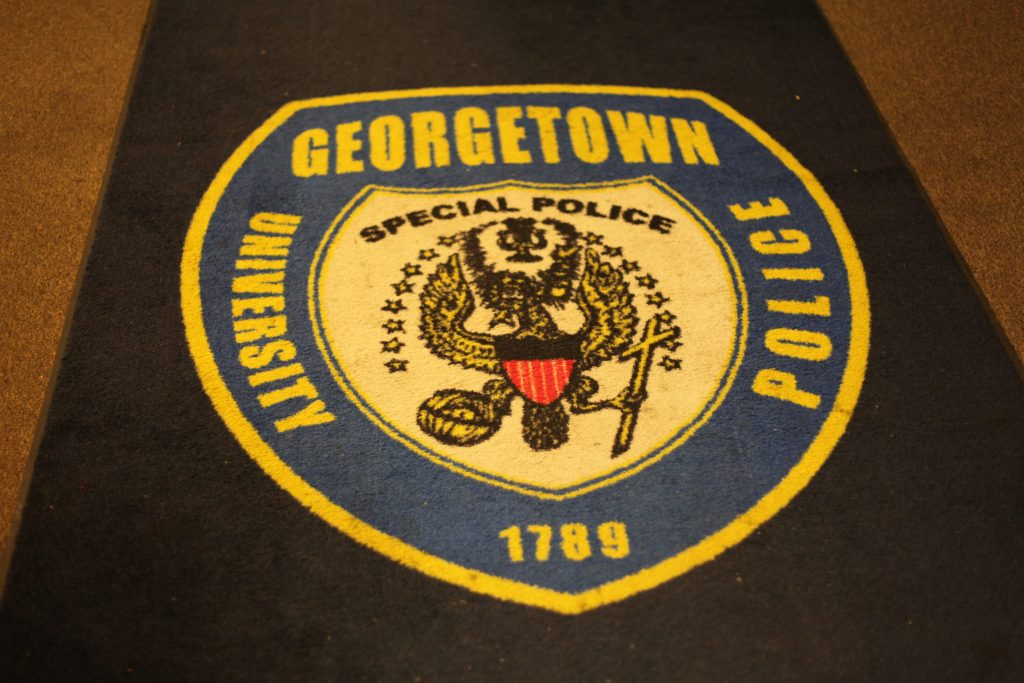 Gruber presented an update and fielded questions from a group of around 15 students. He addressed a diverse range of topics from campus security and training programs to police-student interactions.

The installation of additional card readers in residence halls aims to reduce the number of people who bypass the security guards, according to Gruber. “It puts an extra barrier in,” he said, referring to the card readers as well as a new system of alarms. “If somebody tries to prop open a door or force their way into a perimeter door, we’ll get an alarm and we can send an officer to that location.”

Gruber also informed students about the Sexual Assault Response Team (SART). “W­e have a group of specially trained officers who have had an additional 40 hours of training on trauma and interviewing survivors of sexual assault,” he said. “They’ve had very detailed orientations on the resources available to survivors of sexual assault,” Gruber said, and “they’ve been contacted a few times since they’ve had their training, and it really paid off for both us and the survivor.”

The team, which is available 24 hours a day, is part of an effort to emphasize the importance of interacting properly with survivors, he said. “You only get one chance, just a single chance, to work with that survivor and be there for them and have them coming into this very difficult process with a good outlook.”

In addition to sexual assault resources, Gruber also praised students’ increased involvement in campus safety activities such as self-defense courses. “Members of [Georgetown Against Gun Violence] are also on the Student Safety Advisory Board,” an open group that meets biweekly with Gruber to discuss concerns and give suggestions to GUPD. “Through them pushing this agenda, we have a really good product,” he said of the self-defense training courses. “The SSAB helped me see the fact that it should be open to everybody. For women, men, transgender [people], everybody.”

Due to the heightened threat environment worldwide, GUPD has worked to increase its campus police presence. “You’ll see a cruiser with its lights on by an entrance somewhere, just to promote our visibility,” he said. Additionally, Gruber has re-deployed several officers who are normally on desk duty. “If we can displace crime from campus, displace anything that could happen here, we want to do that.”

After a student asked about the protocol for responding to reports of a missing student, referring to the Feb. 1 incident, Gruber explained the guidelines mandated by local law enforcement and the Clery Act, which governs campus policing and crime reporting and began with immediate notification of MPD. After contacting the student’s cell phone provider, GUPD was able to locate the student through the location pings from her cell phone. “In this case, the ping was exactly where she was, but she was avoiding it. It was within about probably 150 feet of where she was, but she just didn’t want to be found at that point in time.”

When pushed to clarify what constitutes critical evidence for a missing person, Gruber elaborated on the incident. “In this case, based on the evidence that we had, we knew it was critical immediately. MPD just pulled out all the stops. We had boats on the river, we had helicopters up. A lot of resources are spent on something like this. We don’t take any chances.”

Students also asked about the proposed D.C. policing bill, which would expand the jurisdiction of campus police officers to include off-campus locations under certain conditions. The Special Police Officer Enhanced Security Amendment Act contains a provision that would allow GUPD to assist in emergencies on other campuses, with the authorization of the university president; another provision would allow officers to travel to off-campus locations in uniform and include jurisdiction on streets between campus buildings to comply with the Clery Act,

With regards to off-campus authority, “it provides absolutely zero criminal jurisdiction,” according to Gruber. “We can’t enforce laws off campus … What it provides for us is the ability to go off campus for some sort of student conduct violation,” and only in cases where the Office of Neighborhood Life requests assistance from GUPD.

“It’s not something we’re going to do proactively,” Gruber said. “An officer is driving down the street. Big party taking place, people on the lawn, cups, noise, we’re going to keep driving. Unless that complaint comes in over the helpline, we’re not going to act on it.”

Gruber expressed a desire to keep off-campus presence to a minimum. “I never want to see a lot of my police officers outside of campus,” he said. “We have enough problems here, we don’t need to be out there doing a lot of patrol and things like that.”

Students also voiced concerns about availability of SafeRides and were pleased to find the university exploring a contract with Uber to augment the program. “The SafeRides program is always my Achilles’ heel; we really can’t provide as much resources as we’d like to,” Gruber explained. “If we can find some cost savings, … we can provide some Uber support,” adding that a contract would need to be worked out. “I want to provide service to the students so they feel safe when they’re out in the neighborhoods.”

Gruber praised the success of the LiveSafe app, which can be used to provide anonymous tips to the department. “We’ve had tips about people trying doorknobs, people trying to look into cars, a couple of tips we’ve made arrests on,” adding that in many situations people do not wish to talk out loud. “One of them was a man who exposed himself to a woman at Einstein Bagels…so she just used LiveSafe and we arrested the guy within 5 minutes.”

“My job isn’t to stomp out fun or a party wherever I see it,” Gruber assured students. “My job is to keep you guys safe, sometimes from yourselves but definitely from the people that come onto campus to pray against you. And we have a pretty good group of officers. So when you see them, say hi to us once in a while.”