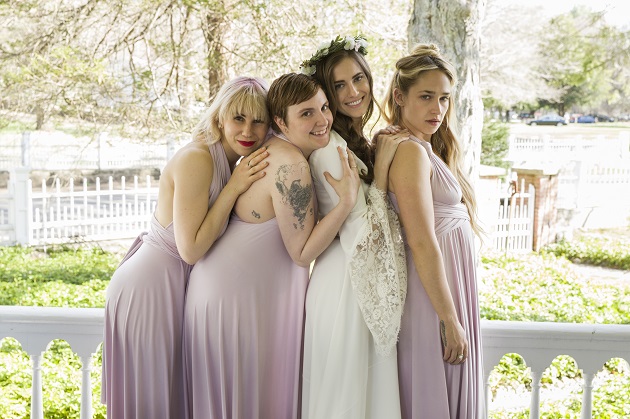 The finale of season four of HBO’s Girls left a series of massive, mostly optimistic cliffhangers. Marnie’s engagement, Shoshanna’s decision to move to Japan, and Hannah’s new relationship all seem to be exciting new directions, yet the euphoric highs seen in the final moments of the season’s final episode held subtle tragedies within them.  After eleven months, the fifth season premiered this past Sunday. To showcase the heavy implications that came with these big decisions, the plot has sped forward seven months to Marnie and Desi’s wedding day. The episode overall is a mild success. Maintaining the positivity and excitement of some characters while dealing with the sadness that their decisions brought others is a difficult balance, but Lena Dunham successfully creates a tragic and humorous vignette to kick off what will be a much larger new chapter in the lives of these characters. 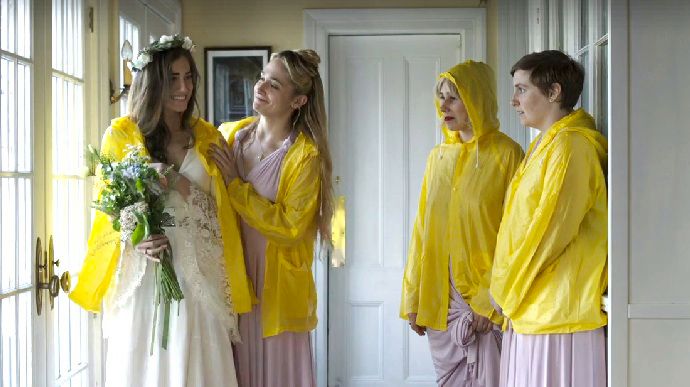 Breaking the typical backdrop of a bleak and quirky yet low-rent Brooklyn, the episode opens with a cut sequence of waiters setting up for the reception at a venue in the woods of Upstate New York. The setting makes for a nice, isolated change from the fast-pace of the city, leaving the characters trapped together with nothing to do but interact. Admittedly, this does feel a bit excessive at times. Weddings are places where all family and friends congregate, but the efforts to force characters to speak to each other feels artificial at times. With the exception of Bebe, the passive aggressive, untalented makeup artist, there are no wedding guests. All of Desi’s groomsmen are the main characters with the exception of a new character thrown is as his equally pretentious, hippy best friend. This focus on the friend group becomes a bit too obvious, squeezing everyone the writer can think of into single shots.

Change and continuity in behavior is an important factor in this episode. Shoshanna and Marnie remain true to their vain and unrelaxed personalities, respectively. Frankly, although I enjoy Lena Dunham’s overall talent in creating this show, she tends to write her own character, Hannah, as excessively selfish to the point of nonsense. In a way, I suppose that this how audiences are supposed to feel, but her lack of support and cooperation through the wedding borders on a lack of realism.

Jessa, surprisingly, emerges as a very new and exciting character in this episode. In the end of the episode it is her optimism and efforts that save the day. When the entire day turns to misery she emerges with a smile and none of her usual snarky quips. Without her, the show’s fade out ending to a positive song about love would’ve seemed tongue in cheek instead of as hopeful as it did. Jessa is not the punch her ex-husband in the face type person audiences have come to expect. Her joy is obvious but the vulnerability that comes with it is less obvious. Especially in her romantic scene with Adam, she is depicted without confidence and control for the first time. Susceptibility to happiness must come with fear. Adam, at least around Jessa, returns to his creepily whimsical style of flirtation. This was a refreshing choice. Considering the fact that Kylo Ren remains fresh in most minds, a reversion to his old ways is an effective assertion of where Adam Driver’s roots lay.

Whilst most characters duck into secluded spaces for their moments of emotional expression. Hannah and Fran are confined to the front seat of a car and Adam and Jessa find some privacy in an empty garden. One character, however, is constantly in the center of the action while going unnoticed, Ray. Ray is the unexpected people’s champion. His grumpy, cynical demeanor hides his true concern for the wellbeing of others. This trait leaves mourning the loss of Marnie to another man through the course of the episode. His scenes are the highlights of the episode, from his woeful monologue to Fran over Marnie to his dive into the lake. He is an opportunist, and his talk to Desi when he starts to get cold feet makes it hilariously unclear if he’s trying to break them up or put them together. Ultimately, his actions keep the storyline together, tying together every character in one form or another.

Although not the most incredible episode of the series, it is certainly entertaining and memorable. Season four’s conclusion required the tying off of a lot of loose ends. Most were addressed in some form or another, but it certainly left more to be desired. In this case, that is a very good thing. I was left yearning for what is to come next and curious about what I missed during those seven months that changed these characters so much.