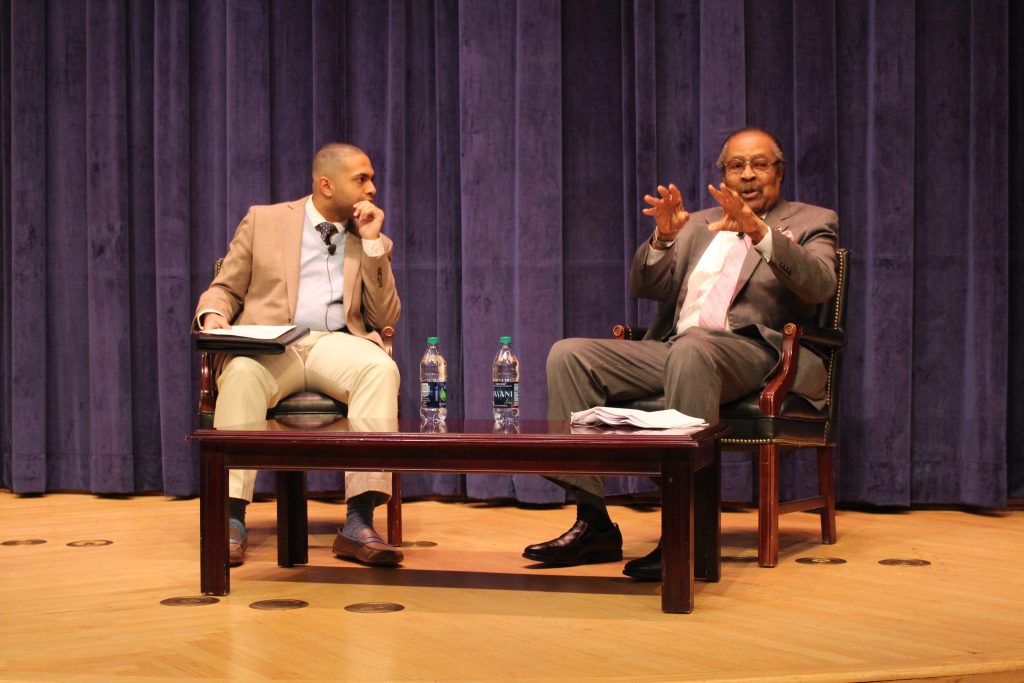 Clarence Jones, a former advisor and trusted confidant to the late Dr. Martin Luther King, Jr., discussed the past and present of the Civil Rights movement with Georgetown students in the ICC auditorium on Feb. 25. After serving in the Korean War, Jones was a critical legal advisor to Dr. King and helped draft the famous “I Have A Dream” speech. He later became the first African American partner on Wall Street and currently is a Scholar-in-Residence at Stanford University.

Lecture Fund associate board member Chris Wadibia believes Jones’ speech dovetails with the Fund’s goals of promoting dialogue on topical issues to promote interpersonal learning, and also is a fitting contribution to Georgetown’s ongoing celebration of Black History Month. Wadibia saw the presence of Jones, quite literally a father of the Civil Rights movement, as a meaningful event for all members of the Georgetown community. “Dialogue is who we [the Lecture Fund] are,” said Wadibia,  “but bringing people together–that is what we do.”

The event itself began poignantly, as Jones sang a rendition of “Woke Up This Morning,” a gospel-influenced freedom song. Jones reflected on his personal history with Dr. King and offered his thoughts on current civil rights and social justice issues in the United States. Jones praised King, describing his skill as a writer and orator; in Jones’ words, King was “the preeminent apostle” of nonviolent protest in the United States, and his actions played a large goal in ending “American apartheid.”

Jones also devoted a significant portion of his speech to contemporary issues. He quoted the Pulitzer Prize-winning author Isabel Wilkerson – whose works include the 2010 The Warmth of Other Suns – and asserted that by celebrating the actions of Dr. King and his contemporaries without considering current civil rights issues, the American public is essentially “cheering at halftime” of the national effort to eliminate the “virus of racism.”

Jones described interpersonal gun violence and the excessive use of deadly force by United States police forces as the major issues facing contemporary African American communities. Emphasis was placed on the problem of increasing gun ownership in the United States. According to Jones, Americans own three hundred million guns, and the average number of firearms owned per individual has increased from 4.1 in 1994 to eight in 2015.

Jones also focused on contemporary income inequality and the recent striking down of the Voting Rights Act of 1965 as sources of injustice in the United States. The continued existence of homelessness in the United States, especially in light of the country’s world-leading GDP and the wealth of regions such as Silicon Valley, Jones asserted, speaks to the need for a “new paradigm” of national ethics and morality. Additionally, Jones criticized the Supreme Court’s 2013 nullification of section IV of the Voting Rights Act in Shelby County vs. Holder as an act that reduced the powers of minority communities to enact real social change and justice.

After the conclusion of the speech, Wadibia conducted a brief interview with Jones. Jones speculated that had he never met Dr. King, he could still have lived a comfortable life full of wealth and security. However, in the same breath, Jones emphasized that living a life without King and Civil Rights movement would have been abjectly amoral; working with Dr. King in the 1960s caused Jones to find a new focus for his time and energies. Jones also emphasized his sense of duty to share Dr. King’s story and message and to support the ongoing Civil Rights movement, quoting an African proverb which states “If the surviving lions don’t tell their stories, the hunters will get all the credit.”

Jones also briefly addressed his experience on Wall Street. While he did speak fondly of his career in finance, he also noted and criticized the lack of diversity at the highest levels of banking, government, and law in the United States–fields which are predominantly still the province of white men. This observation provided a segue for Jones to reemphasize the importance of voting as a tool by which historically marginalized communities, including women, African Americans, and Latinos, can accrue legitimate power.

Jones then fielded a series of questions from the audience of students in attendance. With regards to the contemporary Black Lives Matter movement, Jones offered his support for protesters, but again emphasized the importance of voting in conjunction with protesting as a vehicle for effecting justice and reform. Jones acknowledged that contemporary social movements must strive to integrate more distinct communities, such as the Asian American community and the Latino community, into efforts that have historically been centered on the African American community.

When asked to further discuss his time spent working with Dr. King in the 1960s, Jones recounted his experience of physically smuggling paper into an Alabama prison so that Dr. King could write his iconic “Letter from Birmingham Jail.” Jones emphasized the historical importance of this piece public social discourse; the “Letter,” Jones emphasized, was perhaps Dr. King’s most powerful piece of writing, and a definitive “twentieth century social justice manifesto.”