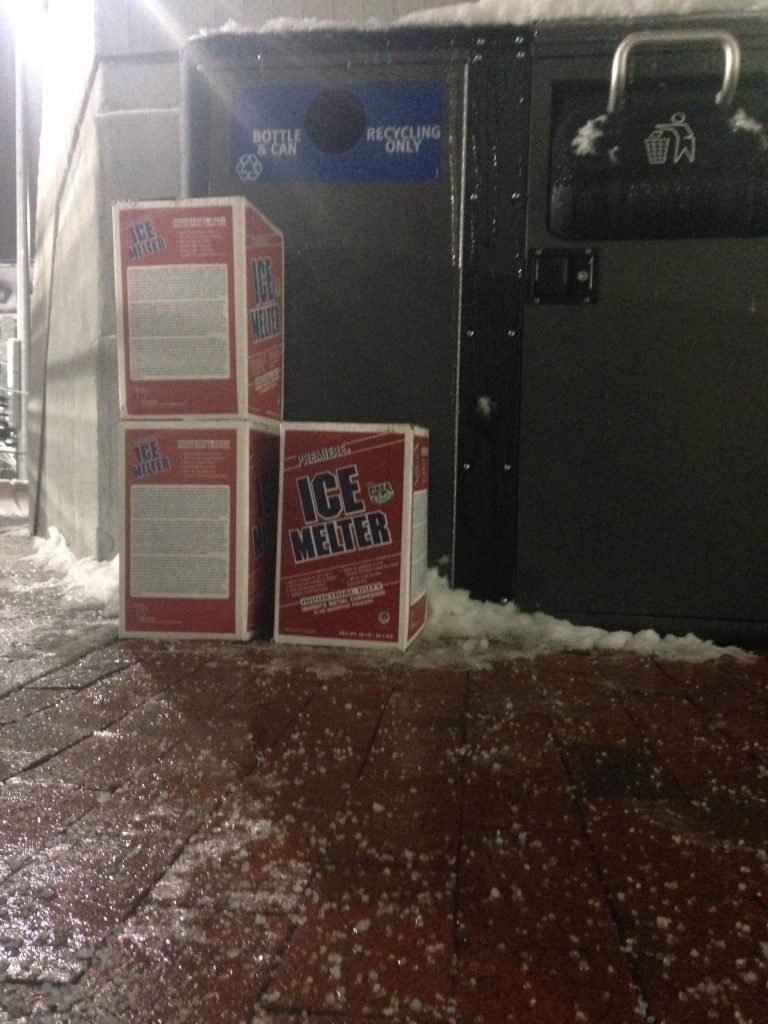 University Planning and Facilities Management had its hands full keeping Georgetown’s sidewalks and streets clear and free of ice as record snow hit the District in January. University employees worked to scatter ice-melter products around campus, a practice the EPA, among other organizations, has suggested can be detrimental to the environment. Georgetown appears to have actively sought to lessen the environmental impact of its response to snow and ice, though it is unclear whether further sustainable practices could be pursued in the future.

Runoff from ice-melting products has negative effects on bodies of water and their endemic organisms. According to Smithsonian magazine, high concentrations of chloride, a component in many ice-melting products, “are harmful to most freshwater aquatic organisms—because these high levels interfere with how animals regulate the uptake of salt into their bodies… A range of studies has found that chloride from road salt can negatively impact the survival rates of crustaceans, amphibians such as salamanders and frogs, fish, plants and other organisms.”

The District of Columbia Department of Energy and the Environment (DOEE) acknowledges the potential environmental impact of removing ice from city streets and walkways. The DOEE’s online report on “Ice Removal Best Practices” notes that “During the spring thaw, two thirds of the District’s land will drain snow melt directly into Rock Creek and Anacostia and Potomac Rivers with little or no treatment.” These pollutants contribute to making our waterways unsafe to fish or swim in.” The same report goes on to advocate moderate use of ice-melting products, the use of ice chippers in the place of chemicals, and also offers a list of melting products that meet the EPA’s “Safer Choice Standard,” and are less impactful on humans and the environment.

This list includes Premiere Ice Melter, a product manufactured by CP Industries of Salt Lake City, UT, and which was used by University Planning and Facilities Management during the recent blizzard. Per the manufacturer’s website, this product is less damaging to plants, metal, and concrete, though the impact of the product on bodies of water is not mentioned. Worryingly, a list of ingredients in Premiere Ice Melter is not provided on the CP Industries website. Furthermore, CP Industries itself is designated as “overdue for an audit” by the EPA’s website.

The use of this product is apparently a calculated risk. According to Robin Morey, Georgetown’s Vice President for Planning and Facilities Management, Georgetown’s primary deicing product, Premiere Ice Melter, “is made from a salt blend including Calcium Magnesium Acetate (CMA), a more environmentally friendly alternative to conventional NaCl road salt.” The use of different chemical mixes could have adverse public safety ramifications; Morey said that “the use of 100 percent CMA would significantly reduce the safety benefit by only reducing the freezing point by one-third that of conventional road salt.”

Questions also remain  as to whether Georgetown could pursue more environmentally friendly ice-melting practices beyond the scope of products used. Smithsonian magazine notes that “Mixing… salt with slight amounts of water allows it to spread more” while  “blending in sand or gravel lets it to stick more easily and improve traction,” and adds that mixing various organic juices and brines with melting products can “reduce the overall chloride load on the environment.”

According to Morey, the university emphasizes “pre-treating… surfaces with a brine solution, which has been shown to reduce the amount of salt needed by up to 25 percent, ensuring the proper calibration and operation of  deicing equipment and shoveling early and often to obviate the need to apply product until necessary.” Use of sand, however, might be counter-productive to other university environmental goals–Morey mentions that “use of sand will clog the pores and joints of the porous pavement that has been installed to reduce stormwater pollution.”

When it comes to melting ice, Georgetown must weigh many various public safety goals in addition to the environmental impact of facilities practices. According to Morey, “we constantly consider and evaluate the use of products in our supply chain to minimize any negative impact on the environment.” The current use of deicer products, then, represents a kind of balancing act.