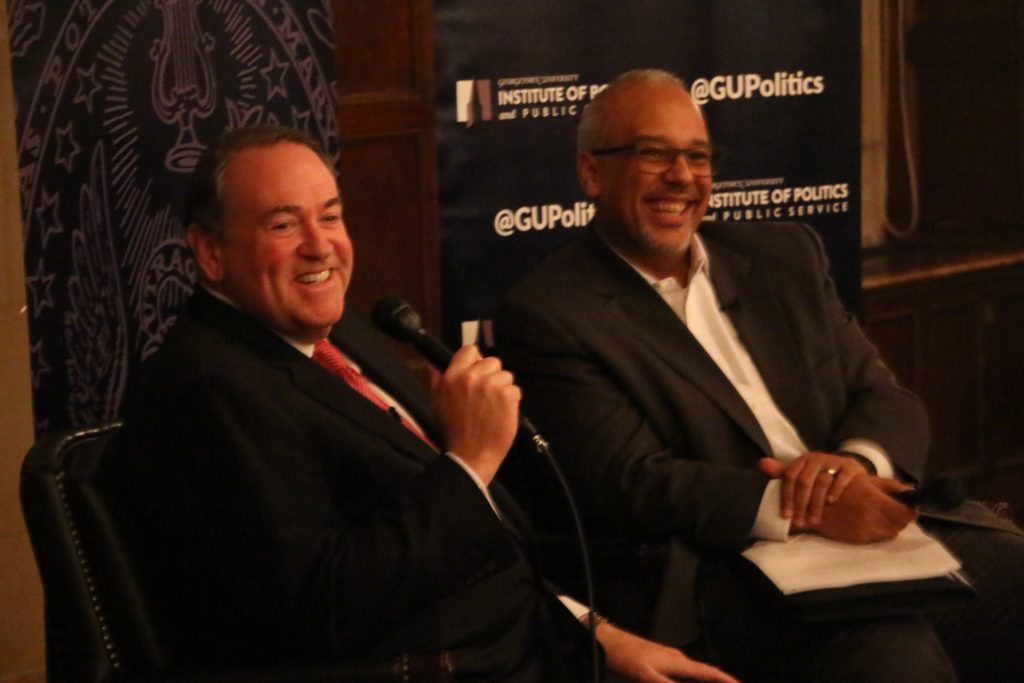 Gov. Mike Huckabee, two-time Republican presidential hopeful and the 44th Governor of Arkansas, gave a retrospective on his political career and his 2016 campaign to Georgetown students on Wed., March 3. Huckabee is slated to be the first of several former 2016 presidential hopefuls to speak at Georgetown as part of “Reflections on Running,” a series put on by the Georgetown Institute for Politics and Public Service (IPPS).

IPPS Executive Director Mo Elleithee moderated the discussion, and began by asking Huckabee to reflect on his career in the Arkansas state legislature. Huckabee recalled encountering an abjectly hostile environment when he first began working in 1993 as a Republican Lieutenant governor in a predominantly Democratic state.

“When I was elected lieutenant governor, the door to my office at the Capitol was nailed shut, and that was my welcome,” he said. “It was a very vicious environment, and all the furniture was taken out of my office. My office stayed nailed shut, by the way, for fifty nine days.” However, Huckabee looked back on this animosity with some fondness, arguing that his measured response to hostility endeared him to the public. “People appreciated that I didn’t go and try to tear the door down,” he said, ”I didn’t act in the same way in which I was welcomed.”

Huckabee went on to discuss his time as a Baptist minister in Arkansas. In particular, Huckabee addressed criticism that working as a minister was an experience that disconnected him from reality. “Frankly, no one is more steeped in reality than the pastor of a large congregation.” Huckabee listed debilitating health issues, teenage pregnancy, and drug addiction as issues he’d encountered among members of his congregation. “You see every aspect of human life in a way nobody else really does … that made me realize that a lot of the people who were dealing with public policy to supposedly fix problems didn’t even understand the nature of the problems they were trying to fix.”

The former governor asserted that his presidential ambitions were motivated by a frustration with an ineffectual and gridlocked Washington, especially in light of his career in Arkansas, “a state in which I went into a very difficult hostile political environment but was able to effectively and successfully govern for ten and a half years.”

Huckabee then recounted his win in the 2008 Iowa caucus. This victory, Huckabee recalled, was fundamentally the product of old-school campaign tactics; “we were terribly outspent, but it was a state where you just couldn’t buy it because you had $50 million of advertising for your budget.” Huckabee also argued that the public narrative about his support from the Evangelical Christian community was somewhat exaggerated. “Truth is, evangelicals are not a monolithic vote,” he said. “My voting bloc was more a voting bloc of working-class people than it was of evangelicals. ”

Campaigning for president, Huckabee asserted, exposed him to unpleasant trends of profound inequality within the Republican Party. “I do think that there is a great divide between many people in what I call the ‘ruling class’ and what the ‘ruling class’ considers to be the ‘great unwashed,’” he said. “I feel like sometimes that there’s just a real sense of not appreciating that that’s what made America a great country.”

The discussion then turned to the 2016 election. Huckabee emphasized that his belief “that the Republican ruling class was increasingly disconnected from the reality of what was happening to most Americans,” was the driving force behind his 2016 campaign. This campaign, Huckabee asserted, was noticeably different from the 2008 contest, at least in part because of the presence of superPACs. “Eight years ago, if you were a candidate, the money came to you and your campaign, you had to at least stand up for your message and be held accountable for it, now a candidate really is divorced from a lot of the messaging,” he said. Additionally, Huckabee criticized the imbalance of media attention in the political process. “Donald Trump got 568 minutes of airtime in a two week period. I got 17 seconds … that’s a manipulation of the process, unfortunately,” he said.

“The voters this year are not just angry,” said Huckabee, “we are in the midst of a …retaliation [against] a government that has been utterly blind to…what’s happened to people out there in the rest of the country.” Huckabee freely admitted that these statements were not dissimilar to those made by Senator Bernie Sanders, though he did qualify this statement, saying that “we have diagnosed the disease pretty much the same way…I would like to think that my approach to treating this illness is really more the approach of a neurosurgeon, his is a witch doctor’s…I disagree with his prescriptions but I don’t disagree with his diagnosis – the system is rigged.”

Students then had the opportunity to ask questions to the former governor. When asked what he would have done in Washington if he had ever been elected president, Huckabee stressed the need for bipartisan cooperation, noting that “Bill Clinton was very good at this, he understood the nature of the job, and that is that you can say your piece, but if you really want to accomplish something, achieve something, you don’t demonize the other side publicly. You bring them into a room and you listen, and you talk, and you take the easiest things first–you find common ground and you start building trust, and it takes time.”

Huckabee was also asked whether a need for reform exists regarding the influence of money on politics. The former governor responded that ideally, the political system would be more transparent with regards to candidate funding. “If you [the donor] want to give a billion dollars to a candidate, do it! Disclose it so everybody knows you’re [the politician] a wholly-owned subsidiary of the donor, but at least people knows who’s pulling your strings.”