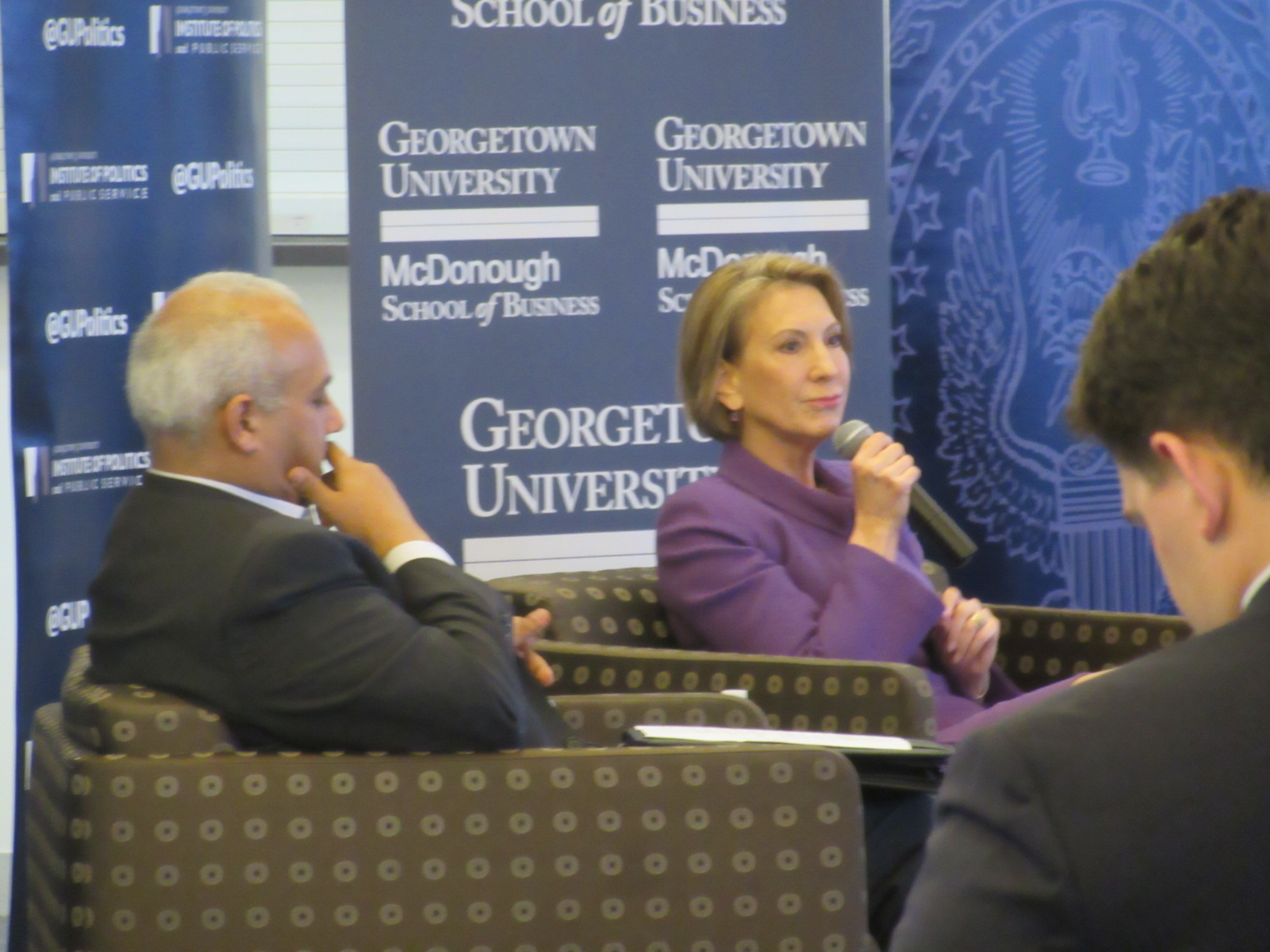 Carly Fiorina speaks with Mo Elleithee in the second of the Institute for Politics and Public Service's "Reflections on Running" events. / Photo: Margaret Gach

Former Hewlett-Packard CEO and 2016 presidential candidate Carly Fiorina discussed the trials and triumphs of her campaign journey with a crowd of more than two hundred Georgetown students on Monday, March 14.

Moderator Mo Elleithee, executive director of the Georgetown Institute of Politics and Public Service, guided the conversation towards both personal and political issues, touching on her struggles with cancer and the death of her daughter, as well as the impacts of being a political “outsider” in the Republican presidential race from which she withdrew in February. 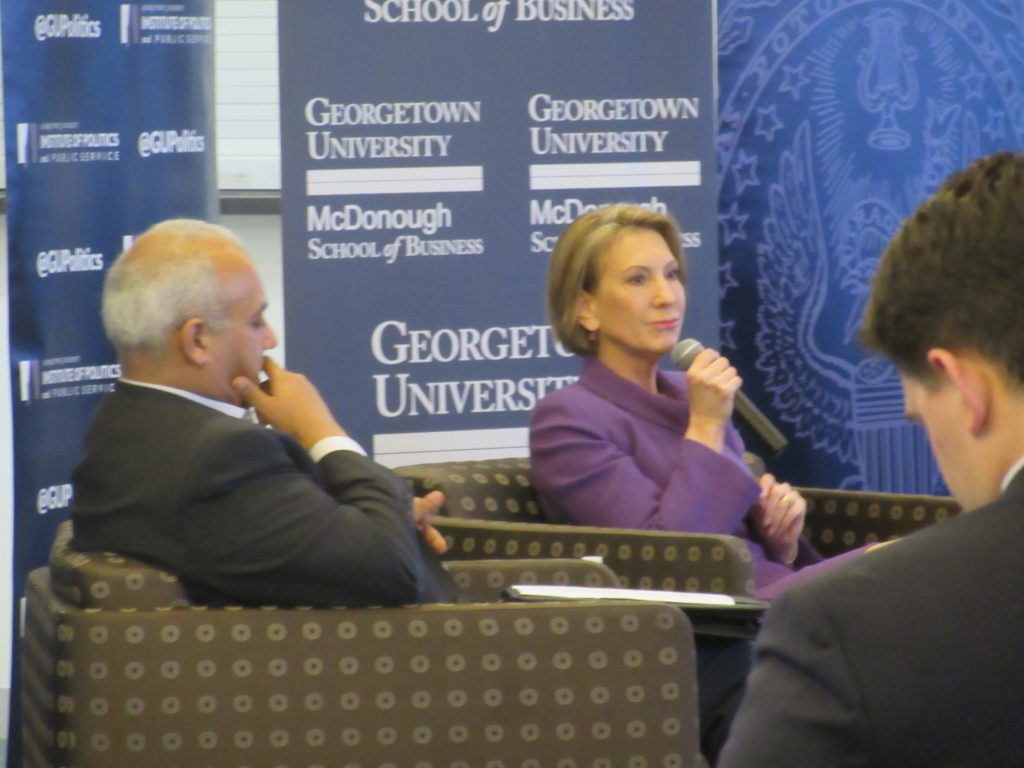 In regards to her unsuccessful 2010 run for the US Senate in California, Fiorina explained how she had to push through both breast cancer as well as face the loss of her daughter to the “demons of addiction” right before she announced her campaign.

“Honestly, the only thing that got me through that was my faith and my family, and getting out on the campaign trail and meeting so many people, many of whom were also struggling with deeply difficult circumstances,” said Fiorina. “In a way, talking with those people was actually helpful.”

Elleithee then steered the conversation towards Fiorina’s most recent foray into the political world: the Republican race for the 2016 presidential nomination. When asked what her main motivation for joining the race was, Fiorina emphasized her belief that the government should be made of citizens, not of a class of political elite and incumbents.

“Power concentrated in the hands of too few is always dangerous because people abuse it,” Fiorina said. “You [students] are growing up in a generation where the technology in your hand gives you unprecedented, historic power. You are empowered with technology and education which should make a citizen government easier, not harder. And yet we’re moving further and further away from a citizen government and more and more [economic and political] power is getting collected in the hands of very few people.”

Fiorina described how she started from “ground zero” in her campaign, mentioning that her name had only 4% national recognition before her first debate.

“The system favors the system,” she said. “The status quo has limitless power, because the people who have benefitted from the system now preserve it; so, it is always hard to challenge the system. But in the end, challenging the system is how you make a positive contribution.”

Elleithee also addressed two other challenges that Fiorina  encountered during her ten-month presidential campaign, being the only woman in the Republican field and facing current GOP frontrunner Donald Trump.

Fiorina acknowledged that her physical appearance, especially during the debates, was scrutinized much more than her male opponents, citing an example of one of her aides being asked by a senior political correspondent what designer Fiorina’s shoes were before any other question in a post-debate spin room. Likening her political experience to her business experience, Fiorina said that women often face unique challenges from men, but she qualified those experiences as the only kind she had ever known.

“The truth is, I’ve never been a man,” said Fiorina. “So on one hand I don’t know what it’s like to be a man, but the aspects of leadership that matter if you want to make a difference are not based on gender. The highest quality of a leader is to unlock potential in others.”

Elleithee pointed out that one of the most public instances of criticism of Fiorina’s appearance came from Donald Trump, who asked who would vote for “that [Fiorina’s] face.” Fiorina minced no words in her disapproval of Trump and received a round of applause for her statement.

She went on to explain that she is stumping for Ted Cruz not only because of his constitutional conservatism, but also because she thought Cruz is the best chance for Republicans to keep Trump away from the nomination.

“I don’t always agree with [Cruz’s] tactics, but I do agree with his goals,” said Fiorina. “And I am campaigning for Ted Cruz [because] he’s the only one who can beat Donald Trump.” 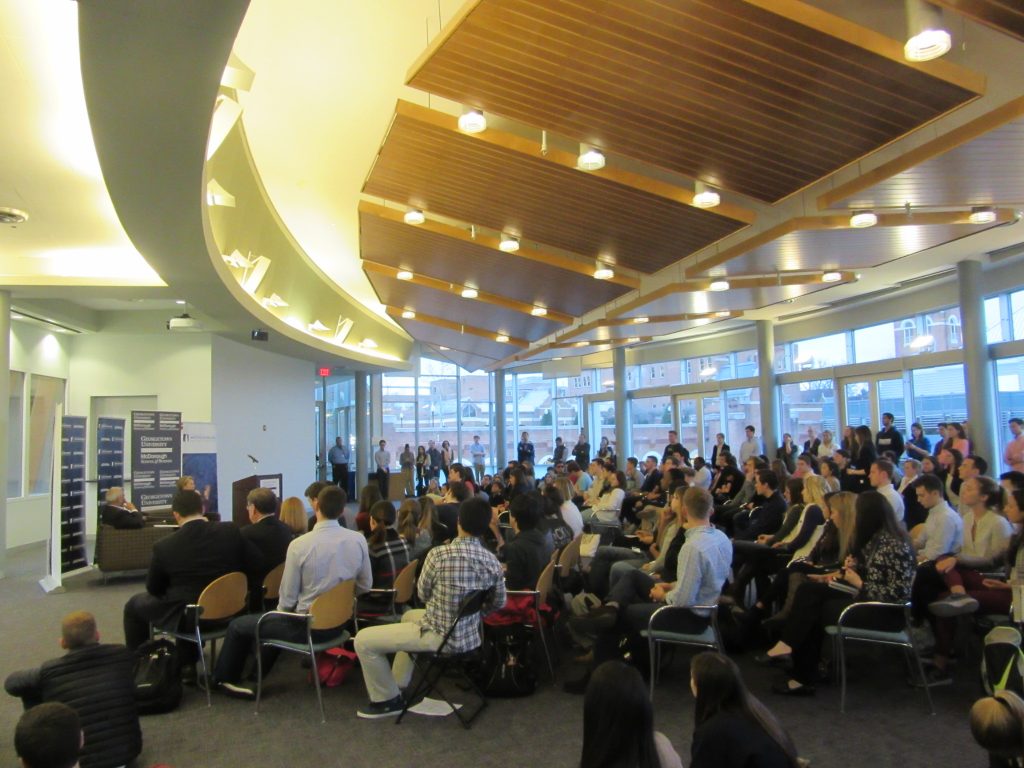 Fiorina was able to take a few questions from students near the end of the hour-long event. They ranged from career advice to foreign policy. Fiorina cautioned against entering a purely political realm before getting real-world experience and acknowledged Georgetown students’ ambition and high expectations.

“I say this to the women in the room, and to everyone: do not other people define you,” said Fiorina. “Do not let other people tell you what you should do, what you can do. You decide what you’re made of, and I guarantee you that every single person in this room has far more potential than you realize. So take chances, take risks, because that’s the only way you find out what you’re made of.”

By Maya Kominsky and Annabella Hoge