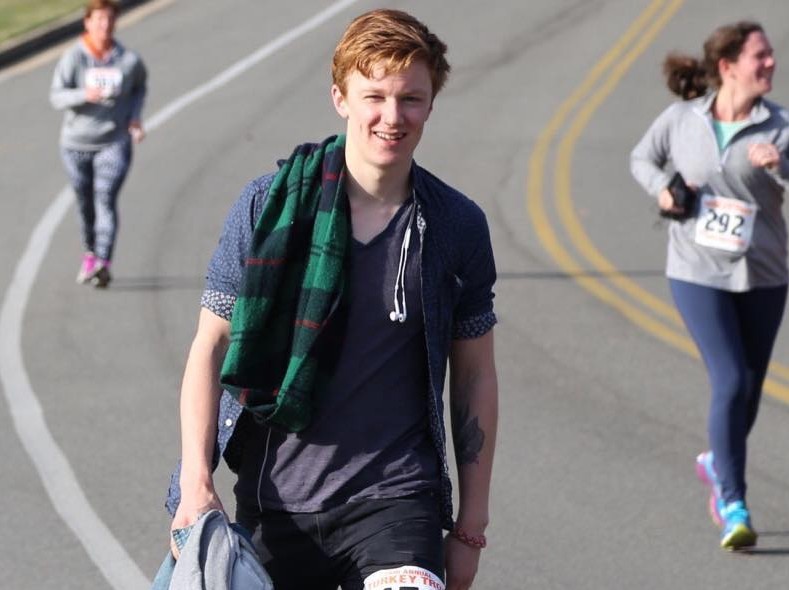 Dahlgren Chapel was filled with a standing-room only crowd on Thursday afternoon as the Georgetown community gathered to honor the life of Nathan Kittredge “Kitt” Rom (SFS ’19). Rom,19, died in a skiing accident at Copper Mountain in Summit County, Colo., on March 9 over spring break, while on vacation with his family. Rom’s untimely death was mourned by numerous members of the Georgetown community; while his time here was short, Kitt had succeeded in integrating himself with several organizations and groups on the Hilltop.

Those who knew Rom well described him as an unequivocally positive influence on their lives. “His presence was just so heartwarming whenever he’d give me a hug, or tell the floor an incredible story of his travels, or even just quietly sit in the room with his friendly smile,” reflected Hannah Rancap (MSB ‘19), who lived on the same Darnall floor as Rom. Grant Olson (COL ‘19), another Darnall resident, recalled that within the naturally close-knit Darnall community, “Every single person had a time when they had to rely on him, and he delivered,” often by brewing coffee to help with exams, papers, and all-nighters.

Rom’s friends also emphasized his optimistic, unreserved, and free-spirited approach to life. “I came to admire how he lived in this world,” said Camille Hankel (COL ‘18), one of Rom’s boxing club teammates. “He did not walk through life with his head down, going from day to day with the motions of a comfortable routine, like it is so easy to do. Rather, he was willing to be thoughtful, to be critical, to reflect on a larger scale,” she said. “I will never forget Kitt’s ability to squeeze every possible moment out of the life he was given,” reflected Joey Stabile (SFS ‘19), who also lived in Darnall with Rom. “He took nothing for granted, and made the most of everything.”

The official University announcement of Rom’s death noted that Rom “lived adventurously.” Rom had graduated from high school in 2014, but travelled for a year before arriving at Georgetown, “during which he picked grapes in Italy, backpacked across the U.K., and worked as a barista in Sydney, Australia.” Yet Rom did not let these experiences go to his head; he was “someone who could have gone on for days talking about all of the incredible things that he has experienced and accomplished,” said Stabile, “but he never did. Kitt was the most humble person.”

Westword, a Denver-based news magazine, described Rom as “an extraordinarily bright young man.” According to the website of his high school, Bishop O’Connell High School in Arlington, Va.A, Rom achieved a perfect score on the SAT in 2013. Moreover, Georgetown’s official announcement of Rom’s  death described him as a talented student with a passion for physics, who was involved with the Science, Technology, and International Affairs major within the SFS. “I will always admire his intellectual brilliance,” said Stabile, who also emphasized Rom’s “genuine respect for others.”

The speakers agreed with the University’s statement that Rom was devoted to “brewing excellent coffee,” and mentioned that he had gone so far as to have a coffee plant tattooed on his forearm. Rom’s fascination with coffee was compounded by a deeper interest in craftsmanship, attention to detail and jobs done well. Rom did not just brew coffee – he also worked to understand the complex espresso machinery used at Saxby’s and even dabbled in pottery by making his own mugs.

Rom is survived by his father, Mark, his brother Chris, and his mother.

The University notes that “In lieu of flowers, Rom’s family has requested that donations be made in Rom’s name to the Georgetown Scholarship Program Necessity Fund.” Georgetown administration also emphasized that University Counselling and Psychiatric Services (CAPS), Campus Ministry, and the Faculty and Staff Assistance Program are available as resources for members of the Georgetown community looking to cope with the impact of Rom’s passing. Rom’s funeral will take place at 1:00 p.m. on March 24, at Lutheran Church of the Redeemer in McLean, Va., and transportation is to be provided from campus.

Editor’s Note: An error with regards to Hannah Rancap’s school has been corrected. Rancap is in the McDonough Business School Class of 2019, not the College Class of 2019. The article has also been updated to clarify speeches made at the memorial service.