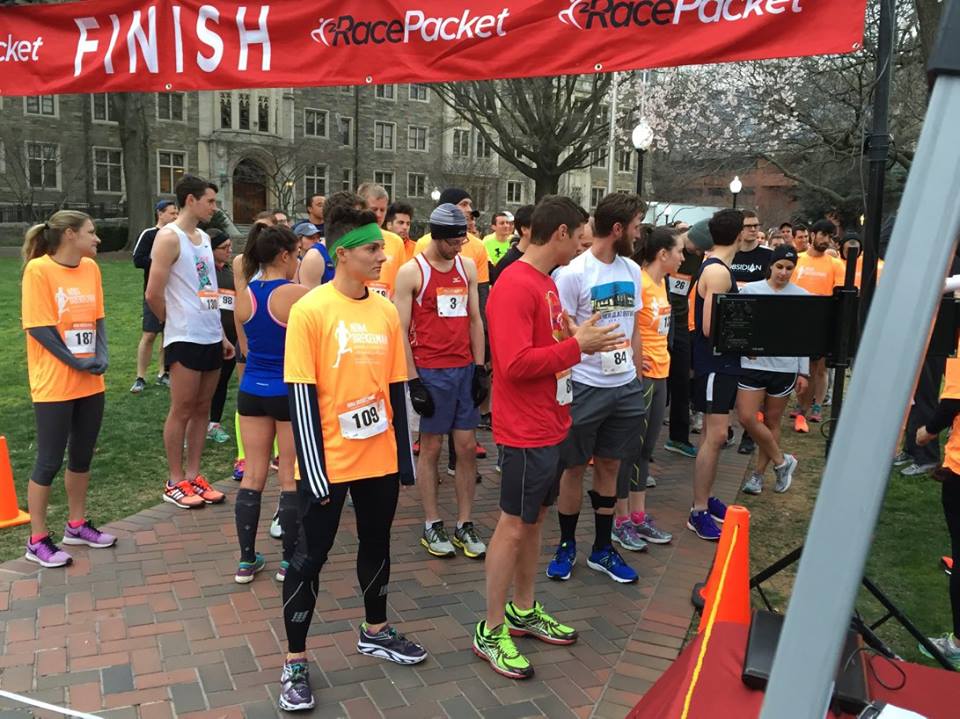 The space around Healy Lawn and Red Square was unusually busy on the morning of March 19, as approximately two hundred runners gathered to participate in the Nina Brekelmans Memorial Scholarship 5K. Brekelmans (MSFS ‘15), who graduated from the School of Foreign Service with a Master’s degree in Arab Studies in 2015, was killed in a house fire in Dupont circle shortly after graduation.

The race itself served as a memorial for Brekelmans, an avid runner who had walked on to the cross country team as an undergraduate at Dartmouth and competed with the Georgetown Running Club (GRC), a club team for former collegiate runners based in the DMV area. The race also represented a successful effort to raise funds to carry out Brekelmans’ visions and goals as a student. According to the official website for the race, “the nearly $10,000 raised through the race will be donated towards the Nina Brekelmans Memorial Endowed Scholarship Fund at Georgetown University, preserving Nina’s legacy of goodwill and women’s empowerment in the Middle East.”

According to Mary Grace Pellegrini, a GRC member who also attended the same high school as Brekelmans in Louisville, Ky., the race was the end product of a long planning process. “We started talking about organizing the race really right after the incident, and probably around September, we started the groundwork of making this all a reality,” said Pellegrini. Several University entities collaborated with the GRC in the organization of the race; Pellegrini stated that “Georgetown has been immensely supportive of Nina’s legacy initiatives, and this race especially,” and stressed the involvement of the Center for Contemporary Arab Studies (CCAS) and the School of Foreign Service.

The race course ran through the heart of Georgetown’s campus, past Lauinger Library, O’Donovan Hall, the Southwest Quad, and the new John R. Thompson Intercollegiate Athletics Center. Runners then exited Georgetown’s campus, and crossed Canal Road to access the Capital Crescent trail towpath, before retracing their steps back to Georgetown. Philip Royer and Hannah Rowe won the men’s and women’s divisions of the race, respectively; the two were former teammates of Brekelmans at Dartmouth. Royer and Rowe also competed with Brekelmans as members of the GRC.

Jerry Alexander, the GRC coach, recalled Brekelmans’ involvement in his program at the race’s conclusion. Alexander remembered Brekelmans as “determined, ambitious, joyous, but most of all, passionate. Nina was not the most talented runner on our team, but she had a level of passion and desire that was truly exceptional.” Alexander then added that the GRC had created an annual team award recognizing athletes who are both passionate about their sport and involved in community service. Additionally, Alexander announced that the newest edition of the GRC team uniforms would incorporate a memorial patch for Brekelmans.

SFS Dean Joel Hellman also reflected on Brekelmans, her legacy, and her place in the Georgetown community after the race. As a relative newcomer to the SFS, Hellman said that “One thing that I have been surprised to see, deeply pleased to see, is how strong the sense of community is here at Georgetown.”

“The sense of community pervades Georgetown at all times bringing us all together,” Hellman added, “but certainly in moments of tragedy and moments of loss, we see the strength and the depth of Georgetown’s community.” Hellman praised Brekelmans as a “perfect example” of the SFS values of “looking outward, engaging outward.”

Hellman also welcomed Brekelmans’ parents, who had travelled to campus from Shanghai in order to attend the race. The new endowed scholarship in their daughter’s name, he noted, would be a welcome addition to Georgetown, as it would allow future students in the CCAS “to continue the kind of work that Nina herself was doing.”

Pellegrini elaborated on this theme, sharing that Brekelmans’ friends and family “hope to preserve” her devotion to of service, academic excellence, and women’s empowerment  “with her endowed scholarship at Georgetown, with this race today, and with a girls running camp that we’ve started in Amman, [Jordan].” The camp itself, Pellegrini added, is the product of Brekelmans’ Fulbright grant, and is currently being operated by members of that organization. “the way the camp became a reality is because the Fulbright program established a community service project.”

Pellegrini concluded the morning’s events by discussing Brekelmans’ continuing legacy. Pellegrini recalled Brekelmans as an exceptionally generous individual. “She had the ability to sit with someone and make them feel like they were the most important person in the conversation…she gave so much of herself to others…to help others with really not asking anything in return.” Ultimately, Brekelmans was remembered by Pellegrini as “a kind soul and a global citizen,” with a “steadfast sense of purpose, and a humble confidence in her interests and abilities,” who was a “loyal and dear friend.”