Barnes and Noble: Hoya quarterback throws for 4 TD’s in opening win against Davidson 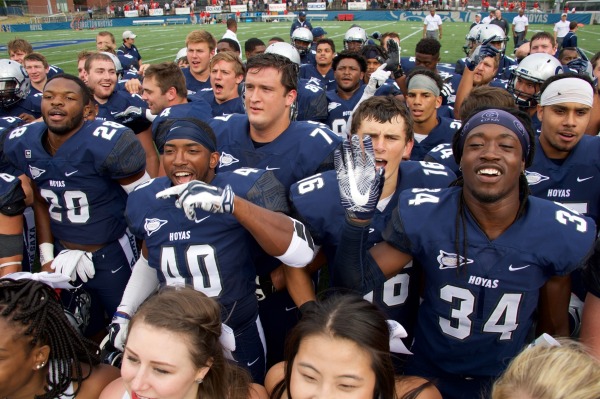 It’s a new year here on the hilltop, and that means there are a lot of changes happening on campus. Among other things, the bookstore in the Leavey Center is under new leadership, and the Georgetown football team has a new quarterback. Although seemingly unrelated, these two changes have something in common: they’re both named Barnes, and they’re both providing great reads here at Georgetown.

While only time will tell if the new Barnes and Noble-led bookstore will be an improvement, the Georgetown University football team (1-0, Patriot League), under the leadership of senior quarterback Tim Barnes, dominated Davidson (0-1, Pioneer Football League) by a score of 38-14 in the season opener at Cooper Field. The game marked Barnes’ second career start for the Hoyas, and he did not disappoint. After a nervous start which included an overthrown pass and an interception, Barnes quickly regained his confidence and went 25-for-33 passing for 221 yards and four touchdowns, along with the early interception. Barnes’ attributed much of his standout performance to the work of his offensive line, which did not allow a sack all game.

“[The offensive line] played awesome,” Barnes commented. “I had plenty of time back there [in the pocket] for the receivers to get open.”

Although the Blue and Gray were able to come up with a 24-point victory yesterday, much of this domination came in the second half. Georgetown opened up the scoring when Barnes completed an 18-yard touchdown pass to senior wide receiver Justin Hill at the beginning of the second quarter. Davidson responded later in the half, when freshman Stockton Mcguire replaced junior Taylor Mitchell at quarterback and threw a 56-yard touchdown pass to junior wide receiver Jaris Scott. That score made it a 10-7 game with Georgetown in the lead, but the game would never be close again.

With less than two minutes left in the half, Georgetown drove 81 yards down the field and scored a touchdown on a 2-yard pass to Hill, the second touchdown connection of the day for Barnes and Hill, making it a 17-7 game at halftime. When the second half started, it was all Hoyas from that point on, as Barnes and his offense put up 21 unanswered points in the third quarter point to cement a victory in week one.

A key component of those three third quarter touchdown drives was execution on turnovers and in the redzone. The Blue and Gray defense, under the leadership of junior captain David Akere, was able to come up with two interceptions and a fumble recovery. Sophomore linebacker J’V’on Butler also bolstered the defensive play for the Hoyas, totaling 4.5 tackles, 1.5 of which were for a loss.

“[Butler] is a good player,” Head Coach Rob Sgarlata said. “He is one of those kids that is physical enough to hold the edges but is also really good in coverage.”

“We talk about coming away with points but trying to come away with touchdowns,” Sgarlata said. “Those are money downs. You have to cash in when you’re down [in the red zone].”

Outside of Georgetown’s desire to have a statistically sound performance and get a win against Davidson, there was also an added emotional element to the importance of this game. Senior linebacker Ty Williams, who suffered a severe neck injury against St. Francis (Pa.) exactly one year ago tomorrow, served as an honorary captain and participated in the coin-flip. He received a resounding welcome back to Cooper Field.

Before the game, both Barnes and Akere, captains for the 2016 season, emphasized that Williams was like a brother to them, and that the team was playing with him in mind. While the rest of the season is still a blank book, this Georgetown team has certainly followed through for their teammate in the opening chapter.

The Hoyas will travel to Poughkeepsie, New York next Saturday, September 10 to take on Marist. Kickoff is slated for 6pm. 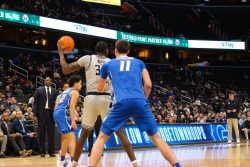