Natasha Adair: Crafting a culture of success on and off the court 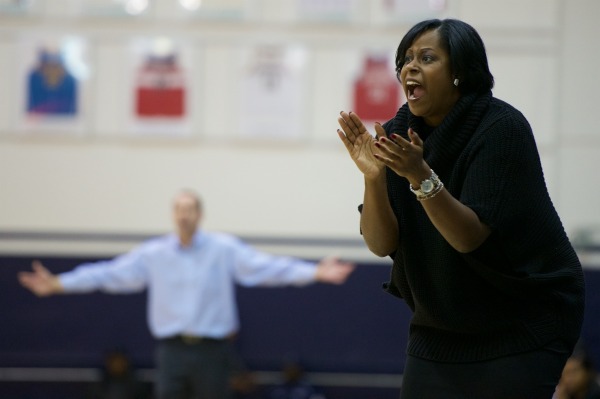 The Georgetown women’s basketball team was in need of guidance. The program had just hired its third coach in three years, and the team had not recorded a winning season since 2012. In Head Coach Natasha Adair’s first year–the 2014-2015 season–the Hoyas managed only four wins.

The reputation of the team was in shambles, and then Coach Natasha Adair began to put it all back together, piece by piece.

Things did not look easy at the onset of Adair’s tenure. In her first year, the team fell to a humiliating 4-27, which included a 2-16 record in Big East conference play. Despite the Hoyas’ difficulties during that season, Adair was able to recruit star guard Dionna White to add to the team’s core of Dorothy Adomako and Faith Woodard.

Entering Adair’s second season at the helm of the program, most observers had low expectations for the Hoyas. A small glimmer of hope existed in rising sophomore Adomako, who was named Big East Freshman of the Year the season before, but no one could have anticipated what was to come next.

The Hoyas smashed through their low ceiling and matched their previous year’s total of four wins after the first five games of the 2015-16 season. The trio of White, Adomako and Woodard played an instrumental role in turning the team around, and winning became a habit

“We had to build trust, we had to build just chemistry, consistency, and you saw last year turn, mid way through the year once we got into conference. All the things that we had been talking about, it just started making sense,” said Adair. “The lightbulb was on, they were playing more freely, they were playing relaxed, so it just translated into wins and just team camaraderie.”

They went on to finish the year at 16-14 and were eliminated from the first round of the WNIT at the buzzer against Rutgers. Despite the team’s early postseason exit, the Blue and Gray no longer found themselves at the bottom of the Big East and proved that they were ready to once again enter the national conversation.

Though the team’s improvement over two seasons was unprecedented, it should be no surprise that Coach Adair knows what it takes to run a successful basketball team; the game has followed her everywhere she has gone. In high school, Adair starred as a track and field athlete before choosing to pursue basketball. Notably, she was recruited to play basketball at the University of Connecticut by renowned coach Geno Auriemma before suffering an ACL tear during a preseason game in her junior year of high school.

Following her injury, Adair attended Pensacola Junior College, where she led the Pirates to a State Championship. After two years there, she transferred to the University of South Florida, where she finished her playing career and became one of the program’s all-time leading rebounders.

Adair graduated from USF with a communications degree, then eventually landed a job as an assistant coach at Georgetown University under Patrick Knapp, who coached the women’s basketball team from 1986 to 2004.

Adair was mainly responsible for recruiting and for assisting players with their post games as an assistant coach at both Georgetown and Wake Forest. She was given credit for helping Rebekkah Brunson, who was chosen with the 10th overall pick in the 2004 draft by the Sacramento Monarchs, and was a three-time WNBA All-Star, develop into a strong post presence.

At Wake Forest, she was given the role of recruiting coordinator and displayed her superior ability in this role. She attracted many future All-ACC players including Liz Strunk, Coteila Bond-Young, and Corrine Groves, each of whom would go on to score more than 1,000 career points. Eventually, Adair was promoted to Associate Head Coach and held that role over her last five years at Wake Forest from 2007-2012.

It was inevitable that a coach as talented and well-respected as Adair would eventually be hired as a head coach. After an eight-year stint at Wake Forest, Adair moved on to the College of Charleston and became its women’s head basketball coach. In two years at Charleston, Adair led the Cougars to a 35-31 record and reached the quarterfinals of the Women’s Basketball Invitational.

Then Georgetown came calling. Following an abysmal 11-21 season for the Hoyas under Jim Lewis, Athletic Director Lou Reed called Coach Adair, and she quickly moved from the College of Charleston to the Hilltop.

For Adair, the move to D.C. was a dream come true. The experienced coach is a DMV area native who attended nearby Albert Einstein High School in Kensington, Maryland. She had already coached for the Hoyas from 1998-2004 and was the perfect fit for a Georgetown team searching for a new identity.

As soon as she could, Adair called in two of her former players to serve as assistant coaches. Both Sarah Jenkins (COL ’05) and Melba Chambers (COL ’99) were eager to sign on to help their former coach. Chambers joined Adair after having already worked with her as an assistant at the College of Charleston. Because they used to play for Adair, the two player-turned-coaches are able to facilitate her message to the team, providing a link between coach and players.

Coach Adair not only pushes her players to become better at basketball but also to become better people. In the coach’s eyes, it is important for the team members to recognize their place in the community and to give back. While many of the team’s service projects take place during the summer, when players have more time, they also served a Thanksgiving dinner at a local church and volunteered wrapping presents before Christmas in between games last season.

The idea of participating in the community as well as working hard on the court coincides with Georgetown’s Jesuit ideal of Cura Personalis or “care for the entire person.” All Georgetown students are encouraged to help whenever they can, but Coach Adair is holding her players responsible to that mantra.

In September, Coach Adair and the team volunteered for the group So Others Might Eat, an organization that donates time and supplies to the large D.C. homeless population. In October, the Hoyas served at the National Capital Walk to End Alzheimer’s, volunteering as guides and helping to raise awareness of Alzheimer’s. They also helped out at the tenth annual Stomp Out Sickle Cell Walk.

Sickle Cell Anemia is a disease that has become a very personal issue for the team. During the walk, the Hoyas encountered a young girl, Peyton, who had been diagnosed with the disease, which mutates red blood cells. Adair noticed the girl staring at the team, bewildered, and invited her to meet the team. The players and Peyton then immediately formed a loving, strong connection.

“Now she’s our little sister, and we will adopt her in our family, and we will follow [her] progress throughout the year and beyond,” Adair said. “Peyton was in the huddle kind of giving direction, telling us what we need to do.”

Adair’s caring outlook is nothing new to the players. They recognize the passion she puts into volunteering.

“That’s such a positive thing because when we see her involved, it makes us want to get involved,” said senior guard Mykia Jones. “When you see the type of person Coach A is, you can’t help but to love her, because she’s such a wonderful person and she’s always wanting to help other people.”

Adair attributes the increase in work rate in part to the heightened volume of service to the community. “They want to get out as much as they can to give back, but also it allows them to work even harder day-to-day knowing all the good things they have here at Georgetown,” she said.

Adair might’ve sparked the team’s ongoing dedication to the community, but the players are now the ones who keep the commitment strong.

“This is a very compassionate group of young women,” Adair said. “They will come to me and say, ‘Coach, can we do this, can we do that?’ We’re heading down to Florida over the Thanksgiving break, and they’ve already said, ‘Can we go to a soup kitchen?’”

Through their continuous community projects, the Hoyas have become a team bonded by more than just the name on the front of their jerseys. Adair prides herself in creating a team that has mastered chemistry.

“You know now, in a sense, we’re here, it makes sense, we’re all on the same page, we all kind of have that one heartbeat, that mindset,” said Adair. “The trust is there. The team chemistry is amazing, and so now they’re hungry too.”

Natasha Adair makes basketball fun. One small trait about her is that she gives all of her players nicknames. “The younger Ramil, Olivia Ramil, she and I give everybody nicknames, if you stay around me long enough I’m sure I’ll give you one,” Adair joked. Among the nicknames she has handed out: “Mo’Buckets” given to freshman guard Morgan Smith and “The Big Fundamental” dispensed to Olivia Ramil herself.

The notion that this team is one unit fosters a strong sense of camaraderie, which Adair wants to use to push the team to new heights this season.

The team’s growth over the last two years can be quantified in wins, but even that doesn’t adequately represent the growth of this program. Influenced by Adair’s guidance, this team has made an impact not only on the court but also in people’s lives.

Before Adair, the women’s basketball team was broken. Only now, after two years under Adair, are the pieces finally being put back together.