On Their Way: Women’s basketball looks to build on previous success

By Alex Lewontin and Margaux Fontaine 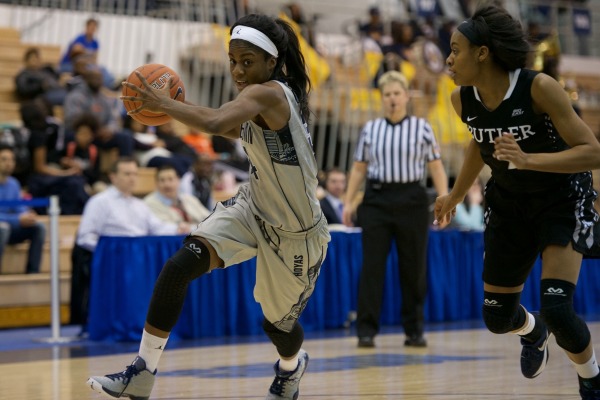 Georgetown basketball finished the 2015-16 season with a winning record and an NIT tournament berth.

No, this isn’t a glimpse into a utopian alternate universe, but the real-life story of the Georgetown women’s basketball team, which played its way to a 16-14 (9-9 Big East) record, an appearance in the quarterfinals of the Big East tournament, and a WNIT bid.

The campaign represented a marked turnaround from the team’s prior season, when Georgetown notched only four wins during head Coach Natasha Adair’s first year on the job. From the onset, it was apparent that the 2015-16 Hoyas were a different team. They leapt out to a 3-1 start, including a second-half comeback win over George Mason—a gritty performance of the type that would come to characterize the season. The team’s winning ways continued through nonconference competition, and the team entered Big East play boasting a 7-3 record, capping off their non-league play with a decisive 82-46 rout of Towson. However, with Big East conference games came shades of the team’s struggles from the previous year. The team slipped to 9-9 midway through January after a miserable 2-6 start in the Big East.

Things looked bad, but all was not lost.

“Midway through the year, once we got into conference, all the things that we had been talking about, it just started making sense,” Adair said. “The lightbulb was on [and] it just translated into wins.”

After four straight losses, Georgetown, in  another  late-game comeback, the sort that would soon become familiar to fans, topped Villanova on the road, and then the dominoes began to fall. One win turned to two, then three, and suddenly the team set their season-high streak, winning four straight before losing to No. 24 DePaul. The Hoyas split the remainder of their schedule, earning a record above .500, the fifth seed in the Big East Tournament, and a WNIT bid—their first in four years.

It was no national title, but the team had turned the tide.

Building off last year’s momentum, the team is looking to continue this upward trend into the upcoming season.

“The way the season ended last year, at Rutgers, was basically an offensive rebound putback,” Adair said. “That has fueled us, that motivates us. So everyday when we talk about what we need to do to win a Big East championship … it helps us grade the day, it helps us push one another.”

The mention of the Big East championship was not idle talk. Almost every player on the team identified it as the goal foremost in their minds. The Hoyas do not lack for ambition—but do they have the squad to match?

On paper, the team is better than last season’s. Four starters are returning: junior guard DiDi Burton, sophomore guard Dionna White, junior guard Dorothy Adomako, and senior forward Faith Woodard. Each has been working hard to improve in the offseason, and White and Adomako earned Preseason All-Big East honors. Georgetown’s crop of incoming talent, which includes three freshmen and two now-eligible transfers, will aid the versatility and depth boasted across the roster.

One question remains on everyone’s mind: who’s starting at center? At press time, it is still unclear, and when asked, Adair was tight-lipped. The graduation of forward Dominique Vitalis, the only player to start every game in 2015-16, leaves a clear vacancy, but one that the Hoyas should have the depth to fill.

Adair has options: junior center Yazmine Belk, who led the team in blocks last season despite not starting a game, and sophomore center Jodi-Marie Ramil both provide experience at the position. New talent on the roster also provides options off the bench, even in positions where the starter isn’t in question, giving the Hoyas the requisite depth and skill to play harder and faster this season.

“If you notice they all have on knee-pads, because I said that’s what we want to do: we want to rip those knee-pads up,” Adair said. “We wanna get down and go for those loose balls.” Adair has been emphasizing hustle plays, especially those that don’t bring the glory of points or stats.

Adair has thus far been successful in instilling this culture in the team, and though losing five seniors could make it hard to maintain, Adair is confident that there are plenty of voices to provide leadership. She cites Woodard and fellow seniors Tyshell King and Jade Martin as a significant source, but also White, Adomako and Burton: “What we do is by committee.”

Given the quality of the team fans should be looking forward to an exciting season. But another aspect that has encouraged student attendance at home games over the past few years have been creative promotions, the brainchild of assistant athletics director of marketing, Chris Grosse. The 2014-15 season saw the “Hail to Kale” promotion, which earned the team a shout-out from none other than First Lady Michelle Obama. Continuing the vegetable theme, 2015-16 saw “BEETS by Georgetown,” which featured a beet juice-chugging contest and free beet salads for fans in attendance.

“We love it, we love his creative juices, and the kids love it,” Adair said. “It’s those types of commitments, just through the whole department, the whole support staff, that makes us just do what we do and really enjoy it … I like kale now; I eat kale all the time now. Not beets though, not beets.”

Off the court, the team has emphasized the Georgetown spirit of Cura Personalis, volunteering their time and energy through a variety of community service and engagement programs.

“This is a very compassionate group of young women,” Adair said. “They definitely put others before themselves… they care about what other people are going through, and they want to do more. It allows them to work even harder day-to-day knowing all the good things they have here at Georgetown.”

Among those good things is the brand-new Thompson Athletic Center. The players have 24-hour access to their own practice court and weight room. Such state-of-the-art facilities are not only an incredible benefit for the team, but also come with a mandate to continue striving.

“Every time I walk in, in the front hall, in the rotunda, you see Coach [John Thompson, Jr.],” Adair said. “All of his fights, all of his hard work, all of what he stands for allows us to be here and allows me to be here. So I’m honored, but I also know we have work to do, and we won’t rest until it’s done.”

Indeed, rest will not come soon for Adair and the Hoyas. A long and difficult season awaits them, but they approach with poise, commitment, and a strong will: the tools they need to capitalize on their potential. Their first challenge will come tonight against George Washington, at 7 p.m EST, at McDonough Gymnasium.