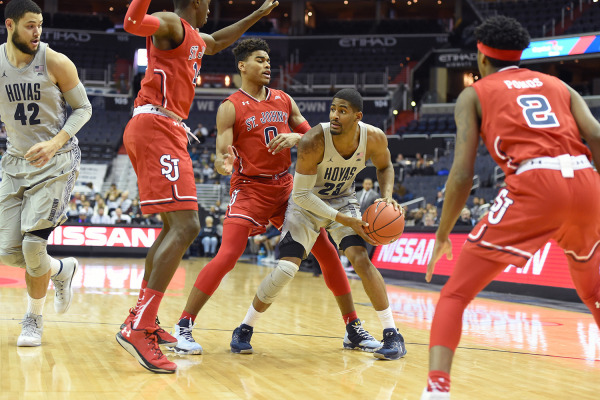 A big second half run from the Hoyas proved the deciding factor as Georgetown won its first Big East game of the season against St. John’s Monday night at the Verizon Center, scorching the Red Storm, 83-55. The win snaps a 10-game Big East losing streak, the longest in program history.

“To get one, it’s a better feeling than the other day,” said Georgetown Head Coach John Thompson III. “Now we have to just keep improving and move on.”

Junior guard L.J. Peak led the way for the Blue and Gray with 16 points, while freshman guard Jagan Mosely and graduate student guard Rodney Pryor followed closely behind with 13 each.

Pryor’s 13 come after being held scoreless against No. 18 Butler last Saturday, a rare occurrence for the Hoyas leading scorer. This season, Pryor is averaging 18.6 points per game. 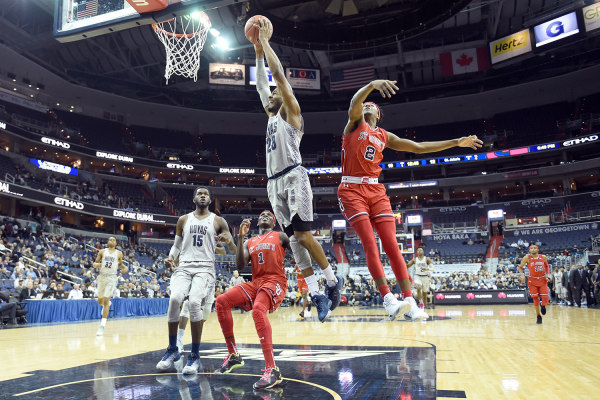 After a balanced first half from both teams featuring a strong defensive showing – the Hoyas held St. John’s to 37 points in the first period – GU came out aggressively to outscore the Red Storm 39 to 18 in the second period.

During the middle of the second half, Georgetown went on a 16-0 run that held the Red Storm scoreless for almost nine minutes.

“We wanted to limit them to one shot and focus on our rebounding and finishing plays,” Mosely said. The Hoyas outrebounded the Johnnies 50 to 30 and totaled 40 points in the paint.

Junior guard Tre Campbell sat out for his third straight game due to illness.

However, poor shooting plagued the Red Storm as they were held to only 27.6 percent from the field. The Johnnies also relied heavily on the three point shot but only hit 5 of 30 attempts.

“We have to give their defense credit, but we missed some decent looks,” said St. John’s Head Coach Chris Mullin. “Our energy and effort on both sides weren’t there.”

The Red Storm only made 16 field goals with 11 coming in the first half.

The Hoyas second half defense also proved effective, forcing 11 of St. John’s 15 turnovers on the night. “Our defensive execution was good. A lot of their misses, we made them miss,” Thompson said.

The Hoyas now have four days of rest as they prepare for a non-conference game against long time rival and American Athletic Conference convert the Connecticut Huskies. Thompson said the team will need the rest, and that he’d prefer not to have to play non-conference games in the middle of the Big East season.

“I like the UConn series. But with the timing of this when we had to do it. Personally at this point, I wish we could just lock in on conference play.”

The game against UConn tips off at 12:00 PM on Saturday, January 14th in the Verizon Center. It will be broadcasted on Fox.