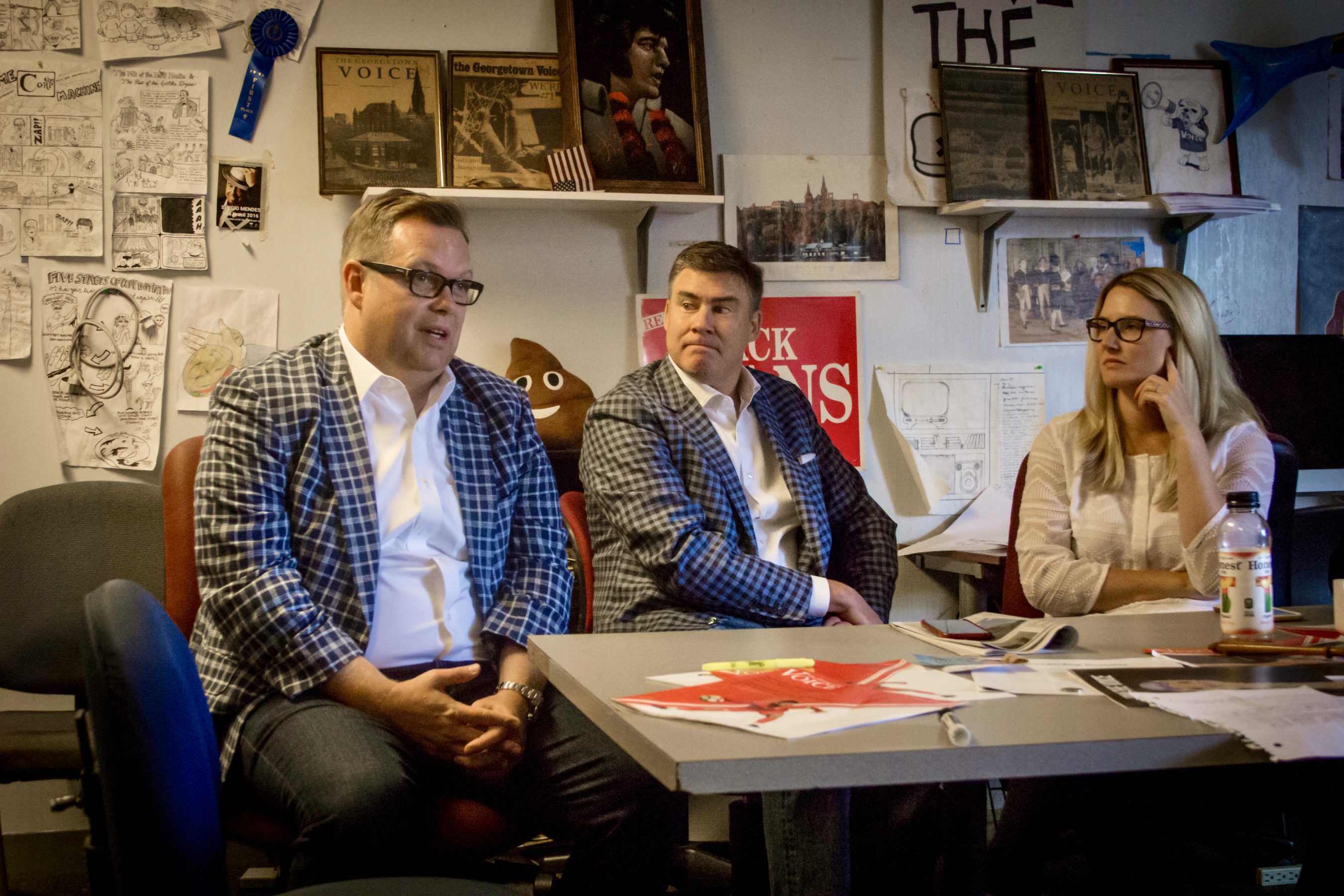 The Georgetown Institute of Politics and Public Service, an initiative of the McCourt School of Public Policy, recently invited its fall 2017 fellows to campus. On Friday, Sept. 8, the Voice interviewed the fellows, political experts who will directly interact with students throughout the semester during regular discussion group meetings.

Bonjean’s discussion group is titled “Is Politics at a Tipping Point?,” and will examine whether or not the 2016 presidential election represents a paradigm shift for American politics and political journalism.

“I do some speaking to student groups around Washington, and what I really love to do is to connect with younger people who have great ideas about how to solve the world’s problems. And the fact is right now Washington is broken,” said Bonjean. “I’d love to hear from students on what they think, and we’re going to explore a number of topics.”

Bonjean sees his participation in the fellows program the beginning of a new, mutually beneficial relationship. “I came here to give back, and to also hopefully broaden my own perspective from the students,” he said.

Mike Dubke is the former communications director for President Donald Trump’s administration and was a founder of Black Rock Group, a strategic communications firm.

Dubke’s discussion group is titled “The 24-Minute News Cycle: Reality Politics and Celebrity Surrogates in the Age of Fake News,” and will explore the effects of cable news and social media on public dialogue in the United States.

Dubke emphasized that his discussion group will introduce students to a wide range of contemporary subjects. “We’ll touch on leaks, we’ll touch on chyrons, we’ll touch on cable news nets, celebrity surrogates, other items such as ‘Do Sunday Shows Matter?,’ go a little bit more in-depth,” he said.

Dubke encourages Georgetown students looking to get involved with public service to keep an open mind. “Say yes to opportunities,” he said. “There is no set game plan if you want to have a career in this business.”

Marie Harf is a national security contributor to Fox News, and was formerly the senior advisor for strategic communications for Secretary of State John Kerry.

Harf’s discussion group is titled “A Trump Presidency Meets the World: Examining the Intersection of U.S. Foreign Policy and Domestic Policies Through a Tour of Global Hotspots,” and will look to present American foreign and domestic policy as complementary parts of an integrated system.

“Most of my background is in foreign policy and national security, the conventional wisdom has always been it’s not a domestic political issue. And it is! I think voters care about it,” said Harf. “I think, too often, students who study the foreign service in the School of Foreign Service don’t get enough on politics, and students who study politics don’t get enough on foreign policy.”

Harf hopes that students can complement their studies by exploring the Fellows program. “I know what you’re learning in your classroom and your textbook about how politics works, or about how foreign policy is looked at by voters, or how corporations influence things. We kind of want to pull back the curtain on some of this and say ‘Okay, here’s how that actually works in the real world,’” she said.

Patrick Murphy was the representative for Florida’s 18th Congressional District in the House of Representatives from 2013 to 2017. He was also the Democratic Party’s Senate candidate for Florida during the 2016 election.

Murphy’s discussion group is titled “Politics From the Millennial Point of View: One of the First Millennials in Congress Shares His Politics, Process, and Perspective for a More Representative Washington,” and will draw on his personal experience as a millennial elected to Congress to examine the policy issues that are most pressing for young people in America.

Murphy argued that his group will address a gap in current policy. “I think Congress should get in front of a lot of the issues that are actually concerning millennials. Student debt, the sharing economy, automation, artificial intelligence – all these things that most members quite frankly don’t care [about], don’t get, don’t understand at all,” he said.

Murphy thinks that Georgetown students should not be afraid to take risks. “Now is the time to push yourself out of your comfort zone. Whatever comfort zone you think you have now, it’s going to grow exponentially in the next 10 to 15 years of your life,” he said.

Liz Sidoti is the current head of US communications for BP, a multinational oil and gas company. She has previously worked as a national politics editor and political correspondent for the Associated Press.

Sidoti’s discussion group is titled “Open for Business: Corporate Engagement in Politics and Public Policy in an Unpredictable Era,” and will focus on how the 2016 election’s disruption of the political status quo has affected businesses’ strategies for engaging government.

“The old playbook of direct lobbying and political action committee contributions – those are just two tools,” said Sidoti. “The changes in the media environment and changes in how people consume their information also changes the way you influence, in Washington and in state capitals.”

Sidoti argues that students should accept that their professional lives may be unpredictable. “The one thing that I would hope to impart on students is ‘don’t get yourself so wedded to an idea of what you want to be when you grow up that you’re unwilling to explore other options and swerve,’” she said.