Home » By The Numbers » Changes Made to On-Campus Dining 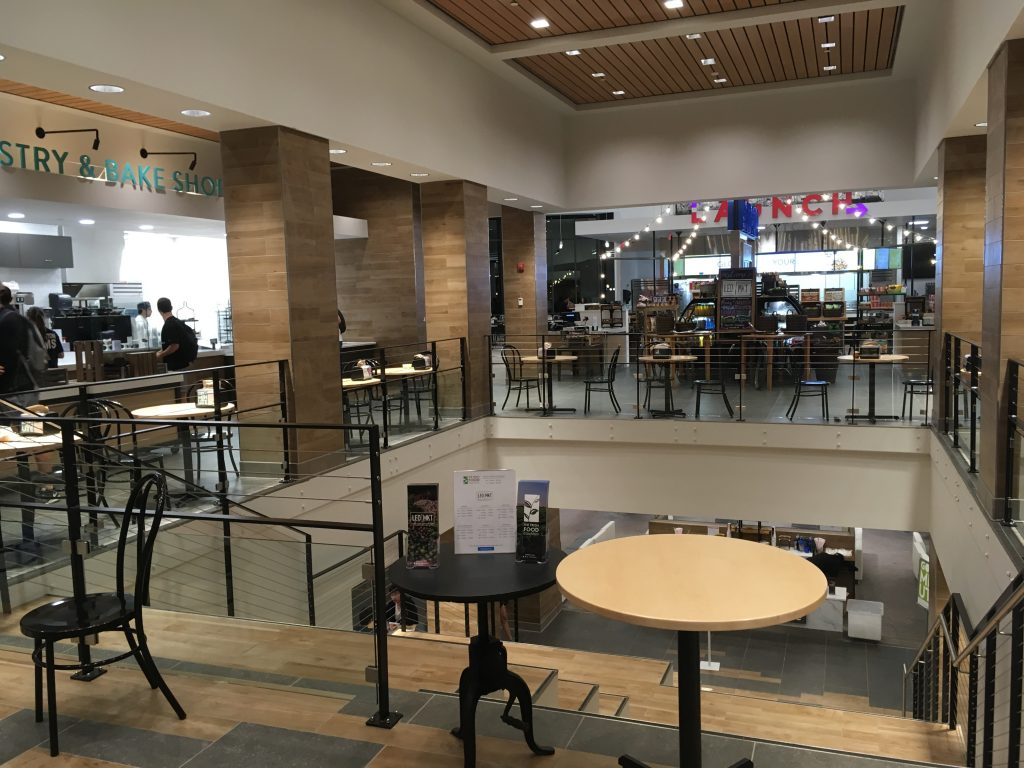 Changes Made to On-Campus Dining

Leo’s dining hall was renovated over the summer, with construction also taking place at Hoya Court, the bookstore, and Uncommon Grounds.

Joelle Wiese, associate vice president of Auxiliary Business Services said that the project was completed at an “aggressive” pace in two and a half months. “For the most part everything is done, it opened up well, and we’re working through just like any restaurant that opens up. Once you see what the business is like and where people are going and what students like, you make those adjustments,” Wiese said.

The new Chick-Fil-A is the only location not at full operation. Weise said that they need to meet corporate standards and for experience before expanding to their regular hours, which will include breakfast and a catering menu.

Leo’s  upper level is now LEO|MKT, a food court featuring five permanent locations, and Launch, featuring a different concept every week, and downstairs is the Fresh Food Company, a traditional dining hall. In the Leavey Center, Crop Chop is now alongside Chick-Fil-A, and Cosi was replaced by Royal Jacket. Crop Chop, Royal Jacket, and LEO|MKT are run by Lifeworks Restaurant Group, a division of Aramark.

To staff the new dining facilities, Weise said 120 new hires were made, and no layoffs were conducted.

The “All Access” dining plan, was introduced with the new facilities, and allows unlimited swipes and meal exchanges 5 or 7 days a week. Meal exchanges are now accepted all day, and were added at LEO|MKT, Crop Chop, Royal Jacket, and late night at Bulldog Tavern. Only Chick-Fil-A and Starbucks do not accept meal exchanges.

The other major change was the move of Uncommon Grounds from Sellinger Lounge to the second floor of the bookstore, which also received a renovation.

Leia Idliby (COL ‘18), the director of Uncommon Grounds, wrote in an email to the Voice, that she is looking forward to opening at the new location. “We already have some of our outdoor seating set up and are hopefully going to get hammocks on the Esplanade as well!,” Idliby wrote.

Uncommon Grounds will remain open even when the bookstore closes at 8pm, and can be accessed from the Leavey Esplanade and a staircase from Bulldog Alley after 8pm. The move makes the Corp the first group other than Starbucks to have a storefront in a Barnes & Noble property.

Idliby wrote that the drink menu will stay the same, but they are considering adding more food items. She also hopes that Uncommon Grounds will remain the student gathering place it has become. “We are still going to showcase student art on our walls and we’re still going to host Uncommon Sounds on Tuesday nights, which is our open mic night. ” Idliby wrote.

Three weeks into the semester, Weise ways that feedback has been mostly positive. “We’ve gotten tremendous feedback from the students as well as from the employees. The employees are excited because some of them are kind of running their own little restaurants now, and that gives them a nice thing to take home at the end of the day,” Weise said.

Loren Sumerlin, director of Business Operations Auxiliary Business Services said that they have been working closely with the dining committee and listening to their feedback. “I think the flexibility that was added both into the meal plans and the dining program this year is huge. And I think that as students settle in and get used to it and start to use it, I think it’ll be exciting to see what they do with it.” Sumerlin said.

Looking forward, Weise says there are plans to make changes and introduce new programs at LEO|MKT, including inviting local restaurants to Launch, catering menus from the various storefronts, and Tapingo service.