The Hoyas’ victory over a strong Bulldogs side marked the team’s Big East home opener and snapped a six-match losing streak. It also represents Georgetown’s first victory over Butler in program history. In a tense, nail-biting match, each set saw at least seven ties or lead changes and was decided by no more than nine points. The Hoyas were led by junior outside hitter Alyssa Sinnette, who recorded 17 kills, while junior middle blocker Symone Speech added 13 kills for the Hoyas, who were playing in their sixth five-set match of the season. The Hoyas showed their grit in the fifth set, battling from a 7-10 deficit by embarking on an 8-3 run to close out the match, capped by a decisive block on the final point by Sinnette. For the match, Georgetown finished with a 14.7 hitting percentage, lower than Butler’s 19.5, but owned a 12-2 advantage over the Bulldogs on service aces.

Georgetown could not repeat their performance from Friday night against Xavier, as the Hoyas battled against the Musketeers in each set, including earning multiple tie-breakers in the last game, but ultimately came up short. Georgetown held a lead in every set, including an early 7-1 advantage in the second set that was wiped away after a Xavier spurt. After the Hoyas prevailed 27-25 in the third set, the two teams engaged in a back-and-forth final set, before the Musketeers iced the set and match on a service ace. 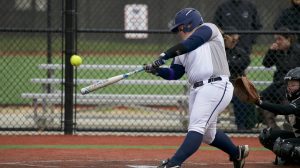