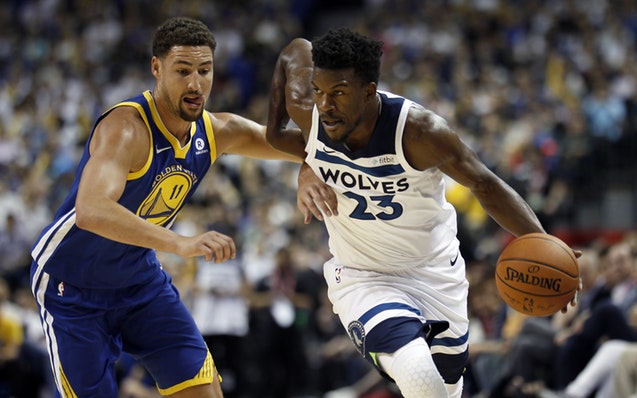 By all accounts, this was the wildest NBA offseason we have ever witnessed. It kicked off back in June with what experts are calling one of the deepest and most talented draft classes in recent memory. Then came free agency and with it the now typical exorbitant spending on colossal contracts for slightly above average players. Additionally, in a span of four months, we saw the record for largest contract in NBA history broken three times. Despite all this excitement, the highlights from a summer of drama were the stunning blockbuster trades involving star players, which shifted the balance of power throughout the league.

Out of the pandemonium emerged a distinctly altered league from the one that crowned the Golden State Warriors champions back on June 12th. Teams and individuals throughout the Association are now in markedly unfamiliar situations. Some are thankful for the way things turned out, while others are wishing it could have all gone down differently. Here are the winners and losers from the 2017 NBA offseason:

The Timberwolves had one of the most active offseasons of any team in the league. Their biggest move came on draft night when they shipped Kris Dunn, Zach Lavine, and the pick that became Lauri Markkanen in a trade to acquire Jimmy Butler and a pick used to select Justin Patton. Butler is undoubtedly one of the stars of the league. Last season was his best, and he has steadily improved each year in the league. Butler averaged 24 points per game and was named a starter for the Eastern Conference All Star Team. He will now join two of the best young talents in the league in Karl-Anthony Towns and Andrew Wiggins to form a legitimate Big Three. This move, along with key role player acquisitions of speedy point guard Jeff Teague and spectacular off-the-bench scorer Jamal Crawford, immediately makes the T-Wolves a playoff team and possibly even a contender out west. Some may point to the Warriors’ current dominance over the Western Conference as reason not to invest big in the present, but now is the perfect time for Minnesota to speed up its rebuild. Two-thirds of its Big Three have yet to reach their 23rd birthday, so the risk of not winning it all in the next couple years is far outweighed by the reward of finally becoming one of the better teams in the league for the first time since the Kevin Garnett era.

The Sixers finally got guards! After a seemingly eternal ritual of acquiring big men, Philadelphia decided to invest heavily in its backcourt this offseason. They traded up from the number three slot to select Washington point guard Markelle Fultz with the first overall pick in the draft. Fultz is a dynamic scorer with elite dribbling skills, impressive passing ability, and strong defensive potential to boot. In short, he has all the tools to be the star playmaking guard the Sixers have been missing. Philadelphia also used its sizable cap room to make a splash in free agency, signing Los Angeles Clippers shooting guard J.J. Redick to a $23 million one year contract. Redick has long been one of the best shooters in the league, finishing fifth in three point percentage last season. He will bring veteran leadership and much needed outside scoring to a young team that finished near the bottom of the league in nearly every shooting category last year. With these additions, it is difficult to point out a weakness in Philadelphia’s projected starting five. Everyone knows about the potential of Ben Simmons and Rookie of the Year finalists Joel Embiid and Dario Saric, but the moves this offseason were necessary to create an improved, more balanced roster. In a weakened Eastern Conference, there is no telling how far this team can go.

Speaking of that weakened Eastern Conference… The Western Conference’s dominance over the East has been no secret over the last several years, but this offseason it became laughable. Four All-Stars – Paul Millsap, Carmelo Anthony, Jimmy Butler, and Paul George – all packed their bags this offseason and headed west. So congratulations to Bradley Beal, Hassan Whiteside, Joel Embiid, Jabari Parker, Andre Drummond, Kristaps Porzingis, and all the other players who have a chance to make their first All-Star appearance because of the ever-growing vacuum of power in the Eastern Conference.

Ask and you shall receive. Irving sent shockwaves through the league back in July when he demanded a trade away from the Cleveland Cavaliers. Many were puzzled by his decision after three straight finals appearances as part of one of the greatest duos in NBA history with LeBron James. But he made it clear; he craved that Alpha Dog status. He was sick and tired of playing second fiddle to the greatest player of this generation and he wanted a chance to lead a team to success on his own. So, he requested a trade from the team that drafted him number one overall back in 2011, and the Cavs found a suitor in the Boston Celtics. Now a Celtic, Kyrie will have the keys to the organization. His new colleagues, Al Horford and Gordon Hayward, are All-Star level players, but they both are accustomed to sharing leadership with teammates. Essentially, Kyrie got exactly what he wanted: a chance to be the unquestioned leader of a serious title contender. Look out for that Cavs-Celtics matchup on opening day.

Presti, the Oklahoma City Thunder’s general manager, was under a lot of pressure going into this offseason. His MVP Russell Westbrook was going into a contract year and the Thunder were coming off a season that appeared to be just about as good as it was going to get with the current roster. If he did not want to lose two MVPs in a span of three years, he needed to act fast. That is exactly what he did. On July 6th, Presti traded Victor Oladipo and Domantas Sabonis for four-time All-Star Paul George. Just a few weeks into the offseason and he had already paired Westbrook with one of the best players in the league. But there were still concerns. Rumors were swirling that both George and Westbrook could bolt for Los Angeles next summer if the Thunder could not seriously contend for a title. Two months later, Presti was back at it with another blockbuster trade. This time, he moved Enes Kanter and Doug McDermott to the Knicks to acquire ten-time All-Star Carmelo Anthony. Essentially, he traded four role players to form one of the most impressive Big Threes in recent memory. Less than a week later, Westbrook signed a five-year contract extension quelling any fears about him leaving. Presti’s work this summer was phenomenal and makes him the favorite to win Executive of the Year.

I made mention of the Eastern Conference counterparts above, and the Western Conference Fringe All-Stars will essentially have the opposite result. The influx of star talent going from East to West will make it that much harder for those players who have history of being snubbed or have never been to the game at all. Damian Lillard has been brutally snubbed the past two seasons with huge scoring, assists, and efficiency ratings and that may continue with the addition of Jimmy Butler to an already stacked guard position in the West with Stephen Curry, Russell Westbrook, James Harden, and Chris Paul having been annual locks. Mike Conley, who has never made the team, will have even less of a chance now, having just celebrated his 30th birthday last week. Lamarcus Aldridge, who spoke out against his snub last year and had a marvelous preseason, must now contend with other forwards like Paul George, Carmelo Anthony, and Paul Millsap for a spot on the team.

It’s hard to say anything bad about the Warriors these days without sounding like a jealous hater and, truthfully, this isn’t an attack on the Warriors, but more a reflection of the teams surrounding them. The Western Conference contenders to the Golden State throne have simply gotten better this offseason. The Thunder and Timberwolves both formed Big Threes. The Houston Rockets added Chris Paul and held on to Clint Capela, Eric Gordon, and, of course, James Harden. And the San Antonio Spurs still have a Kawhi on their squad. The Warriors are still the clear favorite but their stranglehold on the West is beginning to loosen just a little.

I was considering writing “Cleveland Cavaliers” here, but I feel as though James embodies the entire organization at this point. The Cavs had an active offseason signing Jeff Green, Derrick Rose, and Dwyane Wade to relatively small one-year deals. Their headline move was the transaction that sent franchise point guard Kyrie Irving to the Celtics for Isaiah Thomas, Jae Crowder, Ante Zizic, and the Brooklyn Nets’ 2018 first round pick. A swap of Irving for Thomas at the point guard position seems relatively even to go along with a formidable role player in Crowder, but it will be devastating for the Cavaliers in pursuing the title this year. Irving is not exactly the best defender, but the Cavs could hide him relatively well against other contenders like the Celtics and the Warriors. The same cannot be said for Thomas. The 5’9” Thomas does not stand a chance trying to defend against the Oklahoma City Thunder’s lineup when they go big. He will be useless facing the Warriors with 6’3” Curry and 6’7” Klay Thompson in their backcourt. And he’ll have to come off the bench against the Celtics who are rumored to be starting 6’7” Jaylen Brown at the 2 and their best player at the 1.  The Cavs lost this trade, and James will have to work that much harder this season to bring his team back to the finals.

Those were an interesting three years for the legacy of the Zen Master. Phil Jackson spent much of his time as an executive with the New York Knicks struggling to cope with Carmelo Anthony as his franchise leader and handing out bad contracts. His latest blunders include a questionable 4-year $70 million contract for ex-Knick Tim Hardaway Jr. With the number eight pick in the draft, Jackson selected the nineteen year old Frenchman Frank Ntilinka, but it has been Dennis Smith Jr., taken with the ninth pick by the Dallas Mavericks who flashed serious star potential during preseason and whom many Knicks fans were anxiously hoping Jackson would take. To top it all off, Adrian Wojnarowski reported Thursday, per Bleacher Report, that Jackson is rumored to have surprised free agents with his lack of preparation as general manager. Overall, the last couple years have done a number on Jackson’s esteemed resume of success in this league.

This offseason put an end to Chris Paul’s chances of ever being the unquestioned leader of a championship team. He’ll likely never be able to pursue the MVP award or the Finals MVP award ever again, symbolizing his inability to ever break into that elite class of generation-defining players. The silver lining is that he will now be in a situation in Houston where he can better compete for a title on Harden’s club. It remains to be seen how long it will take for two of the top 8 most ball dominant players in the league to find chemistry on the court. Paul could struggle for the first time in his career when he is not allowed to dribble the ball for all twenty-four seconds each possession. Of course, the duo may prove to be a triumphant success, but it will undoubtedly be Harden leading the way with Paul now a secondary player. 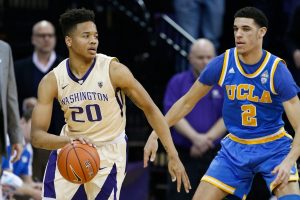 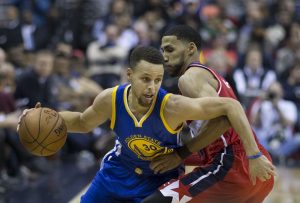