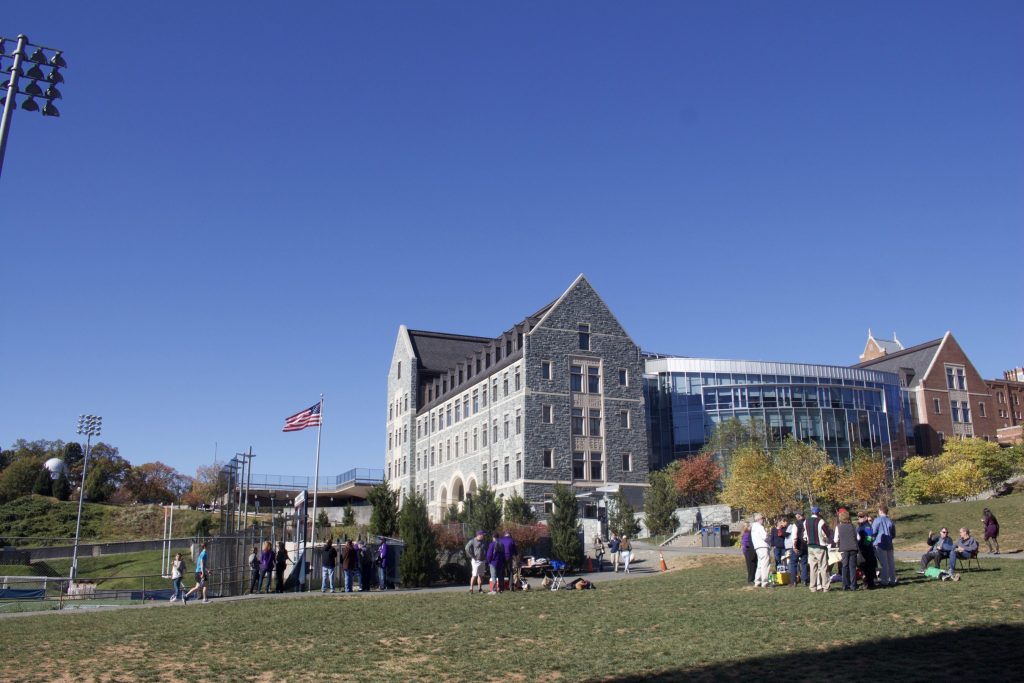 Brett Schulman, CEO of Cava, and Todd Klein, a partner at Revolution Growth, spoke to students in the Fisher Colloquium Monday night as part of the Food Entrepreneurship Series. Cava, a fast-casual restaurant chain which began in Washington, serves healthy Mediterranean food at its numerous restaurants around the country and sells its products at Whole Foods. Revolution Growth is a venture capital firm which invests in Cava.

During the discussion Schulman emphasized the influence of technology in the food world, and Cava’s capitalization on the shift towards accommodating health-conscious eaters.

“One of the things we work on in our restaurants specifically is we’ve launched a couple pieces of software infrastructure, whether it’s labor scheduling or food ordering,[or] ingredient ordering with our data team, starting to really hone our forecasting tools so we can automate that more and more,” he said. “Our leadership in the restaurants and our team members spend less time in the back of the house, and more of the time working on hospitality and food.”

Schulman also explained how Cava implements technology to foster a greater relationship with their customers and influence them outside the restaurant.“Understanding that you come in and get two scoops of harissa in your bowl every week, we can send you recipe cards and additional coupons to go to Whole Foods to get an 8 oz. container of harissa, and here’s how to make harissa marinated shrimp at home,” he said.  “So [we] really create a value adding a more human experience.”

Klein touched on the relevance of technology in the evolving food market as well. “Part of the influence that we see in food service and packaged goods and so forth, is kind of integrating some of the technologies that help companies identify and connect with their ideal customer, and build those relationships in a way that very different than historically,” he said.

As for the health aspect, Schulman harped on American’s changing perception of the value of their diet. “People are representing themselves not by what they own anymore, but by what they experience. So they want to go on a culinary adventure,” said Schulman. “They are very much in tune and care more about shifting some of their spending into what goes inside their body, versus what goes outside their bodies.”

According to Schulman, this truth has contributed to Cava’s success. “That’s been a cultural shift that I think has helped drive this,” he said.

Additionally, in the realm of health-awareness, Cava prides themselves in maintaining strong connections with their food sources. “We try and really establish great relationships and support our … grower and rancher farmers, and curate high-quality ingredients for you,” Schulman said.

With that, he assured the audience that at Cava, healthy does not mean tasteless. “You don’t have make any sacrifices for taste, or for satisfaction, or fulfillment. You can walk in, eat at Cava and have eaten better,” he said. “You don’t have to conform to our menu– our menu conforms to you.”

Alex Heintze (MSB’19) helped facilitate the event. He and Brittany Arnett (COL’19) organize and moderate all the Food Entrepreneurship Series panels. Outside of this, the pair is very involved in the Georgetown food scene, together having founded the Georgetown Eating Society.

As for his inspiration for the series, Heintze reflected on his participation in the Corp. “The idea spread out of students of Georgetown Incorporated, or the Corp, during my sophomore fall, when I was hired into their marketing department,” he said. He noted that the event is also sponsored by other Georgetown programs, including, Startup Hoyas, GU Eating Society and Spoon University Georgetown. This event is the third of its kind thus far, with the fourth occurring at the end of the month.

Heintze believes in the value of exposing college students to local food industry entrepreneurs and investors such at Klein and Schulman.

“It’s just a great way to showcase the stories of people doing cool things in the D.C. area, and a cool way for Georgetown students to learn about career options down the line.”