Hillary Clinton spoke at Gaston Hall Feb. 6 with the Georgetown Institute for Women, Peace, and Security to present the 2018 Hillary R. Clinton Awards for Advancing Women in Peace and Security. The awards annually recognize global leadership in women’s rights and security.

The Institute also gave BBC journalist Lyse Doucet the Global Trailblazer Award for her work reporting on women and children conflict zones. Doucet then moderated a conversation between Murad, Nu, Secretary Clinton, and the audience.

“I have seen that women are not only victims of war and conflict, but they are agents of change, makers of peace, and drivers of progress,” Clinton said in her opening remarks. “That was truly the belief behind the creation of the Georgetown Institute for Women in Peace and Security.”

Clinton is the honorary founder of the Institute, which opened in 2011. Executive Director Melanne Verveer, former U.S. Ambassador-at-Large for Global Women’s Issues, took the stage after Clinton’s speech to present the awards.

Awardees Murad and Nu both experienced imprisonment and abuse at young ages, and have gone on to high-profile careers in human rights advocacy.

ISIS held Murad, a Yazidi woman from Iraq, captive for months until she escaped and later entered Germany as a refugee. In September 2016, Murad became the first United Nations Goodwill Ambassador for the Dignity of Survivors of Human Trafficking. She advocates internationally for the Yazidis, refugees, and survivors of sexual violence.

Murad emphasized the urgency of her work in her remarks on Monday.

“The things that we hope for and the things that we work for still aren’t accomplished,” she said via a translator. “But I’m hopeful that we still have energy to fight and to bring ISIS to justice.”

Nu, a member of the Muslim Rohingya minority in Myanmar, delivered a similar message to the audience.

“At the end of the day, it is your responsibility to respond and work on [injustice],” she said.

The Rohingya have experienced decades of persecution at the hands of the state, garnering international attention in 2016, following a widespread military crackdown.

The Burmese government imprisoned Nu’s family for years while she was a child for her father’s political views. Following their release in 2012, Nu went to law school and later founded the organization Women’s Peace Network Arakan. The network works to better relations between the Rohingya and Rakhine groups in Myanmar.

Nu described the hope that she has for eventual justice for her people and women around the world.

Clinton presented at the same ceremony last year, in her first appearance after the 2016 election. The university honored four Colombian women for their work in the peace treaty between FARC and the state.

Throughout this year’s event, Clinton pushed for the advancement of women within the United States, describing what she saw as an “inflection point” in the issue domestically.

She expressed her hope for the movement towards women’s rights and equality.

“We are not going back,” Clinton said. “And women’s voices are not shutting up. 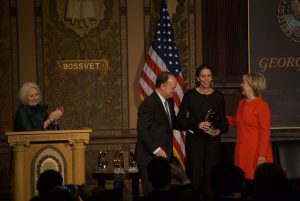