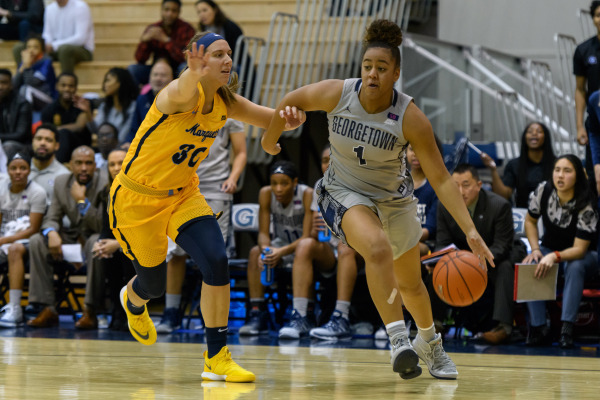 In a very back and forth game, Georgetown rallied back from being down 61-54 going into the fourth quarter. The Hoyas mounted a furious comeback behind their stellar defense, preventing the Blue Demons from putting them away. The Blue and Grey were led by junior guard Dionna White who poured in a career-high 33 points. Senior guard Cynthia Petke also chipped in 23 points and 11 rebounds for her 14th double-double of the season.

Sophomore guard Morgan Smith’s offensive rebound and putback gave the Hoyas the lead in the final seconds, putting away the Blue Demons.

The Golden Eagles are fresh off a 90-69 win over Villanova (20-6, 10-5 Big East). Junior guard Natisha Hiedeman led the way with 26 points, including three buckets from beyond the arc. Junior forward Erika Davenport also contributed 16 points and 8 rebounds. On the season, Hiedeman is the second leading scorer on the team, averaging 13.2 points a game. Davenport is the fourth leading scorer, averaging 12.2 points and 8.2 rebounds a game.

The Hoyas won their last matchup with the Golden Eagles in a decisive 85-58 win at McDonough Arena. The Golden Eagles are a high scoring team, routinely putting up 80-90 points each game. The Hoyas will have to play defense similar to their late game defense against DePaul to get a second win against Marquette this season.

Sunday’s game is scheduled for a 3:00 p.m. ET tip-off. It will be broadcast on the Big East Digital Network. Follow @GUVoiceSports on Twitter for game day updates and breaking news. 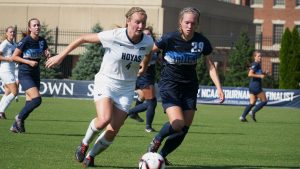 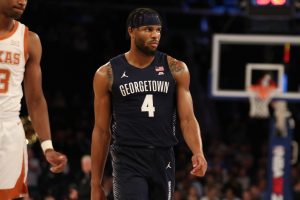