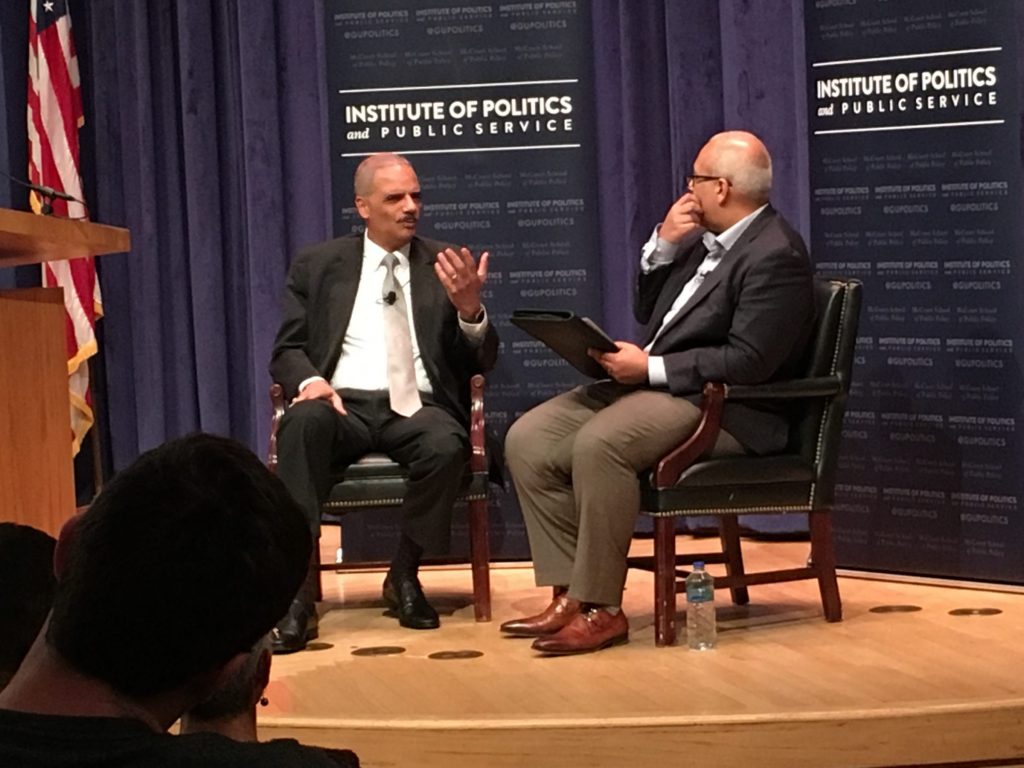 Holder said the desire to create safe districts, thereby protecting incumbent politicians, motivates politicians to gerrymander their districts in a way favorable to the politicians’ success.

“Politicians are picking their voters instead of citizens choosing who their representatives are,” he said.

Holder, who was appointed by President Barack Obama, defined gerrymandering as “packing and cracking, putting people together, separating them.” He stressed the dangers of the practice, explaining that it contributes to institutional “dysfunction” in the political system.

“[As a Republican,] your concern is not dealing with a general election because you’re in a safe district,” Holder said. “You’re worried about making the primary, and so you want to make sure that you’re far enough to the right so that somebody doesn’t come in and out ‘conservative’ you.”

He said that manipulating district boundaries intensifies the polarization and partisanship of Congress because candidates are pushed to the extremes of the political spectrum during their elections.

“It means that Congress feels no incentive for people to talk to one another across the aisle,” Holder said. “In fact, that would be seen as a sign of weakness that can be exploited.”

Despite his criticism of Republican behavior, he said that Democrats have attempted gerrymandering as well— especially in Maryland and Illinois. Despite this, Holder still believes Republicans have contributed more to gerrymandering than Democrats.

“There are instances where you could probably point to where I’d say, ‘Democrats have not played fairly,’” he said. “But it pales in comparison to what the Republicans do.”

Molly Ledwith (COL ’20), who attended the event, said she valued Holder’s candidness in regards to Democrats’ involvement in gerrymandering.

“One big takeaway I had from Eric Holder’s speech was the fact that it’s an issue that both parties have helped create,” Ledwith said. “So it’s not something that just Republicans have been using, but it’s something that Democrats have as well, which I appreciated that he recognized that.”

Currently, Holder and his team at the National Democratic Redistricting Committee are focused on 12 states and are setting their sights on the midterm elections this November.

“The thought is to elect people in 2018, generally 4-year terms, these are the people, come 2021, are the people that will be responsible for the redistricting after the 2020 census,” Holder said.

Holder also announced that they will soon be filing lawsuits against three southern states on the subject of gerrymandering.

Apart from gerrymandering, Holder provided some of his perspectives on the influx of news surrounding the White House, including his predictions of the potential termination of Special Council Director Robert Mueller.

“There is the question of what happened with the Trump businesses, enterprises, entities in Russia that I think Bob Mueller has to look at,” Holder said. “And I think [this] that could lead the president to terminate Bob Mueller. I think it’s entirely possible.”

Holder said he is considering a presidential run, but will look to his wife and kids to see if they are ready to withstand the challenges a campaign would bring. He also said he is contemplating what his potential presidency would offer Americans.

“If we decide to do it… what is it that we can bring, that would be somewhat unique?” Holder said. “What would we do that would make this country better to unify what I think is a fractured nation?”

Before concluding the event, Holder addressed the audience and Georgetown students directly.

“This is a place that produces leaders, and that’s what you all are,” Holder said. “You are leaders in this country in the 21st century. And I think it is incumbent upon yourselves to think about the responsibility that you have as leaders.”

He recognized Georgetown students will follow many different career paths, but he encouraged continued participation and investment in the enrichment of the nation regardless of where students find themselves.

“I hope you can find time and engage in that civic responsibility,” Holder said.“You can find ways in which you can make this country better.”

Open Access: On the Aftermath of My Grandmother’s Death
Tomb Raider Was All Action, and That’s Not a Bad Thing