Juliana: I tend to be a bit skeptical when it comes to Pixar sequels, because they never seem to be as great as the classics. That being said, I’M SO EXCITED FOR THIS ONE! Seriously, how long have we been waiting for it? I’m super happy that all of my favorite characters are back, including Edna Mode, who thankfully still has all of her charm and sass from the original. I also love how Bob Odenkirk’s character looks like an animated version of him. As for the franchise’s new villains, the Screenslaver, I don’t know how to feel about him. We get a glimpse of him towards the end, and the internet provides some interesting context for his backstory (seriously recommend checking it out), but there’s just not enough to tell whether he’ll be great or not. Personally, I’d like it if they kept the theme they had going on with the last villain, Syndrome, and have a non-superhuman confronting the super Parr family instead of simply giving this one superpowers. But who am I kidding? I knew I was buying tickets for this film the second I heard The Incredibles’ theme song.

Sam: Finally, after fourteen years! The Incredibles was arguably one of the best animated pictures pictures in Pixar history, and I have faith in them to meet our expectations for a sequel—just like they did for the Toy Story series. Even if it doesn’t live up to the original, I’m sure there will still be lots to love. It looks like Mrs. Incredible will be the star of this film, and I’m very interested to see how Pixar will handle this gender role reversal teased in the trailer. Might be my most anticipated film of the summer

Dajour: The Incredibles is one of the movies that I will always hold near and dear to my heart, right alongside The Lion King and Mulan. With that being said, the idea of a sequel over a decade later makes me simultaneously excited and terrified. This trailer has me leaning more towards excited, though. I am really digging the whole stay-at-home dad role their giving Bob (the “math is math” scene in particular made me laugh out loud). I worry slightly that Helen’s role will be a bit understated, but I trust them to give us some fun scenes of her taking down some bad guys. This trailer does really seem to understate the villain though, only giving us a glimpse of him at the end. Syndrome was one of the best parts of the first movie, so I’m a little worried that this villain won’t live up. Either way, I’m still remaining cautiously optimistic that this movie will be incredible (ha).

Claire: The first The Incredibles movie was probably one of my all time favorite childhood animated films. It was funny, suspenseful, action-packed, and perfect for my young self to watch over and over again. There’s been near-constant hype for the sequel, which is coming 14 years after the original. For me, 14 years is just too long to wait to still be excited. I like the idea of having the mother being the breadwinner and forcing Mr. Incredible to deal with homelife and raising the kids, but other than that there didn’t seem to be much difference from the trailer between the first movie and the new one. Themes, phrases, and plotlines all seemed to be almost directly picked up from the original, and seeing as they had a decade and a half to make an amazing second movie, I’m a little disappointed. With the excruciatingly long wait, The Incredibles sequel has to be amazing, it has to be the best animated movie of the year, but this trailer makes me worry that it’ll just be a flop.

Juliana: Between this and Jurassic Park: The Fallen Kingdom, there seems to be a recent trend of small children being traumatized by giant scary monsters, and at this point, I’ve become too desensitized to actually worry about this kid. The MEG feels like your typical “big monster” movie, with plenty of explosions and running. However, the mega monster is a shark, so we might end up getting much cooler shots than your stereotypical monster-crushing-buildings scenes. The film also seems to be fully aware of how scary the deep ocean is. I mean, that squid crushing that submarine is the stuff of nightmares, but it’s also not the kind of nightmare we usually see in movies. There are definitely things that could make this movie unique, but it’s a shame it’s coming out in a time where there’s a new giant-monster-destroying-everything movie every couple of months. To be honest, if I’m not even worried about a kid in a submarine, am I really going to be worried about the fate of humanity? Probably not.

Sam: Summer is almost here, and for moviegoers this means the release of highly anticipated big-budget blockbusters like Deadpool 2 and Solo: A Star Wars Story. Don’t get me wrong, I love a good action-packed popcorn flick, but every now and again we get movies like The MEG (short for Megalodon, I presume?), that are so outrageous and nonsensical that audiences can’t help but laugh. The trailer is a bizarre mashup of horror, comedy, and action that tonally didn’t sit well for me. Look, I’m not saying this is going this is going to be the next Sharknado, but c’mon, it’s directed by the man responsible for National Treasure—what do you expect?

Dajour: Okay, so for about the first half or so of this trailer, I thought I knew exactly what this movie was: a scary shark movie. After that, I pretty much had the movie all figured out in my head. But then, Rainn Wilson showed up and the tone completely shifted. All of a sudden, I was chuckling and now I’m kind of confused as to whether I’m meant to be scared of this Megalodon. And then I looked The MEG up and saw that the tagline on the poster is “Pleased to Eat You.” So I think they’re going for a more comedic tone, and, if that is the case, then I am all in for this movie. The shark itself looks pretty badass, Rainn Wilson makes me happy, and the summer is always a good time for a movie like this. Plus, the movie is being released on my birthday so I’m here for this. Hopefully they’re able to maintain a nice balanced tone throughout the actual film, though.

Claire: Like Dajour, I don’t know whether to be spooked or truly terrified or waiting in suspense or stifling laughs. Is this a horror or a thriller or a comedy? Or is it trying to be all three? Or is it just doing a really bad job of trying to recreate Jaws? Honestly, I would see the movie just to find out for sure. Maybe the whole point of the trailer is to leave viewers wanting to know what the actual point of the film is, and the only way to find out is to watch the whole thing. However, large sharks do very much scare me, so even if this movie is trying to be a comedy, I’m gonna be spooked regardless.

Juliana: How did Timothée Chalamet go from being a cool kid in Lady Bird to a significantly less cool kid in Hot Summer Nights is beyond me. This film feels like a coming-of-age story involving a drug deal, a girl, and a ton of trippy effects. It’s a pretty good combo, and there’s definitely the potential for this having an interesting storyline. I didn’t really understand what happened in the second half of the trailer, but part of me likes the mystery of that. This probably won’t end up being my favorite Chalamet movie, but I might end up watching it to figure out how it all connects.

Sam: If Call Me By Your Name didn’t already give you Chalamania, you’re sure to get a fix this summer when Chalamet leaves his Italian villa for Cape Cod in the 90’s drug-fueled coming-of-age flick Hot Summer Nights. I’m in love with this trailer, especially how the funky, psychedelic song Vitamin C (yes, you heard this from PTA’s Inherent Vice) contrasts with the beautiful piano solo at the end, making it seem wonderfully weird yet full of heart. I’m also glad to see Maika Monroe take this project, too. She was fantastic in It Follows and I’m excited to see her in something a little lighter.

Dajour: Timothée Chalamet, you sly devil. I’d see anything he is in at this point, so the question isn’t whether I’m going to see this movie—it’s if I’ll like it, and I think I will. I have a small reservation though. Based off the scenes we got between them in the beginning of the trailer, I’m not certain I’m going to like the romance between Chalamet and Malika Monroe’s characters. This could just be me missing Armie Hammer and the beautiful backdrop of Italy, but I genuinely did find the dialogue (particularly in the carnival scene) kind of cringe-worthy. That was only one short scene though, so I won’t write that whole storyline off completely. I was, however, really into the drug dealing storyline. I love a good kid-in-over-his-head story, and Chalamet can sell that perfectly. This movie also looks really cool from a filmmaking standpoint. There are some cool shots and the editing is nice and trippy. Overall, I’m mildly excited for this film—and not just because of Chalamet.

Claire: Okay, first of all Timothée Chalamet could cut my entire arm off and I would still be obsessed with him. Actually that might make me more obsessed with him (Halftime is a no judgement zone, people). This movie seems like it’s catering to the cool high school crowd, but there may be enough of Chalamet’s face to get me through it complaint-free. Additionally, I trust A24 with anything so I trust them with this—let’s hope that it’s not a let-down. The idea of white teenagers getting in over their heads with drug dealing is interesting but a little off-putting in the sense that I doubt you’d see a film with black teenagers getting away with the same shenanigans. Something about rich suburbanites summering in Cape Cod and becoming drug dealers isn’t too appealing to me as a plot line. And I didn’t see a single minority in the cast which is problematic. But again, Timothée Chalamet. I’m honestly torn. 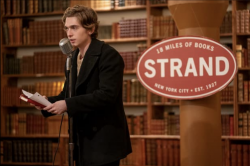 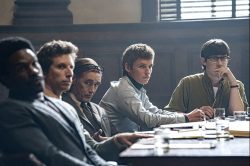 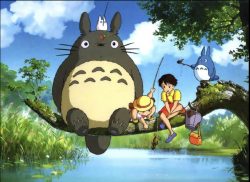 QUIZ: Which Studio Ghibli movie are you?